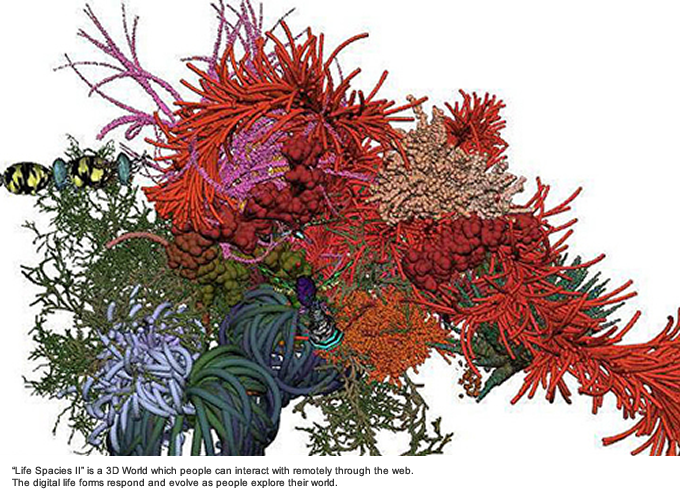 “It may very well be said that information is the irreducible kernel from which everything else flows, hence the question why nature appears quantized is simply a consequence of the fact that information itself is quantized by necessity.” (p.3) Anton Zeilinger, Why the Quantum? It from Bit? A Participatory Universe?, (“The Global Spiral, Metanexus Online”, March 25, 2002).

Information theory proposes that there is a fundamental element the bit- a binary variable- that is the basis of all communication. As it turns out, this bit, a discrete indivisible entity, is the essential building block of both computer code and quantum particles.

Both the physical and digital reality are composed of the same quantized binary bits of information. Reality, regardless of it’s content, is nothing more than the information it communicates.

“Historically, much of fundamental physics has been concerned with discovering the fundamental particles of nature and the equations which describe thier motions and interactions. It now appears that a different programe may be equally important: to discover the ways that nature allows, and prevents, information to be expressed and manipulated, rather than particles to move.” (Steane, A.M. (1998) Quantum Computing, “Reports on Progress in Physics 61”, p.119.) 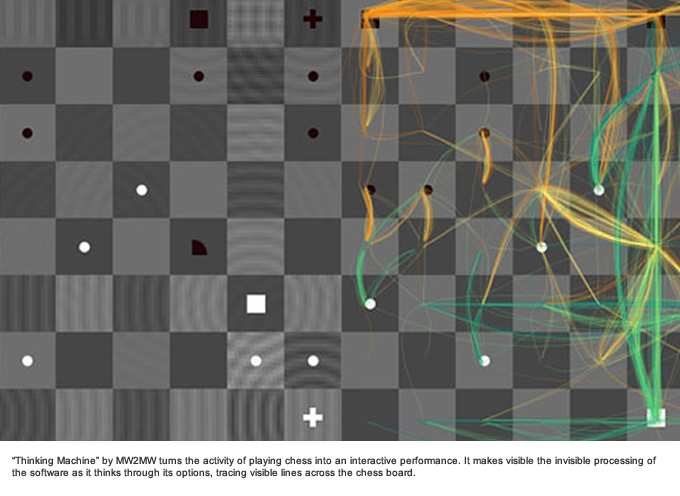 Quantum theory proposes that the energy of a force is transmitted in discrete indivisible entities, called quanta. These quanta represent the smallest elements of nature. The fact that energy can be quantized into tiny units of quanta is equivalent to reducing a moving two dimensional image into tiny bits of information that make up a string of computer code.

Information theory has merged with our quantum understanding of matter so that the state of any system can be described in terms of how it stores these ‘bits’ of information.

The quantum state of an atom – a qubit – can be transferred between atoms. This action, termed quantum teleportation casues the original is destroyed due to the no-cloning rule. However, there is no fundmental difference between the original atom and the copy. Quantum mechanics doesn’t distinguish one atom from another. The only difference is the quantum information they carry.

If you had a teleportation device then it wouldn’t be your atoms that are teleported and reassembled, but rather the quantum information responsible for assembling a group of anonymous atoms into you This leads to a metaphysical question: namely, is the copy really you? Qauntum mechanics proposes that information is as real as any other property we give to atomsl such as spin, velocity, or mass.

Since the bit of information is considered a real physcial element, the act of observation; the transmittal and reception of information, constitutes a real physical exchange. In order to see something you have to bounce a photon off of it. This changes the thing you are observing.

This represents a radical break with classical mechanics which views observations as cognitive events with no physical consequences. The transfer of information during measurement involves taking something away: a bit of information. This bit of information enters your nueral system and joins the endless information flow leading to your brain. 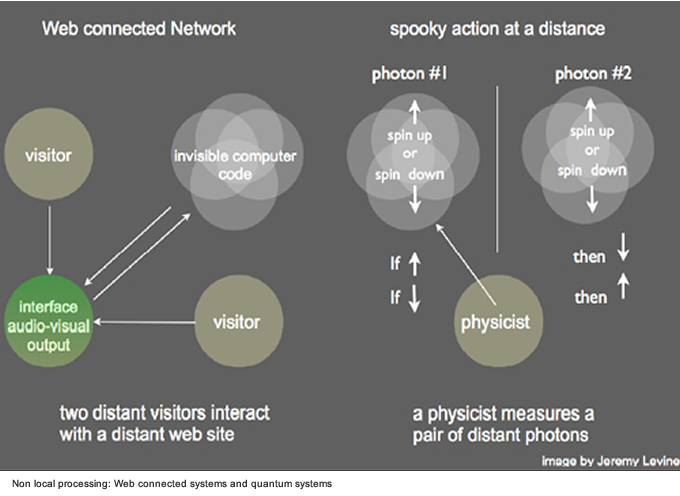 The bit is a binary element capable of expressing the fundamental paradoxes ambiguity and indeterminacy of quantum mechanics. Rather than merely yes or no, the quantum bit can behave as if things are both “yes” and “no”; “on” and “off” ; “particle” or “wave”. This state of superposition be maintaned until that quantum bit is involved in an interaction with something beyond itself . Since interactions occur constantly in the universe, whether itʼs from probing sciensts or invisible particles, superposition is an ephemeral state. It is analagous to Aristotle
Potentia to which we have referred.

“it seems that the act of living can be seen as the act of replicating and preseriving information despite Nature’s attempts to dissipate and destroy it. (Information theory is revealing the answer to the age-old question, What is life? That answer is quite disturbing).” (Charles Seife, p.87)

Like a work of net art that is continually interacting with the word wide web, Nature (the universe) is continually taking measurements of everything, flooding the universe with particles. These particles allow you to perceive your surroundings as photon bounces off the things around us and into our eyes where we register the effects as images. Without the photon you would not see the tree. Yet even if you close your eyes, one is still bombarded with information from sounds, smell, touch. Every gust of wind carries countless bits of information from tree to tree. Contrary to Berkley who believed that trees fall noiselessly in the woods without human ears to hear, the information that is carried on the sound wave is distributed as a “real” property.

Information Theory is also the bridge between Relativity and quantum mechanics. Information is only correct from the point of view of a given observer. This explains why observers viewing the same event can perceive different things. An event only occurs from your perspective when the information from that event’s occurence reaches you. An event doesn’t really happen until that information (travelling at the speed of light) reaches you.” (Seife, p.140) Perception is reality. 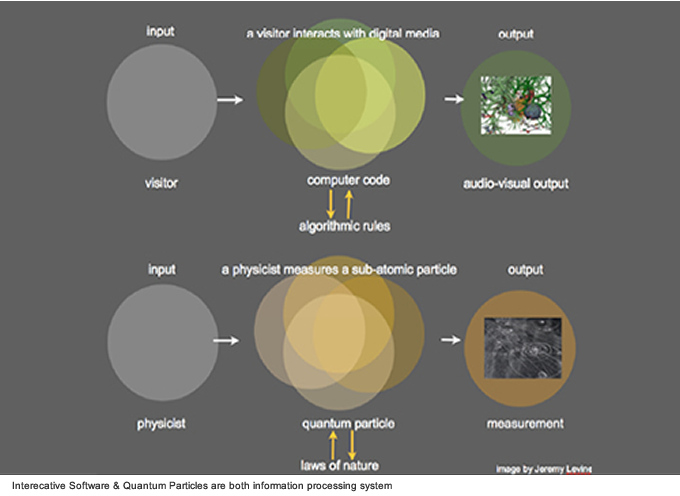 The experience of net art is interactive event much like the interactive event of measurement in which a question is posed to the universe and it answers by confirming or denying our expectation, injecting a bit of information into the world.

This bit of information becomes a real part of the world in a practical sense, since the information contained in this bit, a yes or no answer, will provoke a real response in us. The bit effects our behavior such that itʼs reality can not be pragmatically challenged.

This bit of information is every bit as real as the computer bit that makes up a line of software code. This quantum version of reality, composed of information, mirrors the world wide web which is nothing but information.

Is it any wonder that cyber space takes on the quality of another reality given that itʼs made of the same stuff, namely information. The difference between physical reality and cyber reality is in the way this information is structured and communicated. 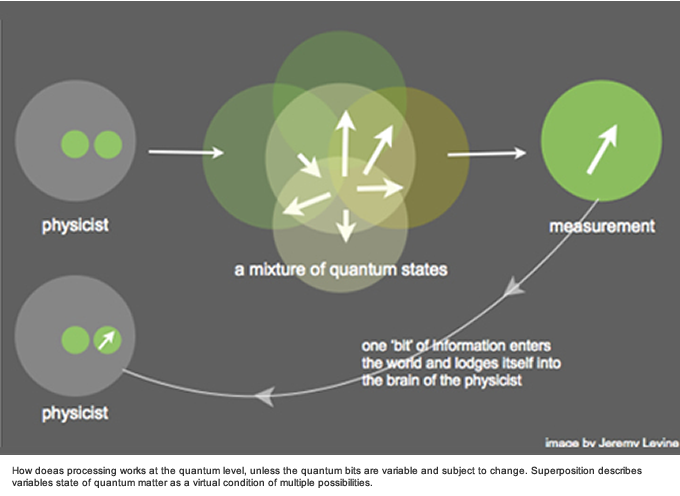 We can’t find life in a single atom, but when enough of them are ordered beyond a critical threshold of complexity, life emerges. In philosophical terms, this is physical monism, but conceptual dualism. In quantum mechanical terms matter is composed of expresses itself as either particles or waves. The world wide web can be described with the same conceptual dualism: in reductive, atomistic, mechanical terms, that describe the strings of bits that make code the computer and in holistic terms that describe the emergence of the interactive digital aesthetics of the work of net art.

Like the descirptioun of life, or a quantum wave, the aesthetic performance of a net art project cannot be reduced to it’s mechanical parts. The string of anonymous bits of code manifests itself in different ways depending up the interactions of the outside world.

New Media curator Christiane Paul notes, “there is a peculiar relationship between the mostly hidden backend of code which constitute a convergence of language and mathematics- and the multi-sensory display it can produce: an identity in the sense of a sameness in different instances (code/results), each of which takes a very different form yet, on one level, is one and the same.” (Christiane Paul, “Not Just Art”-from Media Art to Artware”, Spanish, Paul, p.104). 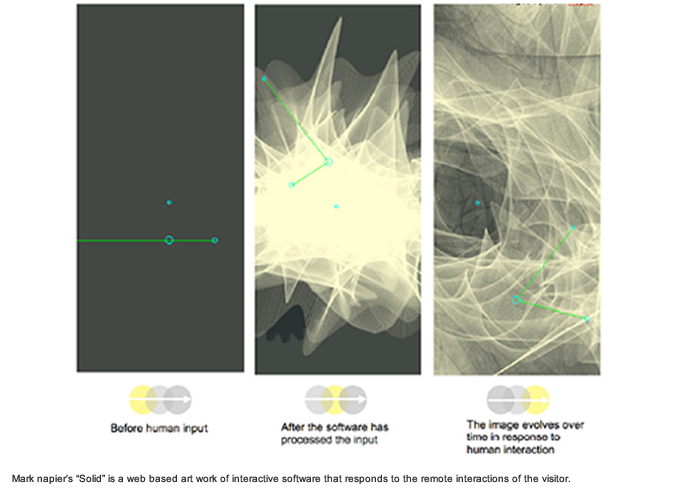 Quantum teleportation, the transmission of information, is analagous to the electornic two-way communication that occurs between a live person sitting at their computer and a work of net art. It’s not important whether the atoms inside your computer screen actually travel through a fiber optic cable across the Atlantic to some distant server, but rather, like the qubit, it is the information that makes the journey.

Much like the measurement event of quantum mechanics our interactions with net art produces new information. For instance, a work of net art may ask us a question. This results in the injection of a binary bit of information into the world. This bit of information becomes a real part of the world, since the information contained in this bit, a yes or no answer, will provoke a real response in the work and in others who might be interacting with the same project.