Human, Water And Environment. Between Multimedia And Sustainability 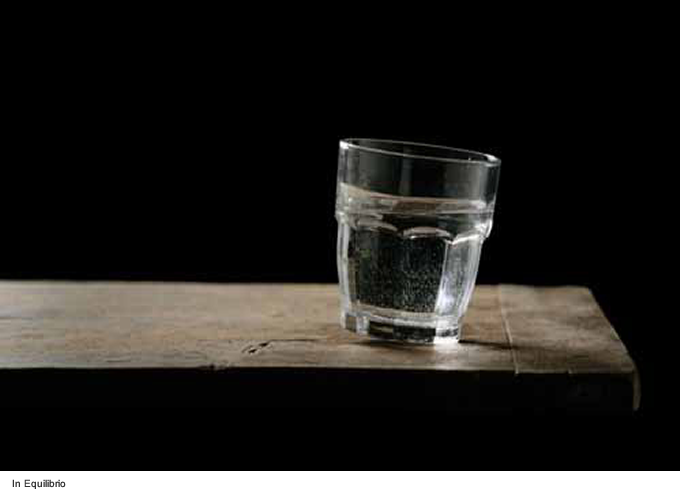 The topic of water in the multimedia, electronic and digital field is huge since the beginning of electronic art and works of art of famous artists such as Bill Viola and Fabrizio Plessi, only to mention a few. Water has been compared to the electron flow and video, exactly for its liquid and mobile nature, is par excellence the mean which is the most linked and compared to this element essence.

I don’t want to add to an already rich list the last analysis on metaphors between water and visual flow in video art. I rather think it would be more interesting to find possible examples of how art instruments and practices are refashioning an urgency, i.e. the privatization of water resources. The multimedia art is adsorbing, interpreting and denouncing in its own way this problem.

Water is therefore not only a consonant and evocative element of works of art, but also as main theme of the artistic activity, as matter and content which wants and must give birth to a meditation about those entities and policies that haggle over commodities with poker that try to sell us something which already belongs to us.

This article doesn’t aim at being exhaustive. It wants rather to start a meditation on this topic, encourage the researches in the digital field. I left from Milan, form students’ and young people’s world, to go on and see how the works of emerging artists talk about these themes 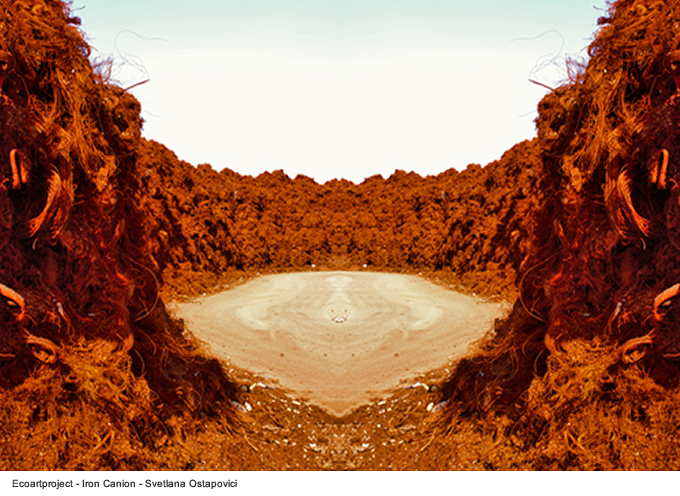 During the event Posti di Vista – Green Block, which took place at Fabbrica del Vapore in Milan from 15 to 19 April 2010 and which is an exhibition of multimedia installations [in_equilibrio] organized by Aiace/Invideo in cooperation with IED Arti Visive, hosted three installations linked to the topic of environmental sustainability, proposed by young artists – two of them focusing on the matter of water.

Wateryduo, designed by the students Francesco Bocchini. Alessandra Garavaldi, Francesco La Noce, Yuri Lucini, Matteo Simonetta, Simona Torretta and Luca Orrù, is an interactive sounding installation made up by a double wateryharp, built up of two columns of seven trickles of water, which constitute each a cord. Played by the public’s hands, this instrument produces notes in pentathonic of Solb (Solb – Lab – Sib – Reb – Mib, i.e. the black piano ivories). “These sounds are open, watery and liquid and can create pleasant and heavenly melodies also for music lays”.

Water melt in other drops and short sounds that flow in a container placed at the base of the instrument, where water is collected and recycled through a pumping device which brings it again above to create new sounding water cords.

Wateryduo, thought to be played in couple, talks through the sound of the continuous water cycle. It talks about the way in which water comes to us from the atmosphere and how it can be used, collected, protected and distributed in various ways. 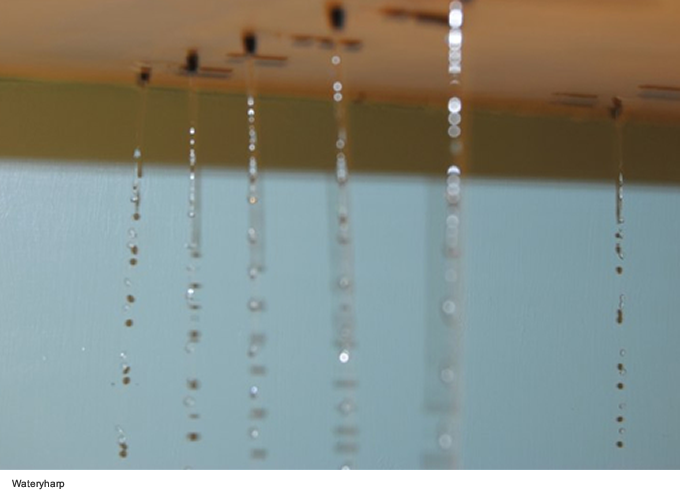 “No other resource is so precious for human beings like water. However no other resource is used in such a wrong way, misused and worst distributed like water”, told the authors in the work concept. “Of course, having water at disposal to drink, as well as maintaining the ecosystem health and unpolluted and having food resources are only some of the topics really put in jeopardy nowadays. The same is true for our water resources, which are more and more stressed.

The framework could seem dreary, but the opportunity to improve are numerous. Many already got some awards for their engagement in water saving; we could also do much to preserve this essential resource, by applying some highly technological approaches but also by acting in a very simple and practical way though everyday strategies aiming at protecting this good”.

Sink Pink, the other installation present at [in_equilibrio] concerning the same topic, is more explicit as regards the denunciation of an uncontrolled consumption of this resource. Created by the students Daniele Becce, Francesco Di Biaso, Marco Monti, Oliviero Piccoli, Martin Rinaldi and Stefano Zanichelli, Sink Pink is a “mirror” tap: each time it is virtually used, it gives back our image more and more dehydrated. The skin of our face, which is recorded by a camera, appears marked by cracks such as the arid ground in the desert, until we close the tap and save some water, interrupting a pouring that we too often make useless flow.

From Milan to Rome I discovered that, through the cultural platform EcoArt Project, the organizers Fortunato Productions and Associazione Culturale Art For Promotion, in cooperation with the main sponsor (right in these days in the sights of privatization) Gruppo Acea, the main national operator in the water sector, are promoting the contest Pure Water Vision – Acea EcoArt Contest 2010. The artists are asked to express themselves on the relationship between water, human beings and environment and its connections to the sustainable development of our planet.

The contest’s focus was also to underline some less known aspects of water cycle, to trigger off “a consideration about what is hidden behind the apparent simplicity of the element water, about what happens before and after the distribution of this precious resource which flows out from our house tap, through a travel among springs, waterworks, sewers and purification plants”. 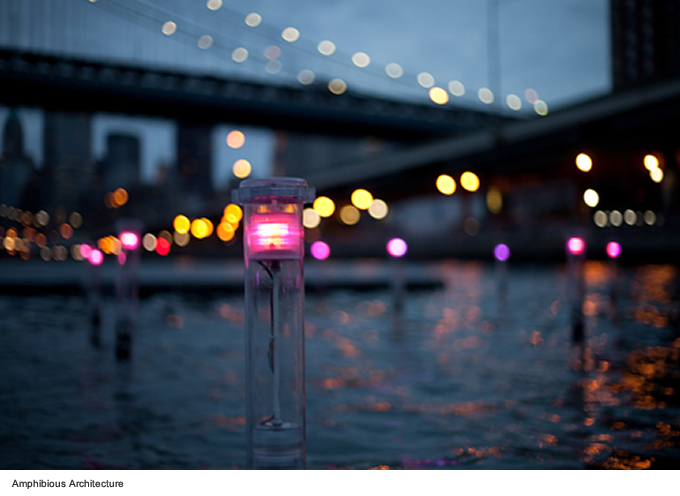 Last but not least an international look towards New York, where an artistic and environmental project as Amphibious Architecture tells something about the way in which artists and the public can be involved in a very interesting multimedia interactive installation platform.

Amphibious Architecture – designed by the Environmental Health Clinic of the New York University and by the Living Architecture Lab of the Columbia Graduate School of Architecture, Planning and Preservation, ordered in 2009 for the exhibition Toward the Sentient City at the Architectural League of New York – is a floating installation situated in the waters of New York, an interface between life over- and underwater.

Interactive floating pipes, installed in the East River and in the Bronx River, host a series of underwater sensors and a row of luminous signs above the water level. The sensors continuously monitor the water quality as well as the presence of fish and the interest of people towards the river ecosystem. The lights react to the sensors and create a sort of dialogue between people, fish and their shared environment.

Thanks to SMS, citizens can send text messages to fishes and receive live information about the river status and therefore contribute to create a common interest about the environment. Amphibious Architecture’s approach is totally different from the “do not disturb” one, since this project boosts people’s curiosity and involvement. 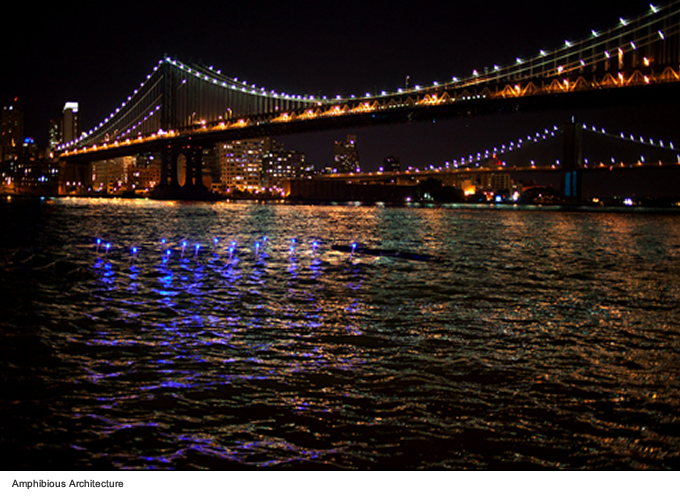 The creators underline the interactive and communicative value of this installation by saying: “Instead of treating water like a reflecting surface which reflect ourselves and our architecture, the project creates a double interface between land and water landscapes. In these two different suburbs of New York in which the installation is hosted, it creates a dynamic and charming luminous layer on the rivers’ surface. It makes the invisible visible, by mapping a new ecology made of persons, see life, buildings and public space and by spreading the public interest and encouraging discussion”.