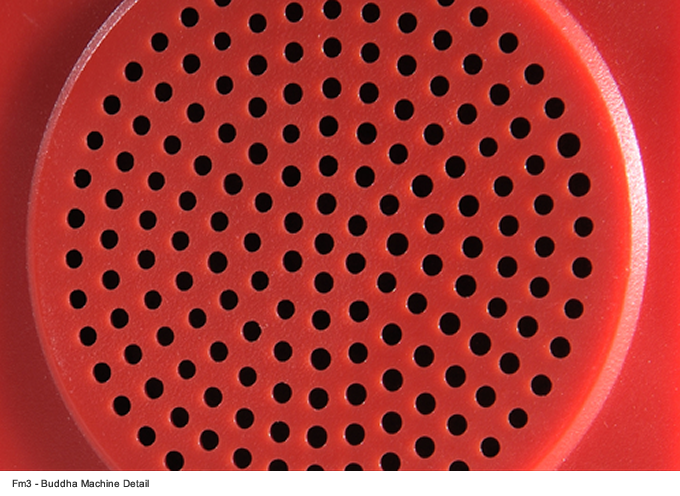 Prior to releasing the object for which they are best known, the plastic loop-playing device known as the Buddha Machine, they worked on a series of fascinating albums that range from the anthropological pop compilations of Virant’s Radio Pyongyang (2005) and documentary field recordings of Zhang’s Streets of Lhasa (2005) to compilations with heavy-hitters of the Chinese music world like Dou Wei and Yan Jun.

Since 2006, however, much of their work has been related to the Buddha Machine, which builds on inspiration from the automatic mantra- and prayer-chanting recording devices common in Asian temples, replacing these original loops with the composed elements with which the group has continuously worked. The Buddha Machine has passed through two generations so far, in addition to a collaborative special edition authored by Throbbing Gristle and an iPhone application, not to mention upcoming iterations.

The Buddha Machine also changed the sense of live performance for FM3, giving way to an activity they refer to as Buddha Boxing in which Zhang and Virant sit on stage with an arsenal of Buddha Machines, taking turns adjusting and relocating them in order to produce new and fascinating harmonies.

The device has become a cult new media toy in some parts of the world, but recently has seen a resurgence of interest on a more profound level. During a quiet period in between releases for FM3, I approached Zhang Jian to describe the evolution of the Buddha Machine so far, hoping for some insight into upcoming changes in the group’s work. The following interview was carried out in Beijing and Hong Kong during 25 June. 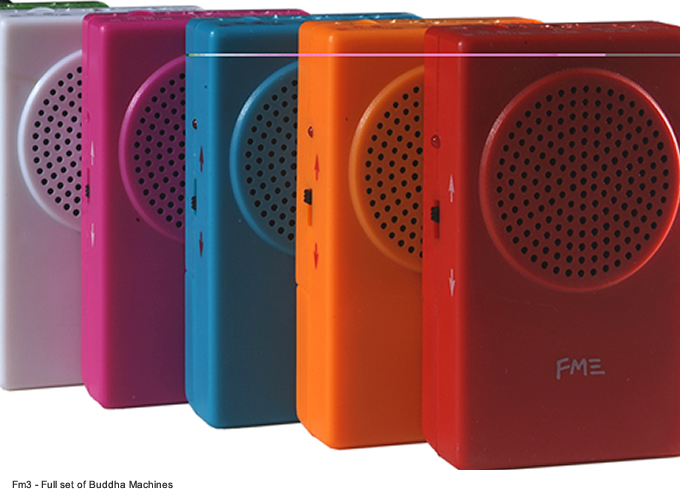 Zhang Jian: The Buddha Machine exerted a huge influence on FM3. You could even say that it is the core spirit of the group, since even today none of our work has surpassed it. On the other hand, the commercial success of the Buddha Machine was unforeseen, but because of this, FM3 can continue to survive as an experimental band for another ten years or more; that counts as a miracle. For this reason, we are extremely proud, and, for this same reason, we will continue the miracle of FM3.

Buddha Boxing could be called the specialty performance style of the Buddha Machine, and it is also one of the works with which we are most satisfied. Although we’ve already performed it some hundred times, continuing will require further rehearsal and on-site control. As you know, it’s not a standard performance, not like a rock band playing a few songs that could be repeated over and over again. The downside of Buddha Boxing is that it is not suitable to be repeated in the same venue for a similar audience.

As a musician, emotion is more important than technique… I still have a large amount of feeling to add to this machine. 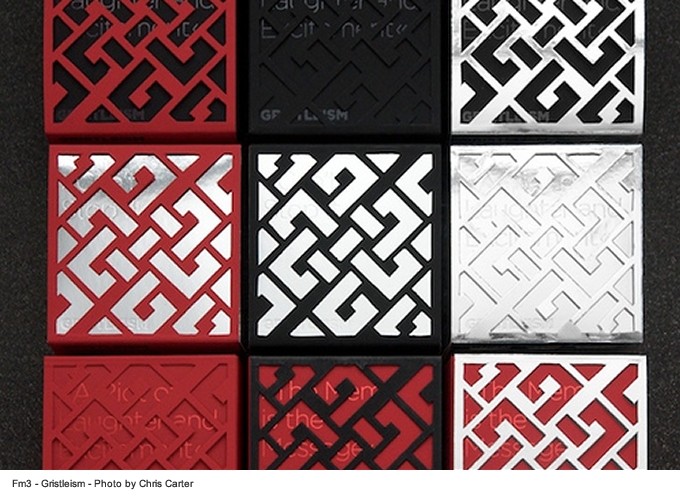 Robin Peckham: Let’s talk also about Gristleism project: was it successful? Obviously it didn’t have nearly as much of an impact within China as the original Buddha Machine. Can you explain what the differences might be, and discuss how the two projects are related?

Zhang Jian: Gristleism is a cooperative project initiated by Christiaan Virant in the United Kingdom, and it was primarily his work. It was not distributed within China, so the fact that it didn’t receive a great amount of attention makes sense on some level. This was largely a trial run, and we will continue to maintain this attitude that the Buddha Machine is made for its own purposes rather than for other music or other musicians, but in order to preserve an open set of unlimited possibilities, we will also develop a series of special related projects. Gristleism (which I translate phonetically as geweisuo zhuyi, or the “song of the wretched thing-ism”) is a new topic chosen by Christiaan, related to the development and history of modern music

Robin Peckham: One reason the Buddha Machine felt so intuitively interesting back in 2005 was because that was the heyday of the iPod; this plastic, looping box just felt so justifiable opposed to that gadget mindset. How has this changed in the past five years? Does the Buddha Machine function more independently now? What do you think of the iPad?

Zhang Jian:An unexpected instance of beauty developed into an intended beauty–this is not easy. FM3 has always been very independent, so much so that for a while no one in China even asked about it. I had to spend two years just to develop some ten points of sale–the situation was not ideal–and even the best store only sold around ten units annually, plus most of the buyers were foreign. The Buddha Machine still belongs to a rather illusive state of existence, but I am willing to make the assertion: our Buddha Machine will have a longer lifespan than most music. About the iPad, I like it, but I haven’t bought one yet. We are currently researching and developing Buddha Boxing software specifically for the iPad, a simple application that would let a single user simultaneously control six units in their own Buddha Boxing match… 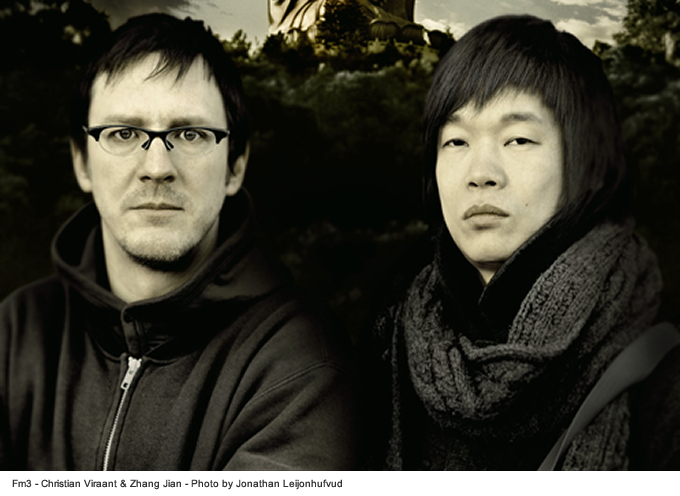 Robin Peckham: How would you describe the relationship between your Buddha Machine and the “real” buddha machines given out at temples? Can you explain your leanings towards Buddhism?

Zhang Jian: The traditional buddha box is a prototype, a small household appliance or automatic recording device; there is no art to it, and the producers improved upon the requirements of scripture only superficially. The FM3 Buddha Machine is both music and low-technology art, its energy far exceeding that of ordinary scripture. Almost all of its tracks, even at this short length, require three to four months of quality control even after completion. The loops seem simple, but the affect and attention therein goes far beyond random excerpts… When it comes to Buddhism I’m a layman, but it seems that the Buddha has always been at my side… for this reason I will be personally funding the production of a standard buddha machine: “Mantra of Manjusri,” for which I will select all of the scriptures. There is no time limit on production–it will be finished when the time comes–restoring a standard buddha machine for use in the temple…

Robin Peckham: For me, one of the most exciting things about the Buddha Machine was its “objecthood,” especially juxtaposed with the spiritual context and aural immateriality. How do you understand it: as an object, a series of compositions, a sonic experience, or what?

Zhang Jian: I basically agree with your analysis, but I think what you refer to as its “objecthood” could be better described as its utility. People grow flowers, keep dogs, and raise children, and I recommend the use of the Buddha Machine in the raising of a house. Occasionally its low-technology produces indeterminateness in the audio frequency, and as long as you find the resonance of auditory perception this simple music will produce energy. As soon as this kind of energy appears between ear and mind, in this space, you become the host… 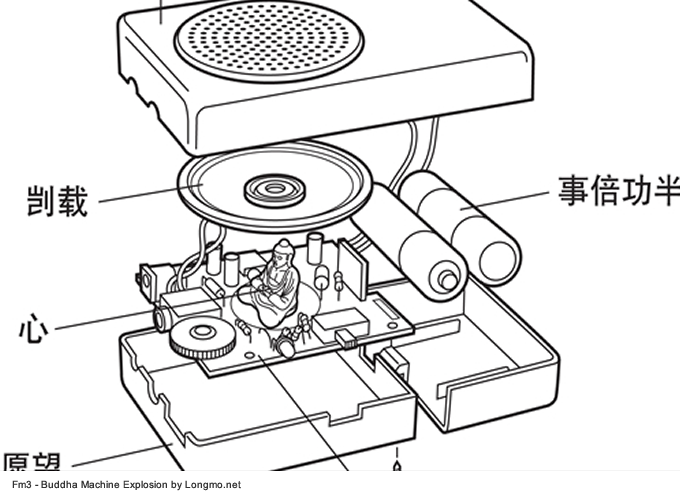 Zhang Jian: We are currently preparing the third generation of the Buddha Machine, scheduled to be released before the end of the year, continuing pure FM3… At the same time, we also have a set of special projects. I am currently working with performer Wu Na on a [seven-stringed instrument] guqin-themed version of the Buddha Machine. This is an original pure music machine that takes the guqin as its theme, which could be called the sound of nature, an ecological music with no additives. Primarily targeting the idealized space of Chinese classical culture and those with some perception of this kind of space, I hope that the work will be able to meet with approval within China. That will be released towards the end of fall this year.

Robin Peckham: How do you and Christiaan work together these days, especially with him in Europe much of the time? How often do you perform together, and how much do you work on new things? How do you see FM3 evolving over the next five years?

Zhang Jian:This year we have performed very little, and the division of labor has become more clear in the ongoing carrying out of these new projects. We have many plans for the future, and are moving ahead slowly.

Robin Peckham: What do you think of the experimental music scene in Beijing in general, and how have you seen it change over the past few years?

Zhang Jian: Compared with ten years ago there has been vigorous development: the quality of audiences has been raised significantly, and the idea of experimental music as a form has become established within the city. Nevertheless, it remains a small group of people. 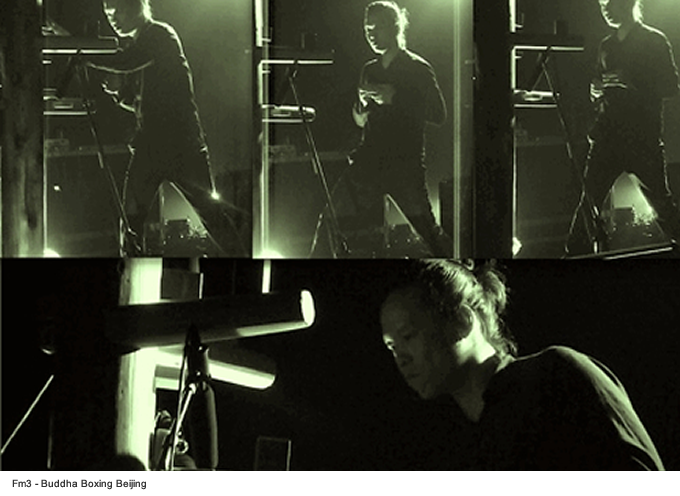 Robin Peckham: We are beginning to notice a generation of young musicians and sound artists influenced by FM3 and especially the Buddha Machine ethic. How do you see these new artists?

Zhang Jian: If we can help some young musicians, that is our good fortune. On the other hand, we too are still young…

Robin Peckham: In terms of FM3 and the Buddha Machine, what kinds of misconceptions still exist for your audience? Is there anything you would like to explain about the project that has been widely misunderstood?