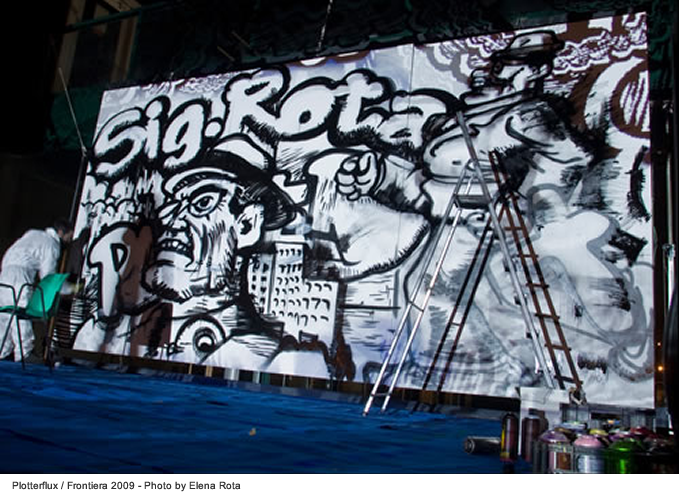 At first there was the bomb, the bomb was the writing. But then light came. Nothing easier than creating a word play when the subjects of this operation are: the writing and a writer named Verbo (literally: the Word) (aka Mitja Bombardieri).

During the first years every writer puts himself through a long training that, necessarily in the street, goes through the assimilation of basic concepts such as speed, precision and style. Generating a personal style is the condition sine qua non, not only for recognizability needs, but specially for the chance to express ones imagination, which often originates from an heterogeneous amalgam (mass media, comics, traditions…)

Verbo, once the initial training is over, runs a pictorial research focused on the writing, on its basic features and on the style innovation elements developed over time. Its alphabet is influenced by metallic reflexes of robots that populate the manga and anime universe, its letters are shielded by an inviolable chromatic-chiaroscurale armour.

The contamination with the videographic and digital culture is mostly experiential, biographical we might say. Even though, the vjing, live media’s background soon becomes a part of Verbo’s curriculum. This may also be a reason for the idea of combining the technical-practical knowledge acquired during the video post-production with graffiti. 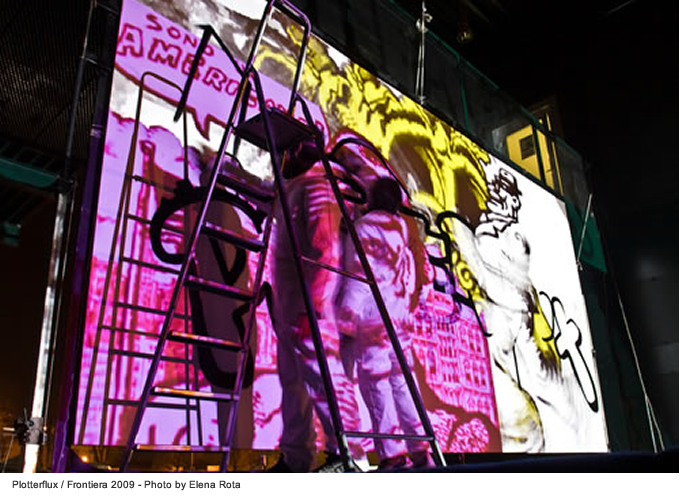 His project Plotterflux can be defined as a concrete realization of the medial drift of writing. Born from the contamination from the “other” visual languages – photographic, cinematographic, audiovisual in general – this performance allows to the Bergamasterz (Verbo, Font, Hemo, Loathin, Alfa) crew to perform in a live media which unites on the same surface the color’s materiality with the projection’s immateriality. As to the contents the password is free style: free associations of ideas, indiscriminate superimposition of concepts, sudden linguistic accelerations and sharp syntactic brakings.

The Video Incursioni (literally: Video Raids), that bring the project Plotterflux to freely express its luminous tags in public spaces, represent the sum total of a journey which began in the street and cannot end elsewhere. The usage of light in place of color (projectors in place of bombs), allows to appear and disappear even faster leaving no evidence, on the walls at least.

Also exploiting the usage of an hybrid technology such as the mapping, ideal for architectural façades and sculptural presences, that, starting from scanning of the physic elements, composes dynamic narrations which are able to activate the surfaces touched by the projections. 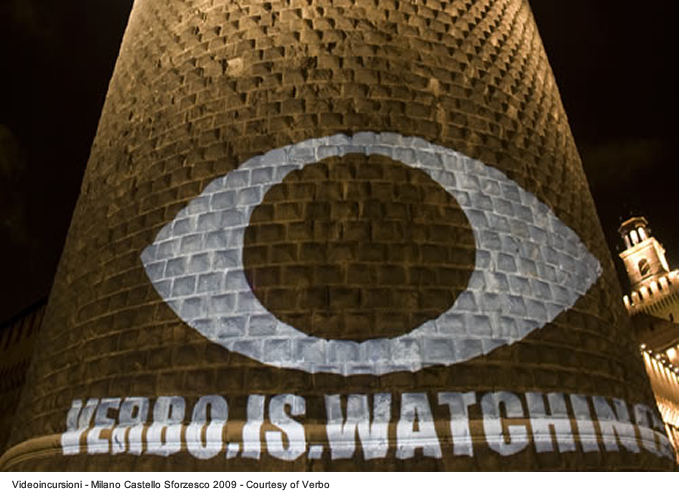 Claudio Musso: The writing has brought a “wave of freshness” in the artistic view in which it was born and in which it grew up. Experiences of combinations of technology and manual skill, such as Plotterflux, in which directions do they lead?

Verbo: Plotterflux is an experimental synesthetic performance originated from years of technical experiences in expressive fields such as liveset audio/video and pure writing. The journey of the light tells, and the writer’s shadow marks and underlines the pictorial resultant. This performance is possible, on one hand, thanks to the writer’s quick technical gesture , on the other hand thanks to the FLxER, software for the live video which I’ve been developing for years together with Gianluca Del Gobbo and the FLxER team, this software allows a very easy layout for video elements.

So Plotterflux wants to exploit the pictorial skill, the mark of the writing applied to a limited temporal space which often happens when the writer operates illegally, exploiting, this way, the performative skill of the writer who, by its own nature, is forced to the action painting. After all it has been a good way to express other ideas outside of the narrow field of writing, thanks specially to the mutable and “gaseous” video element.

Claudio Musso: In your pictorial path, the stylistic evolution has brought you to absorb imaginations, such as the ones of anime, and to deconstruct explosively the graphic element of a single letter. In both cases an influence from the cinematographic culture is clear and also the research of a cinematic dynamism.

Verbo: Aside from reckoning that the visual food on which each of us has grown up is very important, which strongly influences mi pictorial output, also the sign researches of my letters also belong to an evolutive scheme typical of writing, bonded to the “dynamism of letters”, to “Loops” and to “Armours”. Playing with these three ways of making writing I decided to transform these ways in true biomechanical armours, that protect the soul of the letter which is inside, by celebrating the “battle of letters” fiction in the myth of the writer’s exploit…just like a hero of any manga…. 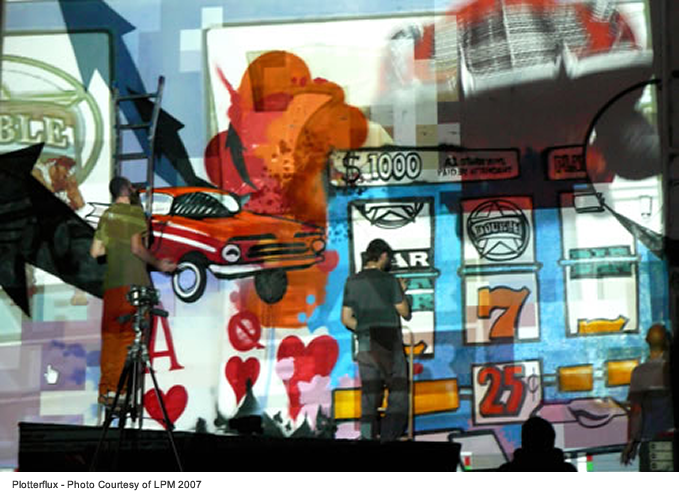 Claudio Musso: I reckon that the Videoincursioni deserve a proper space. In this case, aside of some elements precious to street art, we find that light (of the projector) substitutes color (of the bomb), but that’s not all…

Verbo: Videoincursioni first of all represent my need of going back to the street after a long time spent in the spaces of electronics and visuals. Going back to the invasive gratifications of the writer, though using the potentiality of a video light beam in the city. Appear and disappear, and therefore seducing: come to produce concepts dedicated to the context in places hardly accessible to painting for instance, like when I projected on the Pirelli skyscraper and on the Castello Sforzesco in Milan or on the Coliseum in Rome…

Claudio Musso: The video mapping, whether you apply it to architecture, to installation or to objects, it has the ability of animate static surfaces, providing them with a chromatic and dynamic changeability. What exactly goes on in this kind of operations?

Verbo:Mapping is a video technique suited for architecture and we are using it a lot in different jobs, also commercial ones with the Project.On.it group. Lately I am testing it on my installations, on my pieces to play a bit with the lights, shadows and colours in a dynamic and interactive way, always in a “scenical” perspective in this movie that I am “shooting” about writing.

Claudio Musso:One last curiosity: I know that you have been working on a “corporate graffiti” project, using inexorable axioms of the discipline (choice of a name, study of a tag, development of a personal style…) in a bank. How did that go? And what did you learn from this experience?

Verbo: Lately I am working on mark and contrast other than the medium, and thus this work was great. The bank wanted a street art work done and to make it I got directly in touch with 60 managers who offered themselves as mediums, eseguendo una mia idea performativa inserita nei loro programmi di incentive. I subtitled it “corporate graffiti” since I worked mostly on the identity, disguising them all and homologating them, so being anonymous they were able to freely express themselves about their social conventions, it worked so well that, armed with markers, rollers and brushes, they literally devastated 7 floors of stairs in the bank. 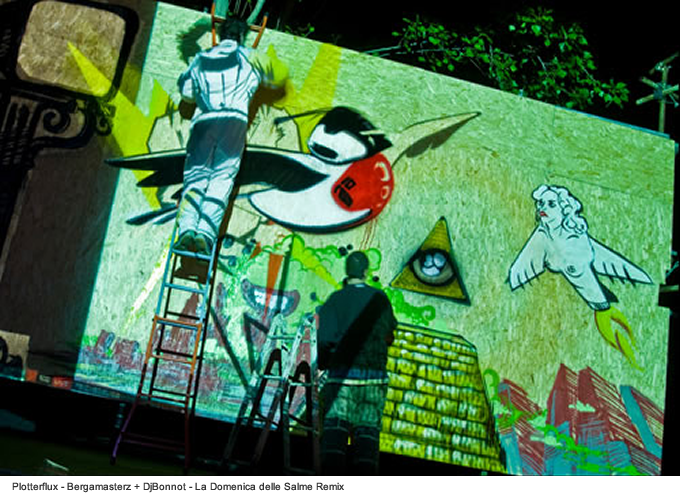 The chaos that came to be was then the perfect support that was needed to contrast with my pictorial mark and the lettering that I painted (my whole alphabet). This experience has been useful, for everyone who was involved in it, to understand the value of identity and the strength that originates from contrast, from confrontation and therefore from dialog, right inside a structure which, by its own nature, tents to homologate people.

Thus the whole work is in sharp contrast with the bank’s interiors, offices and austere spaces, where I wanted to recreate the vitality typical of the street, where thousands marks narrate its life, where every day order and disorder dance together as they are absolutely necessary elements.