The Imal Centre. Culture & Techno In The Heart Of Europe 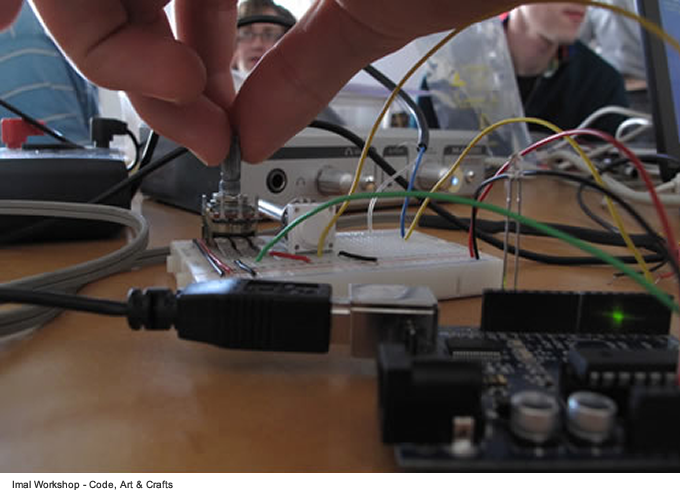 IMAL is an association created in 1999. From 2007 IMAL (Interactive Media Art Laboratory) has inaugurated its centre for digital and technological culture; a space that reaches 600 mq situated in what used to be an industrial shed in the heart of Brussels, becoming a place of encounter between artistic, scientific and industrial experimentation. A space, dedicated to research, digital culture and new media.

IMAL is fundamentally a laboratory for research, experimentation and production for artists, a center of formation which organized workshops and internships; a space for exhibitions, concerts, performances and conferences all under the same denominator of interdisciplinary and interaction between audience, artist and researcher.

Right during this period, from the 4th of June to August 20th, PLAYLIST: playing games, music, art, an exhibition about the reinvention of objects and digital obsolete media, is running. The event presents artists work from the scene of “chiptune” and from digital arts, that have conquered old PC’s and consoles in order to extract new contexts both visual and audio. (http://www.imal.org/playlist)

I personally met with the director of IMAL, Yves Bernard and his collaborator Marie-Laure Delaby for pleasant chat about the history and the activities, in the center that they manage, let alone about the panorama of digital art today and about the production and diffusion in Brussels and in Europe. 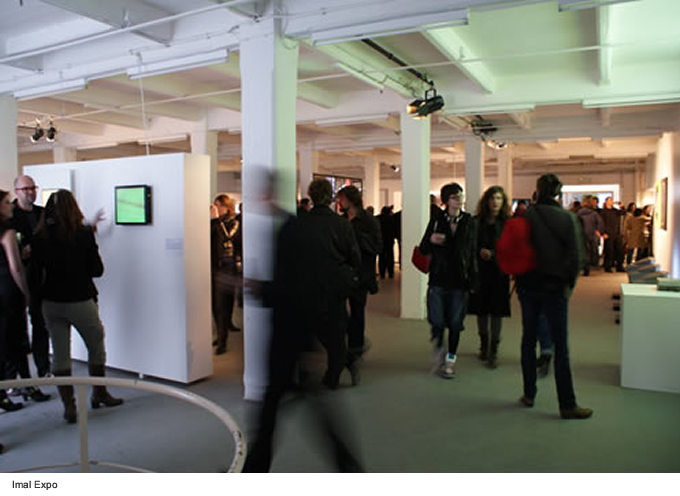 Silvia Bertolotti: How was the idea of a center dedicated to digital arts as IMAL born and what was your personal story?

Yves Bernard:The association was founded 10 years ago. Originating from the field of research, the idea was to create a kind of laboratory for artists working on new technologies and new media. In the 90s we therefore created a media lab for national and international artists, but it was in 2000 that it held its first major project involving Finland, France and Belgium at the Brussels Expo. Since 2007 we have had a stable base here, an area of 600 square meters which has helped to consolidate the identity dell’IMAL and build a more stable relationship with the public. The idea is still the same, namely that of a center that is both a laboratory and production site, which also hosts workshops and events for the public.

Silvia Bertolotti: What is your vision, as privileged observer, of the current situation of the digital arts in Belgium and Europe in general?

Yves Bernard: In Europe you only find always and only either workshops or exhibitions. It is difficult and rare to find these two events combined. On the contrary, this would be a winning combination, and that is what we want to do at IMAL. At a European level, there are institutions and art centers in Spain (Laboral, Hangar), France (GMEA, Cie Incidents Mémorables, Art Sensitif), Finland (m-cult), Holland (V2 Mediamatic) and Germany with whom we also collaborate with. In Belgium, for the most part we have workshops. We must also consider in this sense that Brussels has a strategic position within Europe, and a kind of privileged place that allows the meeting and therefore the dialogue between artists, designers and the public. And this is surely an advantage which our centre takes into account and is trying to develop.

Silvia Bertolotti: Which partners are more open to the emergence of digital arts: institutions, companies or research centers? Who mainly collaborates??

Yves Bernard: We are currently setting up partnerships with the most varied institutions: from European art centers, to university research centers (particularly French and Belgian), small firms in the technology sector, which are also strongly encouraged by the dialogue with artists and creative sector workers 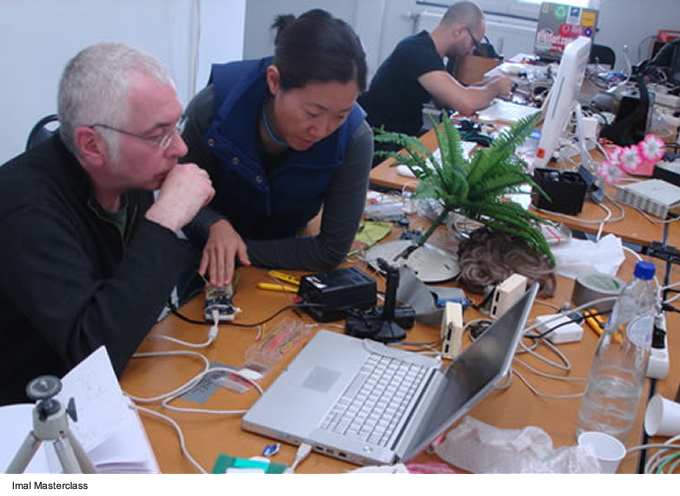 Silvia Bertolotti: What position do you give to research and science / technology? In general what is the role of research in the field of digital arts at the moment? I saw that in your program have space, in fact, thematic meetings on the relationship between art and science.

Yves Bernard: Technology is certainly integral to our era and our daily lives. However, it must be discovered and meet the needs of socio-cultural experimentation. This requires a dialogue and exchange with the artistic and creative practices. It is in this sense that we try to act as a center: allowing the two spheres to meet, start up a dialogue and enrich each other. We believe in giving the utmost importance to technological innovation and research a social and cultural dimension. In this sense IMAL seeks to represent a point of contact between art and science.

Silvia Bertolotti: What is at present, if there is one, the winning formula for the centers of digital art: workshops, festivals or performances? In what direction do you work?

Yves Bernard: I do not think there is a winning formula, but surely there is a successful combination, as the history and current situation of IMAL demonstrates: that is the union with exhibiting and the laboratory. This essentially translates as the combination of promotion and dissemination together with testing and production. But above all I think is important to always work at all levels, covering all bases. Testing, producing and educating are directions that must cross-over at any time. And it is this cross-over, in fact, that enables the discovery of new ideas and itis always at different levels: that is for the different artistic languages as well as the artists themselves, as well as the creative possibilities that are in place to generate such “emergencies” . 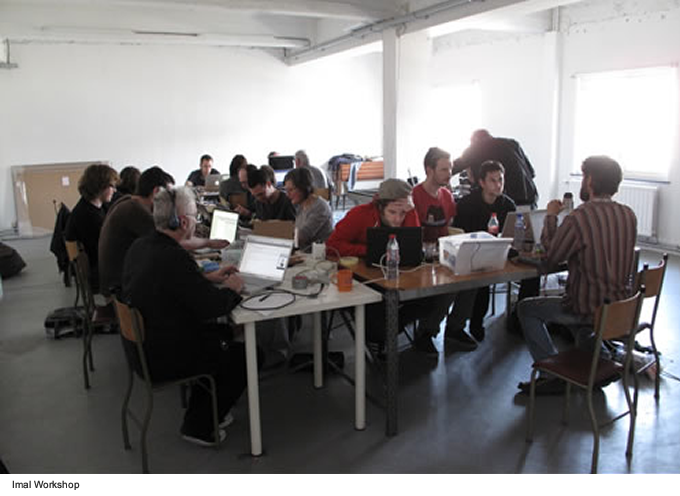 Silvia Bertolotti: What is the role of the interaction-participation with the public? What are your plans to go in this direction?

Yves Bernard: The ateliers allow the involvement of the public. Indeed, we have always had great success during the workshops organized. They involve not only artists, but “creative people” at large. But everyone has the opportunity of performing live and to meet in person, physically and face to face. This is a dimension that artists often complain about, and unfortunately it is true that interaction is lost today, and this goes hand in hand with the development of technology. But we still emphasise the importance of direct exchange and encounter between people, not just in society but also in artistic terms so often that in fact we discover new ‘vocations’ by people who are confronted with different languages and artists.

Silvia Bertolotti: What is the target and the type of artists you work with?

Yves Bernard: As art center we favour the spread of information, we presented international artists like Jodi, Maurice Chevalier, or collectives such as the “Holy Fire” group that saw the presence of international names. We prefer to organize exhibitions based on collectives rather than individual artists, such as the current “Playlist”. As for the laboratories we focus instead mainly on the discovery of unknown artists who can produce their works through us.

Silvia Bertolotti: Is it more difficult for a centre such as yours to promote the ‘production’ of work or the ‘spread’ of artistry?

Yves Bernard: Both are two key words in general, but especially for the IMAL. We focus on both of them equally. The production, when we give the opportunity for artists to work on their projects, is without doubt the easiest and more direct part. The spread however, being an activity more diluted over time and therefore longer and more challenging, is certainly the most difficult. 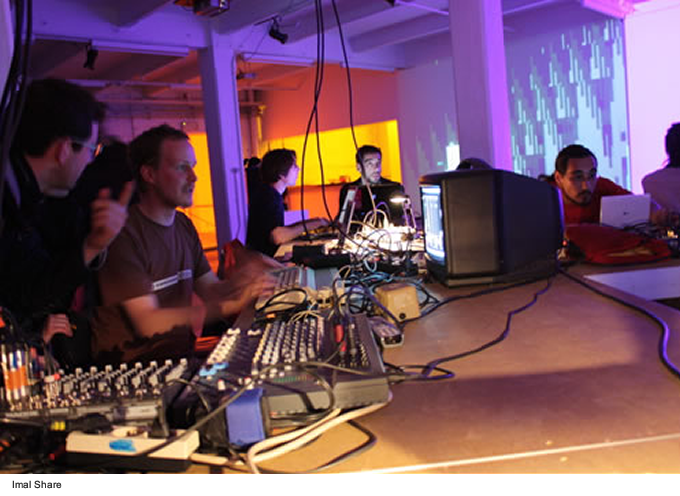 Silvia Bertolotti: What are your future plans for IMAL and what new projects are you beginning?

Yves Bernard: We are concentrating principally on these main projects:

– the construction of an Audiovisual Library, that aims to preserve digital art works. We have already taken a first step in creating an archive on our youtube channel (http://www.youtube.com/user/imagicy). But the idea is to construct a real ‘mediateca’ in physical and virtual terms, which responds to the fear of disintegration and disappearance of digital work, to ensure durability instead.

– The creation of a Media Lab, which is a sort of artist residency for national and international artists. This also because Brussels is becoming the place where European and non-European artists are deciding to settle. So we would intervene in the creation of a meeting place where a dialogue can be started between the arts and their creators.