Lookat Festival. Between Interactivity And Contemplation 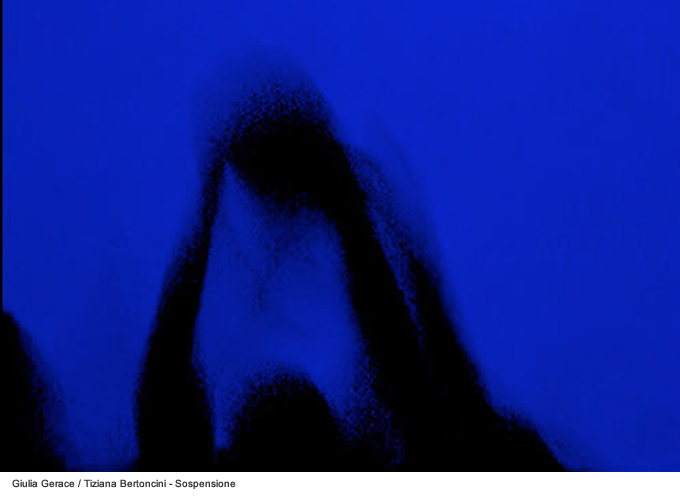 It is more and more evident that contemporary culture and art are able to communicate to a public which goes beyond the simple niche of professionals. It is also difficult to ignore the fact that the new media offer a great contribution to this phenomenon. Lastly, it is a matter of fact that the vernissages of exhibitions, events and theme festivals are more and more crowded. However, when this happens in small towns, often accused to be unable to satisfy the requests and practices of electronic and digital art, it means that the “long queue” has already created a positive effect which is impossible to ignore.

LookAt Festival has reached this year its fourth edition. It is an event dedicated to video art and electronic music, hosted this year in the charming rooms of Fondazione Ragghianti in Lucca. Cured by Elena Marcheschi and artistically directed by Fabio Bertini, the just concluded edition titled ImmaginAzioni (ImmaginActions) was organized as an exhibition opened to visitors’ choice aiming at exploring the double soul of new media: the contemplative one and the interactive one. Moreover, it hosted the visions and experiments of well known artists, whose poetics includes different media while building up powerful and involving scenarios.

Presented on a shared and open-to-dialogue level, the two dimensions – the one of gestures and the one of look – offered the visitors/actors an “ecologic” view, aiming at restore above all the contemporary value of contemplative act, sometimes with the risk of extinction in front of an appeal that the simulated and shared immersion in digital technologies is able to offer. 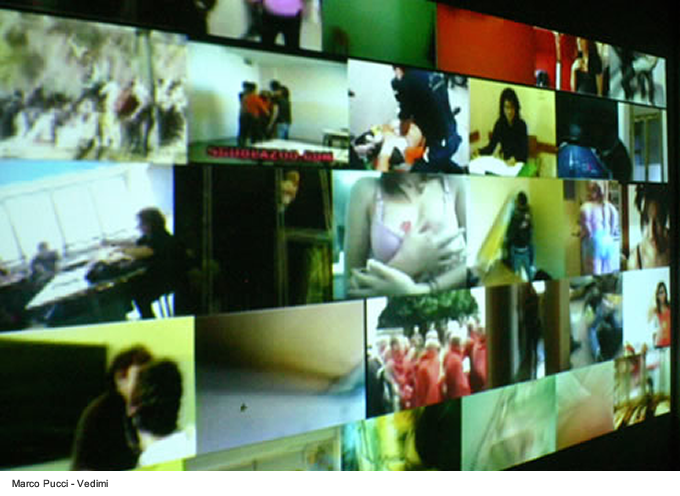 Divided into nine video installation distributed in two areas – Immagin / Action – the rooms of the Fondazione Ragghianti have been invaded by an heterogeneous public of young and elderly people, professionals and mere curious people during the opening day on 15 May.

If assisting to the performances of the well known video artist Giacomo Verde seemed to be a privilege for some very punctual people (included me. I came only 3 minute later and conquered my place by elegantly elbowing among an unexpected crowd), the queue to take part to interactive installations forced the organization to postpone of an hour the exhibition closing time. Can we still say that the contemporary culture is an auto referential game without a public? Can we still justify the fact that it is often ignored or relegated in the last pages of the public agenda?

We talked about these themes and the cultural line of the festival with the curator, Elena Marcheschi.

Giulia Simi: LookAt Festival has already reached its fourth edition. For the fist time it has been hosted in the prestigious rooms of Fondazione Ragghianti in Lucca and for the second time you have been the curator. Could you tell us something about the birth and development of this project, above all in relationship with the territory where it takes place?

Elena Marcheschi: LookAt Festival was created in 2007 from an idea of Fabio Bertini, who worked at the outfitting of the exhibition Arte del Video. Viaggio dell’uomo immobile, organized in 2004 at the Fondazione Ragghianti and cured by Vittorio Fagone. He then thought of fulfilling the project of an annual festival dedicated exclusively to video installations.

After having seen the works of art of some artists such as Bill Viola, Studio Azzurro, Fabrizio Plessi and many others, and after having understood the difficulties for contemporary art to emerge in Lucca – a city which is more and more addressed to the promotion of other forms of art – the initial idea was to give space and visibility to video installations created by local artists by showing them in an exhibition organized in the former tobacco factory (Manifattura Tabacchi), a “container” abandoned for many years but where the energies and dynamism of the past still resound. 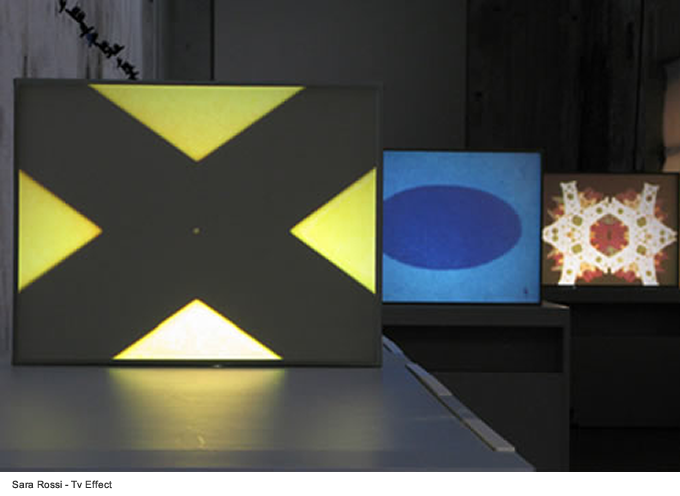 The foundation of LookAt Festival is therefore strictly linked to the territory of Lucca, but during time its horizon has widened.

In 2008, the second edition featured a selection of young artists and a “delegation” of Spanish artists for a total of 13 video installations. From this edition the festival has acquired the “videoart and music” form and, besides video installations, the organization began to promote events linked to the most advanced forms of electronic music and was able to involve different kinds of public within the rooms of Manifattura.

In 2009 Fabio Bertini contacted me to appoint me as curator of the exhibition. In this way Luci(di) corpi was founded, an exhibition where we showed 8 video installations created by eight Italian artists, who were no more chosen from the Lucca area, but who were active at national and international level. The exhibition theme was the body and it took place again in the former tobacco factory, altough in a different area than the former editions. It also had a great response from the public and an excellent feedback by professionals.

ImmaginAzioni, the art exhibition that I have cured this year, is exhibited for the first time within LookAt Festival in the exhibition rooms of Fondazione Ragghianti. This was a great opportunity for us and at the same time it was an honour that we understood as appreciation of our job by an institution that in the past years supported this initiative. And actually we feel that this step represents a kind of “circle closure” as the inspiration for the festival came exactly from this same place. 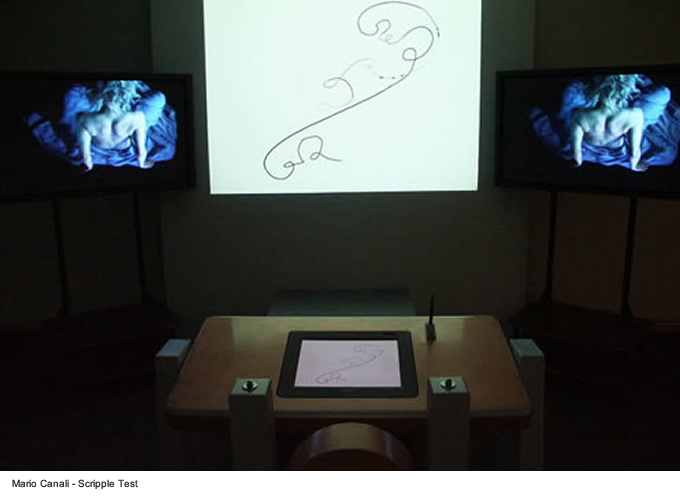 Giulia Simi: The title of this edition is ImmaginAzioni, i.e. ho video installations are able to create contemplative and/or interactive scenarios. In the exhibition, the showing spaces give back this alternative by offering the public the opportunity to choose which path to follow as first: Immagina / Azioni. What is the reason for this choice? Do you think there is in some way the need and maybe the urgency to recover and re-codify the contemplative dimension linked to electronic and digital art which is more and more identified with interactivity?

Elena Marcheschi: The choice of the title and therefore of the double path Immagina / Azioni comes from the need to propose a showcase able to understand the complexity of the nowadays scenario of artistic audio visual electronic research by reflecting on the one side the trend towards a creative experimentation that uses modern technologies (see video-mobile phones in Marco Pucci’s installation, the virtual reality in the interactive environment of DN@) and on the other side by reconfirming maybe the oldest and most contemplative dimension of video installations which is linked to more traditional artistic forms such as painting, sculpture, photography, etc.

The idea is therefore to guide the public through paths and suggestions that stimulate all senses and, in some ways, make people live again the old spectator experience enriching it through transformations and innovations of contemporary art. So the two paths are complementary and necessary in order to track an indicative map of two different ways of understanding the expressive potential of electronic audio visuals means.

Giulia Simi: The artists selected for this festival edition are nine: Mario Canali, Dn@, Theo Eshetu, Giulia Gerace and Tiziana Bertoncini, Marcantonio Lunardi, Lorenzo Pizzanelli and Fariba Ferdosi, Marco Pucci, Sara Rossi, Giacomo Verde. It is a selection that links well known characters, famous also at International level, and other younger artists. This selection is therefore able to offer absolute interesting points of view. Could you explain us your choices?

Elena Marcheschi: I like thinking of ImmaginAzioni as a crossing point of experiences, where the most modern technologies meet the traditional ones and difference experiences and visions by ancient and “contemporary” artists are proposed in the same space and lastly where famous and appreciated artists “open the doors” to younger experimenters. I like the idea of mixing and coexistence of ways, the rupture of hierarchies rather than a pyramidal concept of art. Keeping this in mind, we worked in order to make the Festival evolve and “mature” during the time. It was born as showcase for young artists but for this edition I wanted to make a step forward.

Taking into account also the value of an exhibition area such as the Fondazione Ragghianti’s one, the most obvious choice was to create a meeting point between consolidated artistic professionals and other “developing” characters, through a curator’s point of view and focusing on the creation of a general qualitative and contentual harmony between the exhibited works of art. 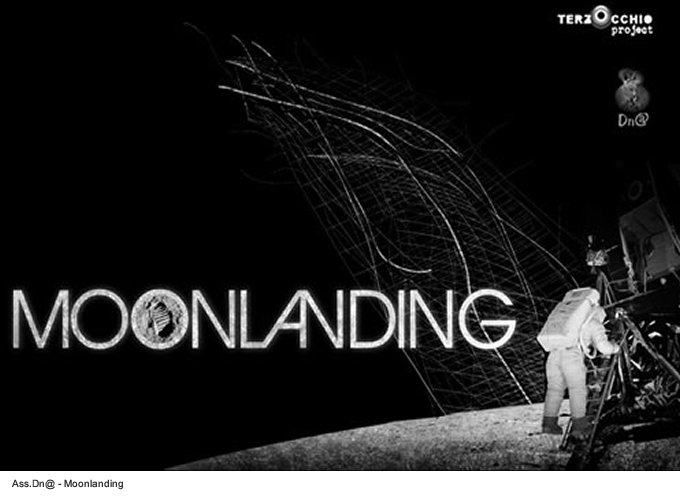 Giulia Simi: A last question is necessary as regards the situation of contemporary art in Italy. In the introduction text to the exhibition, Fabio Bertini, festival creator and director expresses an idea of evident denunciation towards public institutions that year by year find it harder to recognize the strategic importance of supporting contemporary culture. This obliges people responsible of cultural matters at different levels, above all as regards electronic and digital media, to do a voluntary job trying to resist against a wider project.

However LookAt Festival is able to attract a huge public which isn’t élitist at all, by promoting dialogue also with general public and not only with experts. What do you think about this situation and what could be in your opinion the “key” to come out this immobilism that penalizes not only the contemporary art sector but also the entire culture in our country?

Elena Marcheschi: Fabio Bertini’s denunciation against public institutions, which are less and less interested in economically supporting this kind of initiatives is true. It is a tragically real situation which goes from micro to mactro level and affects not only the bigger but also the smaller Italian centers.

This year LookAt Festival was lucky because it had the economic support of Lucca Province and the Fondazione Ragghianti. The town council instead cancelled all funds that could have been used to increase the budget of a quite expensive initiative. To cut it short, the economic resources we will have at our disposal amount to one fourth of what we would need not only to cover the production and exhibition expenses, but also to promote a better and more organized and responsible management of the many necessary interventions. 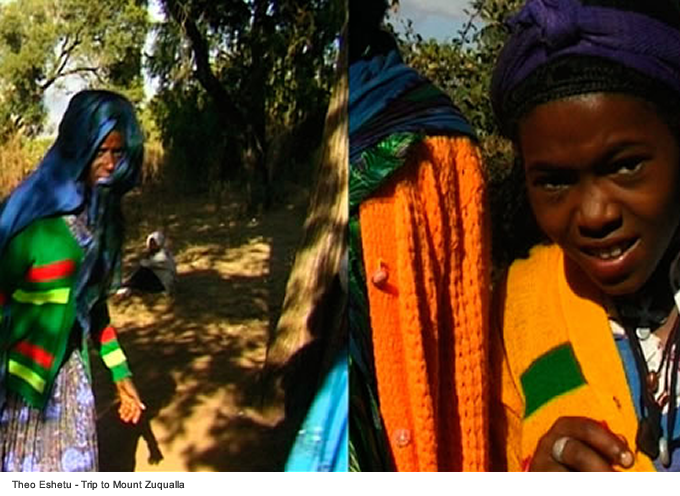 I don’t think the situation will improve, until the institutions don’t realize the impact that these events have on the territory (at the Festival inaugural day, on Saturday 15 May, there were more than 400 persons, whereas on Sunday we registered 180 visitors) and that the contemporary art can be an important resource to invest on, able to promote a “revival” in terms of interested people and qualified visitors. I don’t know what is the right solution for this situation, but I’m sure that until institutions such as Tuscany Region continue to allocate the whole budget for culture to few events, that not always grant an effective quality in terms of works of art and exhibitions, the survival of other cultural events – although appreciated and well known among a wide public of experts and common people – will be seriously brought into question.