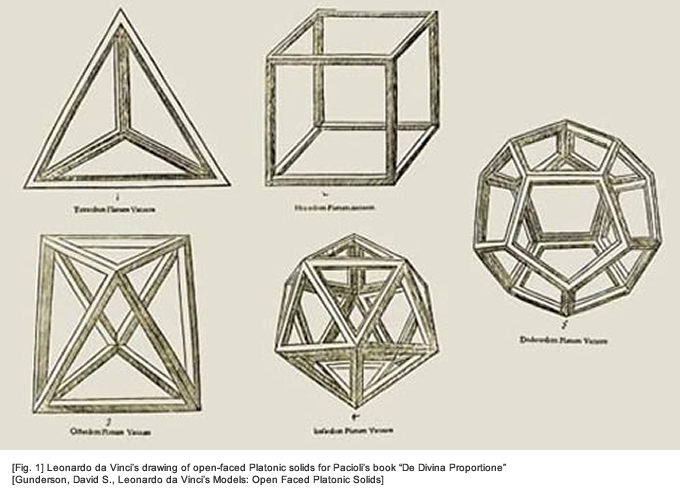 As can be seen in Plato’s Timaeus, space plays a significant role in cosmology. Alongside Models/Ideals and their imitations, Plato uses Χώρα (Chôra), that is, an ‘invisible and formless receptacle… of all becoming’ where Forms are materialised, in a sense close to space (1). Despite the hermeneutic difficulties in fully defining it, Chora has set the foundations of the concept of spatiality, place and placing, while the influence of Plato’s cosmology is evident even in contemporary science.

Chora receives everything, without ever taking the form of the objects that enter her. She is made as a model for all things, which moves and takes the shape of everything she receives; and this is why it seems to be different each time (2)

As Prof. of Philosophy Donald Zeyl explains, Chora can be understood as a “totally characterless subject that temporarily in its various parts gets characterized in various ways” so that the “observed particulars” are only its parts (3).

The relationship between Chora and its contents is not a ‘water-in-a-jug’ relationship. Chora interacts with its contents, while being simultaneously distinct from them in an “unexplainable and complicated way” according to Plato (4). A continuous becoming takes place, as asymmetry causes motion and change. Chora is full of unbalanced and heterogeneous forces; she is both “shaken and shaking” (5). Shapes are created through ideas and numbers. In this creation of the universe, the elementary triangles of the elements are restructured. For instance, during the transitional phases of this creation process, cubes may be disorganised by being cut either at their edges or at the primary triangles from which they have originally derived, resulting in floating flat shapes. Diverse elements are “bonded” with each other through the use of mathematical analogies, so that “intermediate definitions” are connected [Figure 1 -2]. (6) 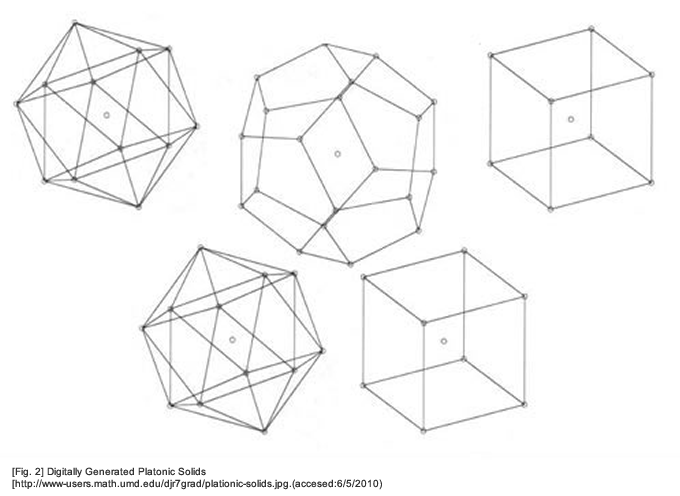 In order to understand the framework of the Platonic Chora, it is important to stress that Plato acknowledges the limitations of cosmology and natural sciences, in a way that relates to the contemporary criticism of scientific limitations. Those limitations still prevail, despite early hopes, like Einstein’s, that new technology would eliminate indeterminacy etc.(7) It is impossible to reach the ‘absolute truth’, due to the distinction between the scientific object and becoming; exactitude and change.

The scientific ‘object’ is changing constantly and thus, natural laws have to be continuously revised and redefined under the light of new evidence. Plato also rejects the possibility of a “higher degree of truth” in “intuitive imagination” (unlike Bergson) and myth. Plato assigns the status of the “exact science” to mathematics, as they seem to lead to the ‘absolute truth’. Mathematics play an important role in his cosmology. As we have already seen, a mathematical matrix characterises the Platonic Chora, enabling the ‘birth’ of forms.(8)

The Platonic Chora has a ‘smooth surface where imitations are imprinted’.(9) The investigation into whether and how the concept of Chora would relate to the algorithmic space of VR is challenging in a philosophical and creative sense, particularly in terms of the ways through which, the boundaries of digital forms are generated through the algorithmic ‘substratum’ of the digital matrix.

A computer 3D modelling system has a highly complex infrastructure that consists of diverse computational models i.e. binary, numerical and graphical.(10) The generation of a digital form is achieved through a series of data conversions that occur between those models with the aid of transformation matrices. Such an infrastructure may be understood as a superimposition of diverse algorithmic grids, through which, a digital form can be progressively generated from the conversion of binary data into assemblages of points that form co-ordinated vectors in an abstract mathematical ‘space’ for creating oriented polygons that are subsequently, joined hierarchically so as to simulate the shaded and coloured 3D boundaries of solid volumes.

Nevertheless, the computational infrastructure tends to be highly abstract, imprecise, irregular and unstable, as it is inherently probabilistic and a-causal. There is a considerable discord between the models of the computational infrastructure, as each of them conforms to very different laws e.g. Boolean algebra axioms versus geometric proofs.(11) Consequently, there are numerous conversion errors in the interchanges between the computational models, which produce paradoxical outcomes, as several precarious interplays occur between complexity and abstraction. 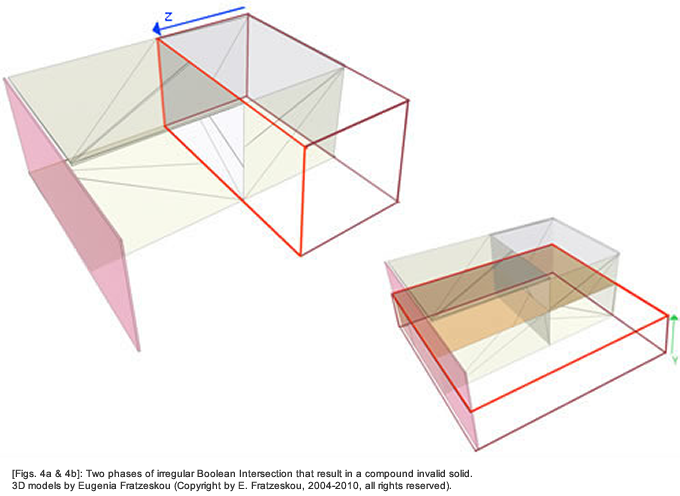 Unexpected geometric visualisations and behaviours are the outcome of a seemingly simple and consistent plan of action. We begin to realise the wider complexity of the co-ordinates that cause inconsistencies between cause and effect, into which, such a plan falls. Complicated excessive beginnings & unsettling elliptical ends emerge that call for new connections.

The algorithmic space of VR cannot be regularised and unified in any way, not even through the simulation of what appears to be a simple and orderly geometric ‘construction’. The inherent irregularities of computer 3D modelling systems undermine the geometrical completeness and thus, the properties and behaviours of digital models. Digital solids become invalid.(12) The visualisation of a digital boundary becomes paradoxical, as the distinctions between void and solid volumes, exterior and interior sides of the digital solid tend to collapse. The case of Boolean volume-based modelling is representative of how such inconsistencies occur. Invalid solids are compound, because the original intersected, unified or subtracted solids cannot be fully integrated to constitute a single solid. The orientation of their surface becomes highly ambiguous, and thus, their geometrical elements are neither well-connected nor properly placed by the application.

Excessive, non-hierarchical polygon accumulation characterises the surfaces of the invalid solid. Consequently, the ‘traces’ of its construction ‘history’ remain visible, as its surfaces maintain the colour, orientation, and triangulation of the original solids. The boundary inconsistencies of an invalid solid include invalid edges (that are fragmented or connect less or more than two surfaces), holes, dangling, infinite, self-intersecting, folded and/or superimposed faces etc. [Figs. 3- 4]

As part of my latest drawing research, a series of hand-drawn diagrams enable the visualisation of the ‘hidden’ stages of boundary generation, during which, paradoxical geometries emerge at the ‘inter-passage’ from one algorithmic model to the other. These stages are not visible when modelling solids. Nevertheless, through the drawings, it has been possible to invent the possible visualisation of those stages creatively, based on how the computer infrastructure operates. The emergence of infra-spaces is of particular interest. They unexpectedly occur between various geometrical orders. Unpredictable and unsettling shifts occur between ideal, realistic and invalid forms that have floating surfaces, excessive boundaries, ambiguous depth, surface tension, dynamic non-oriented constellations of geometrical points, reversed geometry etc. [Figs. 5a & 5b] 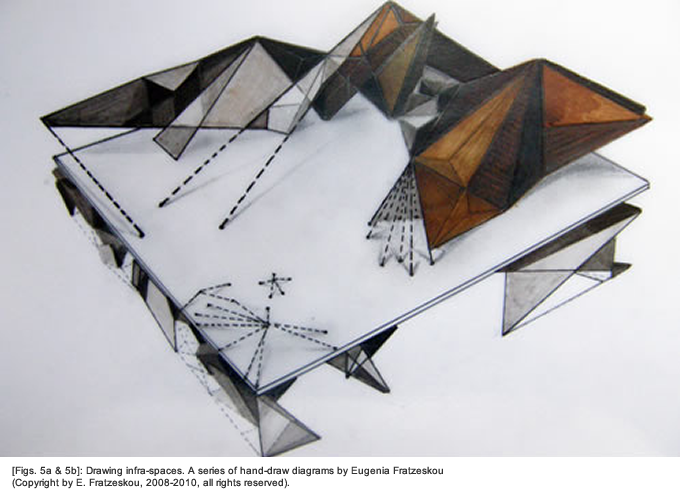 3. FROM SPACE TO PLACE AND VICE VERSA

Traditionally, conventional built architecture is associated with the notions of functionality, stability and order. Based on this rationale, the enclosure, permanence, uniformity, solidity and integrity of the ideal and generic form of the cube are taken for granted. Kenneth Frampton‘s writings on place are of particular relevance here, in terms of understanding the status and purpose of ‘building as dwelling’:

Place, as an Aristotelian phenomenon, arises… at a concrete level with the stablishment of an articulate realm on which man … may come into being. The receptivity… of a place… depends… on its stability in the everyday sense. (13)

As we have seen however, Chora is both shaken and shaking, and full of unbalanced and heterogeneous forces. As we can see in contemporary science and cosmology, space is indeed, polymorphous, while it dynamically and constantly evolves in a similar way. Building on these characteristics, relativistic spaces may emerge through interchangeable states of symmetry and asymmetry. Moreover, dynamic interactions may occur between the various orders of space due to a wider set of changing co-ordinates and variables. Because of those interactions, which may be often invisible and ignored, the conventional concept of the boundary of built architecture is challenged.

This new understanding of space has been informed particularly from Einstein’s theory of relativity, quantum physics and the advancement of information processing technology. According to Lev Manovich, as the educator and critic Monika Bakke describes, this change marks the shift from Modernism to “informationalism”. Consequently, the focal point is not objects and forms, but various ‘information flows’, as space is defined as an ‘informational substance’.(14) Moreover, artists’ and architects’ interest in the interactions between the environment, built architecture and data-scapes has grown, enabling the creation of new kinds of site-specific interventions, spatial practices and theories. (15)

Interestingly, both Chora and VR have a mathematical ‘matrix’. In Chora, the interchangeable phases of dynamic disorganisation and reconstruction are the necessary stages of a cosmogony that is characterised of unity and order, but not of homogeneity, so that heterogeneity and asymmetry cause eternal motion and change. (16) Nevertheless, the generation of digital space in VR is inherently flawed and indeterminate. We may thus argue that instead of the original Platonic solids, we not only get their invalid digital counterparts but also, paradoxical new kinds of geometry that has multiple dimensions. 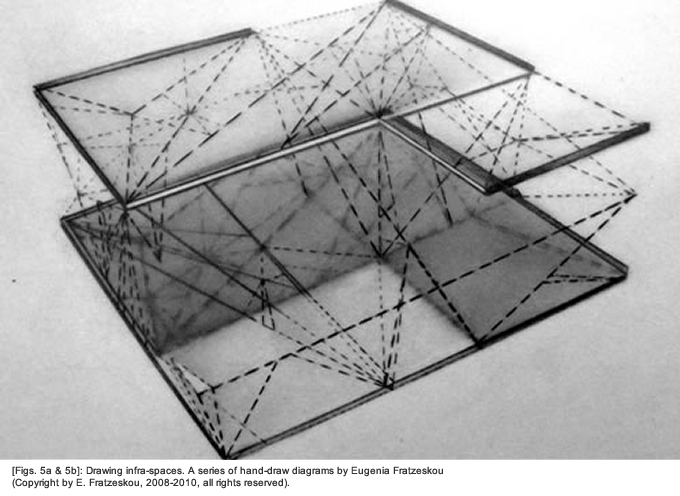 A creative and philosophical investigation of the possible ‘in-between’ spaces of architecture can be inspired by the Platonic Chora in relation to contemporary science, cosmology and the algorithmic space of VR. A conventional type of Modernist built architecture can be perceived as a materialised 3D fragment of a grid. As it derives from the algorithmic matrix of VR, the arithmetic order of the grid is flawed, while the traditional definition and status of the boundary are challenged.

The paradoxical in-between spaces that emerge between the various orders of place and space, can be creatively visualised and explored at the inter-passages that can be invented between those orders.(16) In particular, it is possible to reveal paradoxical ‘residual’ spaces that occur between the superimposed and interacting algorithmic, geometrical, topological and structural grids of architecture.

An inter-passage is not synonymous with the suspension of what S. Kwinter describes as a “mesoformic stage” of substances.(17) This stage is only a passage between incidents of regeneration. As Kwinter claims, the recreation process is only an expected, indeterminate delay in a substance’s route from one state to the other. The mesoformic stage is a predictable linear passage, whereas an inter-passage enables the visualisation of the unexpected half/by-products that originate from a seemingly consistent and simple method of architectural 3D modelling.

The emerging heterogeneous residual spaces are left as an open-ended inter-passage, for inviting viewers’ constant refocusing between the built and virtual boundaries of architecture. It is precisely through this refocusing that our uncertainties of reasoning, spatial perception & memory are exposed, while new types of site-specific art and spatial research are inspired [Figs 6- 7]. 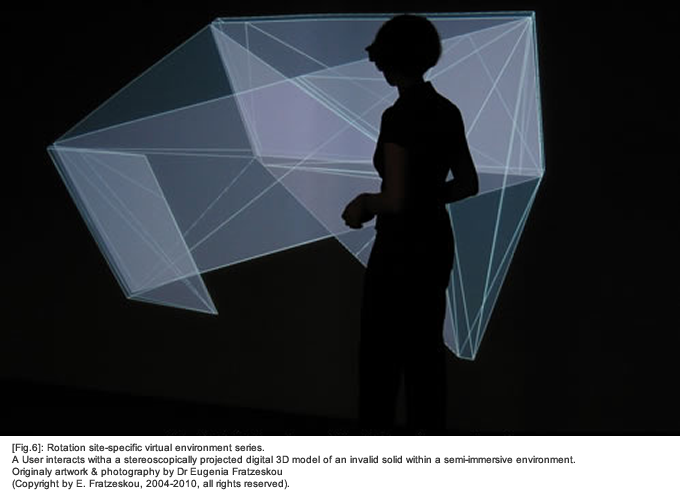