How To Recycle Raee. Manuel Bozzo: Korf And Advanced Art 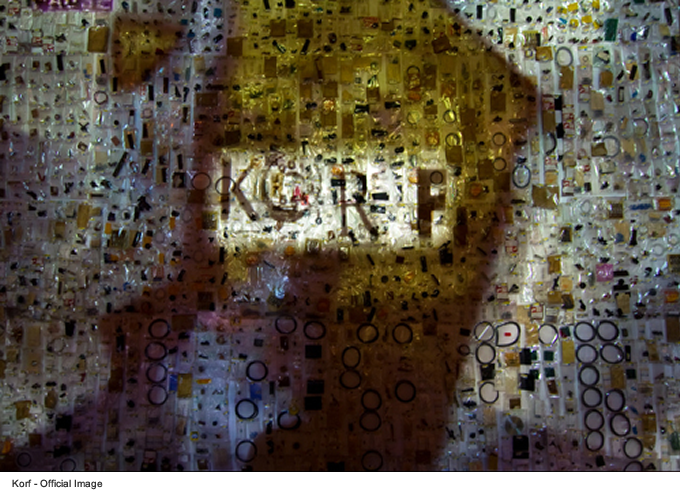 They are called “Rifiuti di Apparecchiature Elettriche ed Elettroniche (Electronic waste)“, the old home and industrial TV devices, cathode ray tubes, that after having been our analogical company for many years are now part of fossil age. And with the widespread of digital technology they are bound to occupy an even larger space in disposal plants. The collective KORF suggested in La Spezia, at the Centro di Arte Contemporanea during an
exposition titled Arte Avanzata, the other side of recycling: TV is not (only) rubbish. This story will be told us by one of the collective’s protagonists: Manuel Bozzo.

I met Manuel Bozzo, aka ManUelBO, after some years since the last interview about his artistic activity (2003): he moved back to La Spezia and restarted making video creations, installations, minimal TV and video-therapy laboratories in a Diurnal Centre (Centro Diurno) La Gabbianella, after some important experiences abroad, above all in Barcelona, where he lived for three years, unsettling palimpsests, aerials and nets. Also collective KORF comes from far away: it was officially funded in 1989 as a musical group which used also scenographies made of slides and videos.

Some supporters of this initiative are Cristiano Guerri, Alfio Antognetti, TINGIS (Giuseppe Cirrito) and Stafano Daveti. Korf 2 will restart with the so called contemporary days at the Social center RDA MAY DAY in La Spezia in October 2008, with the involvement of ManUelBO for the visual artistic and video documentary part. All these people are noted by the art critics Mara Borzone from La Spezia, who suggests them for the lower floor of CAMeC.

Manuel Bozzo is a video maker, performer and creator of TV happening. He began shooting videos with Canale 99: Come prepararsi all’urto di VascTv (1999) was presented during the first Strit Festival in Naples. Vasc Tv experiments the opportunities of “lowering TV at common peolple’s level and therefore goes down into the Spanish outskirts – “o vasc”. Doc Divago by Ch99 investigates on the forthcoming catastrophe of the Millennium end: “Will it be the end of the world? Or has it already happened and we didn’t realized it?” 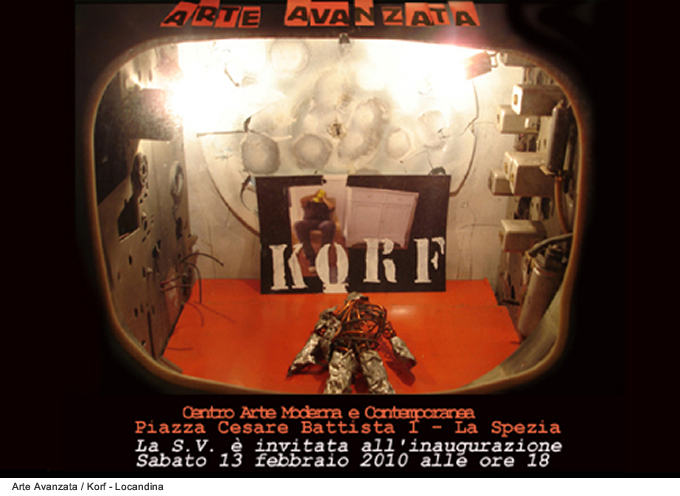 He is co-founder of Candida Tv – the appliance TV funded in Rome in 2000 by OFFline TV’s experience as community television with the slogan “Make your own TV”. Candida TV, one of the most lively alternative networks, is aligned as many other rack aggiomo nets against the big ether corporations and began to broadcast on 18 December 1999 on a TV channel of Lazio region, giving birth to a cycle of nine episodes every Saturday night. Manuel Bozzo is the great SuperVideo, the hero of independent communication, the pop soul of AntiG8.

As turbulent indipendent artist, he shares the collective experience of Candida TV and the great activist enthusiasm of telestreets, taking part into the amusing Soapopia targata Candida, i.e. a performance that invites people to get involved in a collective nation through a collective narration and the stereotyped use of TV soap language (directed during Transmediale in Berlino 2004; in Barcelona during the InMotion Festival 2004; in Roma during Fox-life 2005; in Marino during the Dual Fest 2006).

ManUelBO shot in Barcelona some total structured videos, resulting from laboratories held with convicts (VAS-Video Agèntes Secrètos) and artistic recycling operations with Lucia Egaña (among them desBASURAment, a kind of artistic re-organization of objects considered useless and therefore rejected). Together they opened as live act the independent Cinema Festival of Barcelona in 2008.

The method of re-cycling disposed objects with an artistic aim was applied for the first time in Naples: the assemblies created were put up for auction as works of art. Selected for the 16th edition of the Videominuto Festival at Pecci Museum with Grazie 1000 (work dedicated to the public), ManUelBo won the Chatwin Award 2008 with the documentary film shot in Chile and titled El repujado màs grande del mundo, which is the result of an artistic project with some convicts of the Colina1 prison.

With this story, he took part to the Manifesta 7 in Bolzano, Transmediale 2004 and the last year he was selected for Emergenze i.e. an artistic event in La Spezia province by Matteo Sara and Enrico Formica, held in non conventional places.

In the 2009 edition, Emergenze has been held in a former factory – Vaccari – where ManUelBO shot some video-interviews to ex-workers, who entered again in the factory already closed for years. A work based on the individual, investigating their desires, thoughts, dreams and relationship to other people. Again in 2009, he was present at KLANG, organized by BAU at Villa Paolina in Viareggio, where he showed an installation with a fridge containing a “pouring” of objects, videos and packaging with the title Cibo per la mente (Food for mind).

The video experience brought him to prefer the documentary creative genre. Il resto di ora is the title of the video documentary installation of Candida TV L’ombra delle frequenze for Manifesta 7, European biennial exhibition of Contemporary Art in the readjusted halls of the former Allumnix in Bolzano.

This is exactly his track, his “sign” within the collective exhibition “Arte Avanzata” – Residual Art (or art created with residue), by KORF group, featuring as special guest exactly Candida TV: the homonymous visual doc lasting 40 minutes is a fundamental part of the huge installation works.

The artistic process of KORF collective – multiple entity that groups musicians, graphic designers, visual artists, very important performers (besides ManuelBO, Giuseppe Cirrito aka Tingis -, Emanuele Giannelli, Stefano Daveti with Mario PIXEL Pischedda) – is subordinated to the actions of material recovery (also military) from disposal areas and store-rooms where everything is strictly catalogued, packaged, numbered, labeled and then also signed. And ManUelBO’s video becomes in this way part of the exhibition as further sing of the “treatment” not only of a solid waste but also of memory.

In the exhibition, disorientations and metamorphosis strike the public at first sight: everywerhe there are chips, hardwares, main cards, old technologies joined to different materials (tar, chalk, painting) as in an “impossible supermarket”. And again gramophones, ventilators, sewing machines assembled to TV of many dimensions, maybe also framed with old tyres and whose loop images are broadcast within WCs and chairs while interferences, sounds and noises are emanated in the surrounding environment or can be heard from an old telephone (the installation Ricostruendo il crono visore of Candida TV).

The invasion of little white dinosaurus into an old hardware was very funny. An artisanal not IT rack aggio which moves towards a new art syntax that recovers and re-cycles old methods (analogical) mixing them with the new ones. It is a practice of détournante which produces at the same time immersive and hypnotic effects, a symbolic stockpile that sounds like a bottom up re-appropriation – creative and subversive – of means of communications, transmission channels and nets.

From this point of view, artists seem to auto-create themselves as “constructors” of a new language highly hybridized and symbolic: the untouchable TV device, the fetish object sound through the collective game and demythologized of its totemic presence through a ludic gesture of rupture and assembly is now reanimated.

Once the superfluous elements are deleted – the “figurine” images – and the creativity variables are added, within the TV pruning the only flow that remains active is the vital movement of the five senses. Once the channels are cancelled, only the cerebral waves created by the game remain active. Creativity is freed against the immobility of a TV enclosed in a piece of furniture. 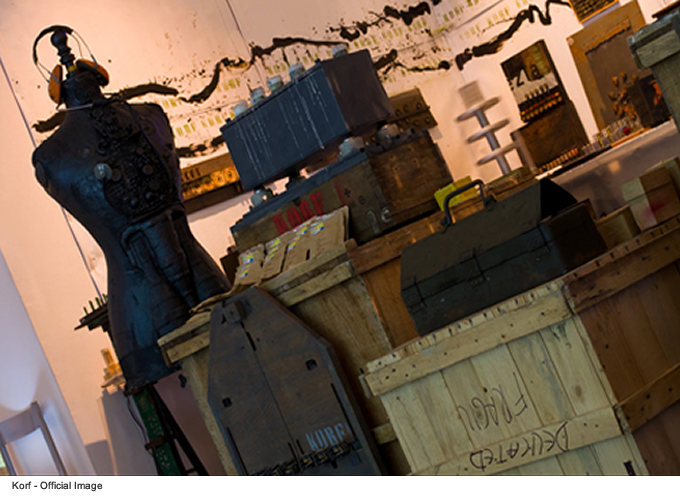 It is impossible not to mention Wolf Vostell that used to create the so called TV Décoll/age through de-structuring of TV images and a critic and violent intervention on TV body, buried in concrete, destroyed with a rifle shot, encaged in a razor wire and smudged with color in order to denounce TV as a dangerous and aberrant object.

Nam June Paik himself, with a typical vanguard gesture, expropriated videos of their primary testimonial function, changing them into objects to be eviscerated in their depth, by interfering with their signal, distorting their images and sounds and connecting them together and with the environment, in order to catch the potential of the new electronic painting/sculpture and declare the birth of a new abstract art, based on time.

If we want to find other references, we could talk about Merzbau by Kurt Schwitters (1923-1924), the composition technique and principle of dada and neodada collage and assemblage (from Max Ernst and Jean Arp to Robert Rauschenberg) and the ready-made by Marcel Duchamp with the concerning concept of aesthetic re-functionalization. Everywhere a bulk (or using Duchamp’s words we should say “growing”) of materials temporary out of production to be proudly re-integrated in the everyday life in this temporary residence represented by the museum. This is actually the history of a lost memory (Rom and RAM), re-found through a path typical of an archeologist, following the tracks of a very recent pre-historical age: everything is an agglomerate of waste and rests, everything becomes unrecognizable from its original form (and use).

“Each century has its own ruins. – says the writer Daniele Del Giudice – Our ruins are from the present time, objects immediately become waste: they have not enough time to become old”. Artists transformed pieces which are far away from their history (a story of production and consumption) into an imaginary inventory and give them a new sense.

This is the today reliquary of the collective installation/work on a wall, made of still recognizable objects under vacuum, without breath, displayed among projections, varnished, plastics and then ordered, catalogued and sealed. Each of them is strictly labeled with the name of KORF. Memorabilia, i.e. “the spoils”. A valid help comes from the leaflet-catalogue “CataKorf”, which offers a list of the objects with their name, number, dimensions and position, as it happens during auctions or at a ironmonger’s. 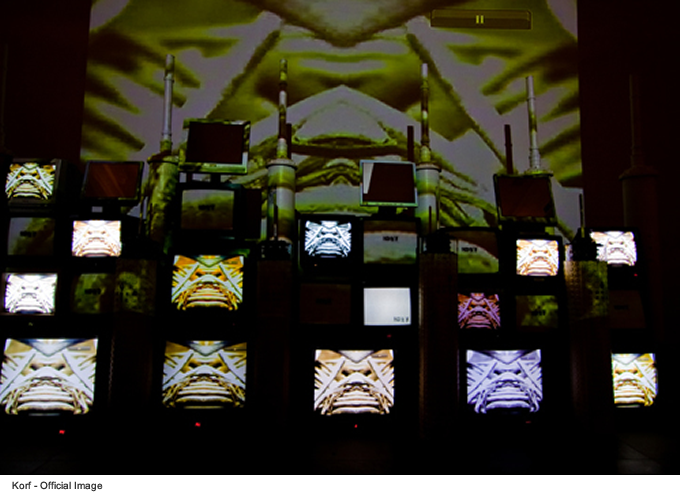 The work titles are extraordinary like the funny matching of materials: “Black with green circuit”, “Circuits and penicillin”, “Electric chair with watering-pot”, “Vape box: white box with used Vape tablets and motor with helix”, “Birthday cake with delayed action”, “4 ghosts wrapped in a brown waxed paper”. Literally totemic was the presence of 12 TV monitors (some of them didn’t function correctly, others were only used as reflecting mirrors) which broadcast with a light time gap the documentation of the re-cycling action in disposing areas.

In this case ManUelBO lined up TV devices in order to reproduce the effect of a video-wall facade and be deceptive as regards contents, that in the end are only an intermittent crazy light and a video projector that overhangs the structure doubling the documentation, which becomes in this way a pure abstract multi-visual, reflecting and infinite sign into space.

CAMeC hosted for some months not only the exhibition by Korf but also projections, meetings and discussions on the same theme, i.e. hackers of social and creative re-appropriation of technologies and topics linked to sustainability and environment, aiming at shaking the world of arts with the force of activism and creating more and more attended events and contexts.

So many meetings on antagonist networks were held as well as on the waste emergency in Campania region (projection of Una montagna di balle, 2009, self-production of InsùTV, telestreet of Campania movements, presented during CinemaAmbiente in Turin), projections by Candida Tv (to which a space in the exhibition was dedicated as present for its 10 years of activity), projections by Telegabbianella, project by ManUelBO’s telestreet created with some disabled people, and meetings with KORF artists. 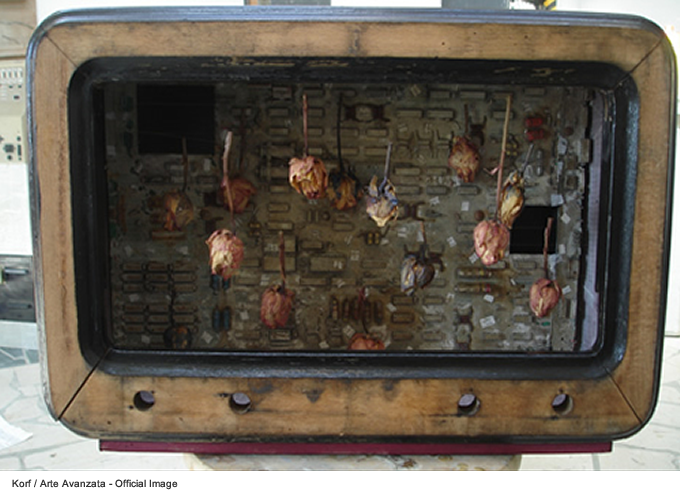 During the finissage it was also organized a video/live performance between the analogic and digital technology: Techno Ominide and the presentation of the new CD by Tingis, Sine Tones. The artists told us that the exhibition is movable…in other words recyclable…we are waiting for proposals.