About Sonic Sculpture. Between Disciplines Categories 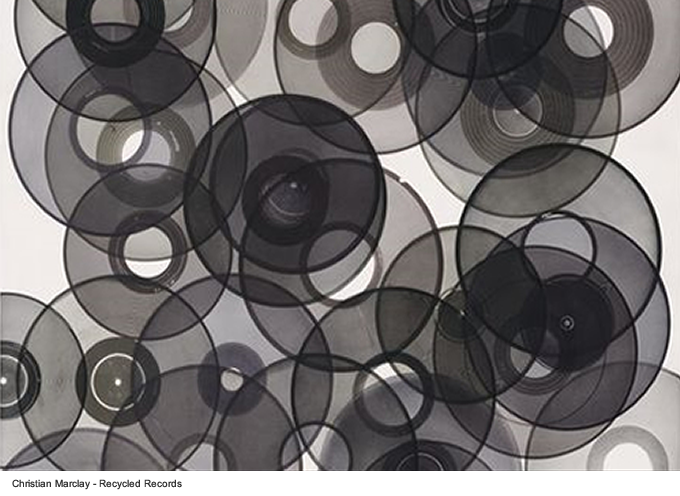 Watching a sound art installation requires a silent contemplation that allows to listen carefully. Sometimes it is not considered as something  as music is  going beyond the limits of a time-based expression. Many sound sculptures, as well as most visual art, have a linear sound structure (e.g. Clown Torture, one of the earliest videos by Bruce Nauman).

But in many cases, sound art rejects music’s potential to compete with other time-based and narrative-driven art forms. Sound art addresses definitely to a more immersive craving for perception: the sound in space.

The great sound-artist Bill Fontana clearly explains: “My transition from working with field recording to sound sculpture occurred as a solution to an unsolved question that became increasingly urgent as my experience with field recording grew: How can I make art of ambient sounds? […] To make art out of an ambient sound, the act of placing this sound would have considerable aesthetic importance. [] In both my field recording and sound sculpture, sounds are not isolated from their contexts; [] For me, the richness and beauty of ambient sounds come from their interaction with a living situation.” (Fontana 1987). 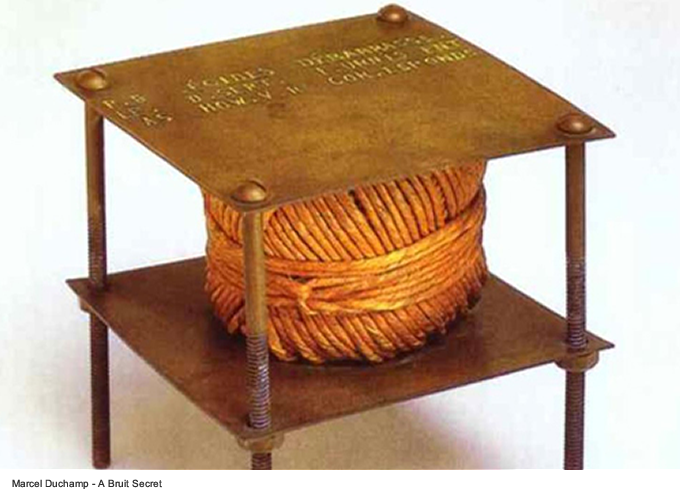 According to the accurate analysis of Alan Licht, we can define sound art in three categories depending on how it is shaped:

For the purposes of this study we will focus our attention on the second kind of expression: a sound artwork as an intricate visual, sound and plastic lump. A sound sculpture is somehow the earliest form of sound art. Suffice it to think about the lithophone  Japanese-stone bells, where stone vibrates when struck by a mallet.

Diachronically speaking, it was the Dada movement (20th century) that ritualized such tension thanks to the avant-garde and starting with Marcel Duchamp, e. g. A Bruit Secret (1916) – a ball of twine containing an unknown object producing a sound when shaken  and Man Ray‘s Indestructible Object (1923/1958), a metronome with a photograph of an eye on pendulum.

Then, sound properties of objects became a key point in First Construction in Metal (1939), the artwork by John Cage who started discussing such properties with Oskar Fischinger, an experimental film maker, in 1936. Cage said: “When I was introduced to him, he began to talk with me about the spirit which is inside each of the objects in this world.

So, he told me, all we need to do to liberate that spirit is to brush past the object, and to draw forth its sound [] in all the many years which followed up [] I never stopped touching things, making them sound and resound, to discover what sound they could produce. Wherever I went, I always listened to objects.” (Kahn 1999, pp. 196-197). 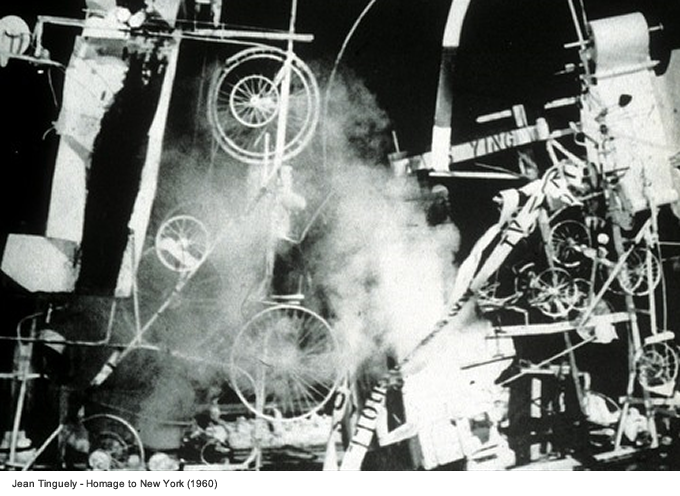 The greatest representatives of contemporary sound art are Jean Tinguely, Harry Bertoia and Baschet brothers, between the mid ’50s and the early ’60s. In particular, the use of engines by Tinguely is in the tradition of Luigi Russolo‘s manifesto on the art of noises.

John Driscoll‘s Second Mesa (robotized rotating loudspeakers taking advantage of the acoustic properties of the space), and Felix Hess‘ sound creatures (automata deriving from studies on frogs’ croak, which “listen” through microphones and respond with electronic sounds) can be considered as the next examples of sound machines.

Three kinetic sculptors, Tinguely’s followers,  Len Lye, Nicholas Schoffer and Barberis Takis  also worked with sound. Lye produced several sound sculptures since the early ʼ60s: Blade (early ’70s) is a two-meter-tall steel blade pounding away at a cork ball; it produces the sound of a saw rapidly oscillating. Storm King (1997) and Twisters (1977) are more striking, with silence suddenly bursting in hurricanes of sound. During the early ʼ80s, Schoffer made his first experiment programming music for computer at IRCAM.

During the ’50s, Takis made his early sound sculptures, starkly belonging to ambient sound art: in Signals, wind makes piano strings vibrate and produce sound. In 1963 he created Sound of the Void in collaboration with the composer Earle Brown. This artwork reveals Takis’s interest in using magnets in sound sculptures: the electricity produced by magnets caused a needle to strike a string activating repeated musical sounds. Fifteen years later, Takis produced his “electro musicals”, placing several artworks of needles and strings in a room (the strings were placed on canvas and amplified).

Another relevant sound sculptor is Robert Rutman, an abstract impressionist painter who produced the Steel Cello and the Bow Chime during the late ’60s. The Steel Cello was constructed out of an eight-by-four-foot metal sheet. The steel vibrates when the string is bowed. The Bow Chime is a horizontal steel sheet vibrating when the vertical steel rods are bowed. Such instruments produce sub tones and white noises as well as sub-tonic frequencies. 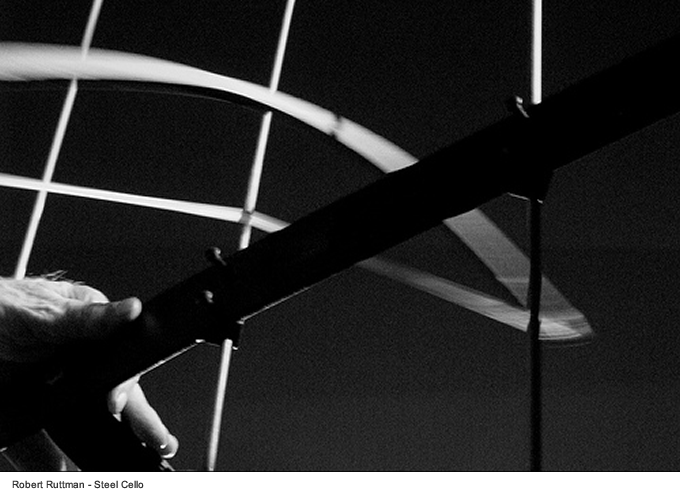 Stephan von Heune and Martin Riches are two sound sculptors in the strict sense of the word  they have produced musical automatic machines since the ’70s. Yoshi Wada joined the Fluxus group and studied with Pandit Pran Nath. During the early ’70s, he made his first experiments using hydraulic plumbing and copper pipes as wind instruments. It led to his adapted bagpipes  huge installations (the size of a room) made up of a very long pipe, with a bag connected to an air compressor.

In 1967, David Jacobs produced a similar artwork, called Wah Wah’s, using pipes and rubber. Afterwards, that sound sculpture was reconfigured as Hanging Pieces that could produce up to 5000 partials, secondary beats and other musical and psychoacoustic effects.

Andreas Oldorp was also appealed by organ pipes; he started producing artworks in the late ʼ80s. He mostly used pipes made by himself experimenting new ways to constantly tune them  pipes are often fuelled by gas and glass tubes.

Richard Lerman produced a classic artwork during the ’70s, Travelon Gamelon  the microphones are jammed on a bicycle spokes and sounds are amplified by the bicycle frame. Norbert Moslang and Andy Guhl made similar discovers on latent sounds produced by ‘cracked everyday electronics’.

That duo of Swiss musicians, better known as Voice Crack, performed from the end of the ’70s until the end of the ’90s. Moslang wrote: “To me electronic tools are not merely useful black boxes producing a pre-defined effect; they are rather flexible units that in most cases contain far more hidden functions than they were originally designed for” (Moslang 2004, p. 84). Voice Crack‘s performances were really impressive also from a visual perspective, and their sonic mixture was one of the best noise experience of the second half of the 19th century.

Peter Vogel, Walter Giers and Howard Jones created tracks on the wall using generally interactive loudspeakers and other media turned off by the presence of the observer. Such artworks showed the way to the latest life-size installation of Christina Kubisch, Tommi Gronlund, Paolo Piscicelli, Carsten Nicolai and others.

It can be difficult to understand what we are talking about. According to what Licht says, it is easier to define by contrast what drifts away from the definition of “sound sculpture”. That is possible by focusing our attention on the misunderstandings due to nuances between the categories mentioned above. 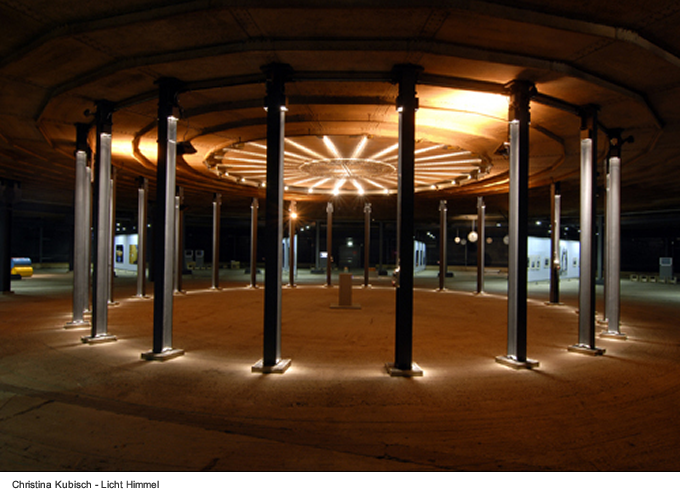 As to what misleading interpretations are, we can mention Sound Sculpture As, the exhibition curated in 1970 by Tom Marioni at the Museum of Contemporary Art in San Francisco  conceptual pieces like urinating into a bucket, or a phone ringing although the receiver was picked up.

Concrete music seen as sound art represents another misunderstanding: it was just a matter of time before artists considered sound (and subsequently, sound recorded on tape) as a physical material to manipulate. That is what Brian Eno said about tape: “A substance which is malleable and mutable and cuttable.” Robin Minard, sound artist and writer, says: “Pierre Schaeffer‘s sound becomes a material to be carved. Sound matter was previously assembled and then manipulated. It was cut in pieces, played forward and backwards, transposed and put on a loop.” (Minard 2002, p.46)

Music on tape undoubtedly transformed sound in a physical material, but such processes were more linked to the “cut” of cinematography than to sculpturing. With the ritocco, what is recorded can be manipulated with several techniques: backward listening, juxtaposition with other scenes in order to create particular effects, double exposure, and so on. Paul D. Miller (aka DjSpooky) told that sampling is a kind of sculpturing.

In this case Licht’s categories underline very deep nuances as well as when we talk about disc as a sculpture: Marchel Duchamp’s Rotoreliefs (6 “optical discs” with drawings, on a rotating surface at a speed of 33 1/3 rpm (1935); Cage introduced turntable systems in his Imaginary Landscape (1939) and 33 1/3 (1969); more specifically, Milan Knizak‘s “broken music” is made of cutting up records and gluing different parts back together (1960s); during the late ’70s and ’80s, Christian Marclay did the same with his “recycled records”. They both played disks at different speed and different level of damage. 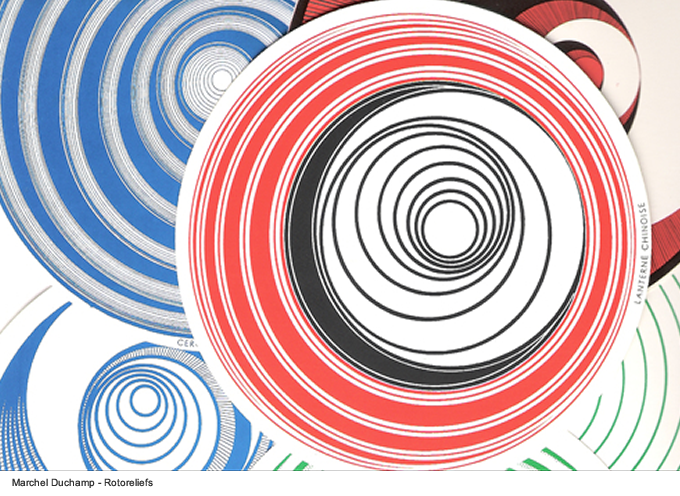