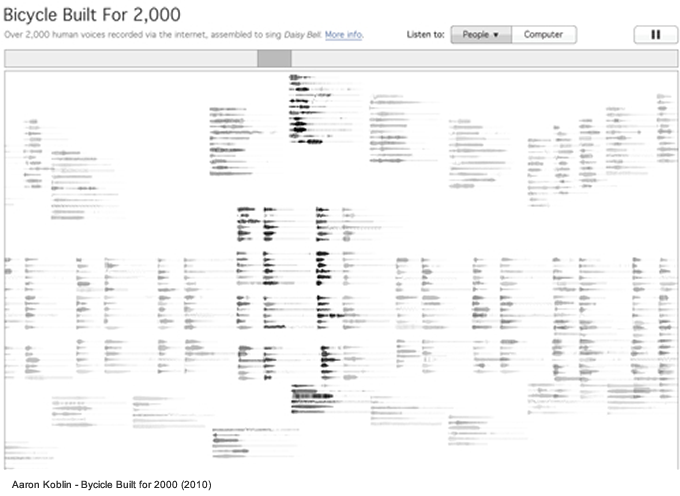 A couple of years ago Lev Manovich, famous guru of new media, was introducing the concept of Information Aesthetics, referring to the ways of visualizing emerging information and based on the creativity and alternative representations. On the basis of this concept, quantitive and qualitative data have become the main interest and desire of artists and designers, who have already begun to experiment new techniques and ways to generate shapes and fabulous software.

Today info-aesthetics could be considered as an actual academic discipline, but most of all a fertile context of research and planning, where key elements for the “information society” are discussed, like for example, information overload, decision making processes, interfaces rom the future and the elaboration techniques of data on the spot.

Out of all the people, who are contributing to this project, introducing new conceptual elements and technological experimentation, Aaron Koblin plays an important role.

A Californian artist specialized in the visualization of data through artistic projects. After completing a masters degree in Media Art at UCLA, he expanded the field of artistic visualization of live data, exhibiting his work in many international festivals such as; Ars Electronica, SIGGRAPH and Transmediale, without leaving out an extraordinary exhibition at the MOMA in New York.

A fan of programming open source codes and Processing, Aaron Koblin started working on the aesthetic result of visualization of data through live generation processes (Flight Patterns – 2005 and NYTE – 2008), then experimenting with visualization based on lasers and 3D scanners (House of Scanners – 2008) and processes of crowd sourcing through the web (Ten Thousand Cents – 2008 and The Sheep Market – 2008). This is the interview I had with Aaron Koblin, in order to understand the formation of his artistic approach. 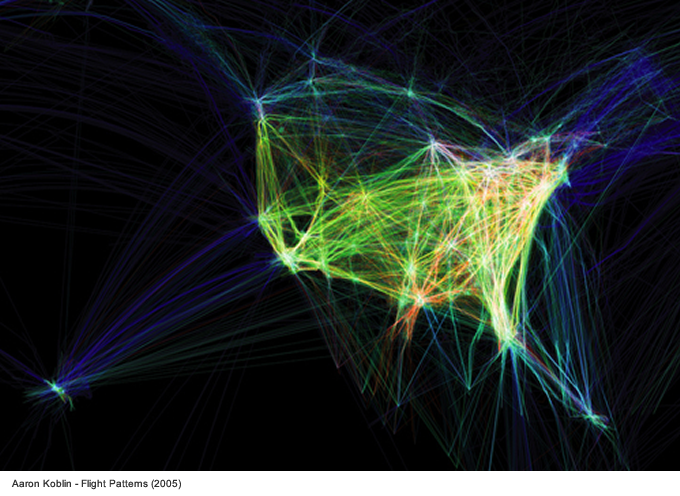 Serena Cangiano: Let’s start from the Bicycle Built for 2000 project, rewarded during the Transmediale Festival in 2010. The web software allows you to listen to the song called Daisy Bell, obtained by registering 2000 voices from the web. Could you tell us the concept behind this project that seems to present new elements different from your research in the visualization field?

Aaron Koblin: I think the unique thing about Bycicle built for 2.000 project is the use of the Mechanical Turk software for artistic projects. Mechanical Turk, the webservice by Amazon that allow software developers to coordinate users that execute tasks which computers cannot be able to complete. Merchanical Turk offers different forms of crowd-sourcing specifically where the people are participating really don’t having any context of the overall project that they are building. There is a little statement underneath this concept: everybody is not working together to build something starting from they own knowledge, they’re exploited to build something through a computer.

This is connected with the idea of artificial intelligence. With my collaborator Daniel Massey, I worked on Bycicle built for 2.000 by creating an granular audio synthesis of human voices through the internet , specifically from the Mechanical Tturk software. We, actually, paid young people to record their individual sounds, piece of lyrics and, then, we reassembled them all into this massive vocal granular synthesized audio recording.

Serena Cangiano: Analyzing your new work it seems to me that the experimental aspects of your research are very focused on the demonstration of what technology is capable of, the types of images that its able to produce, the sequences and processes that it allows us to visualize things in realtime. It is possible to talk about experimentation based on the aesthetics of coding, of pure research based on the manipulation of codes and the development of complex softwares? What ideas and reasons guide you the realization of your projects?

Aaron Koblin: My approach is different for each project: as a general motivation “I follow my curiosity”, but sometimes that is a different thing. In some projects the curiosity is more on the conceptual level that system is linked to, on a kind of larger question and cultural implication. But definitely I’m very interested into building and innovating and creating: the idea of getting a technical proficiency and exploring physically something, experimenting it through the code and then also through what that means in a broader stand point. I started off more on the side of the technical experimentation: I’m interested in how to create systems that were like emergent software visualizations and eventually I became more interested in visualizing systems that were abstract or just simulations. During the design process, the project leads me to more and relevant questions and in to a more engaging dialogue. 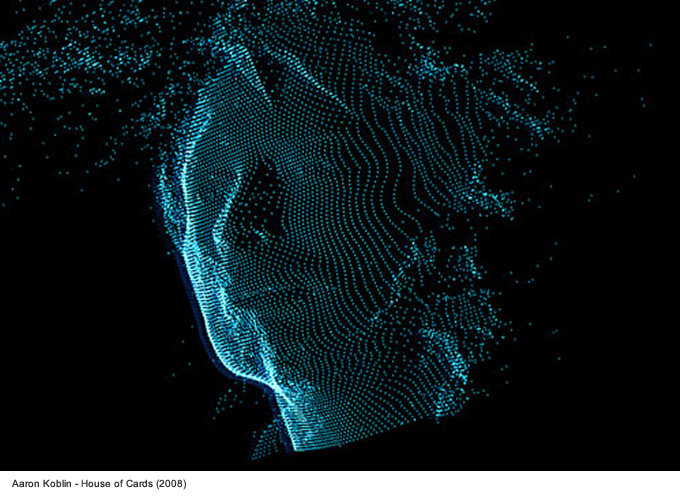 Serena Cangiano:I read on your Processing.org webpage, that you are taking great interest in the visualization of data through systems that are not based on the monitors or video displays.

Aaron Koblin: I’m not interested in non screen based works. I spent a lot of time really experimenting with physical software but sometimes I found it a little bit frustrating, because when you deal with physic stuffs and electronics “things go quickly crazy”. I’m extremely and especially intrigued by some high level options, like multi-touch displays, iPad and any other devices. In particular, I’m exited by Processing, the programming language that I like using, with which you can develop interesting interfaces, start programming for portable devices.

I think portable devices allow experimentations not only in the field of augmented reality but in the design of improved user interfaces that go beyond. We are now starting to see the way they can affect things like ambient exploration, where they actively seek for what the user is looking for. They can be a really nice way of presenting information in our daily life in an augmented modality.

Serena Cangiano: So you think that it necessary to work on new ways of visualizing information? Of finding new solutions, more suitable for the new instruments available? Reflect on new formal ways and future functions that present data?

Aaron Koblin: We live in an age where there is an abundance of informations that are becoming more intertwined with our daily life: the exposition to data is inevitable. The way we can now make decisions is affected by how the data are introduced to our life. We should create more culture about data and interfaces because they are a reflection about life. Data is supposed to be a really scientific, obscure desired commodity. That’s why I think is important that we do think about the aesthetics of data and informations. 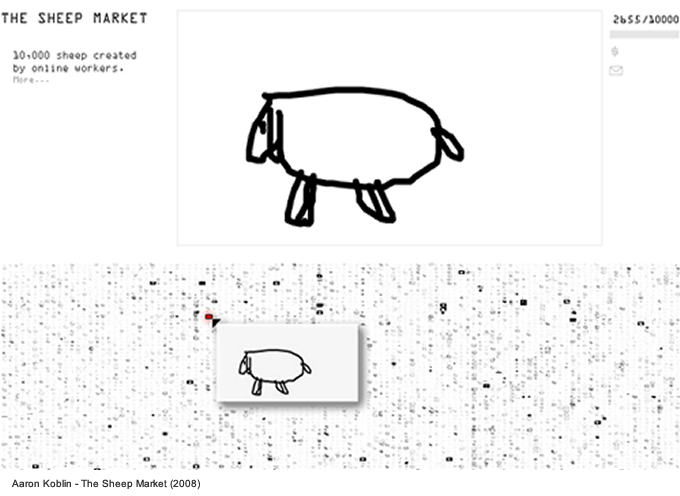 Aaron Koblin: Chrome Experiments is a website that is a sort of showcase where people reflects about a web browsers as a medium to start creating experiments that are different from what you can experience typically in a web browser. The projects are particularly focused on the open standards because if you look at technology as Javascript, Html 5 and languages that are supported by open source browsers, you can do all things that go beyond what you can traditionally build with Html. Chrome Experiments is a kind of place for artists, hackers, thinkers showing any kind of experimentations: some of them are conceptually thinking about what a web browser means.

And if we think that a lot of people in general aren’t even familiar with what a web browser is, It’s a big challenge when you want to get people thinking about open source, web standards and about what means actually choose a web browser to begin it. At Google Creative Lab, my job is to share all kind of wonderful things about Google. It’s a kind of dream job where I experiment technology, make fun things and share knowledge with other people.