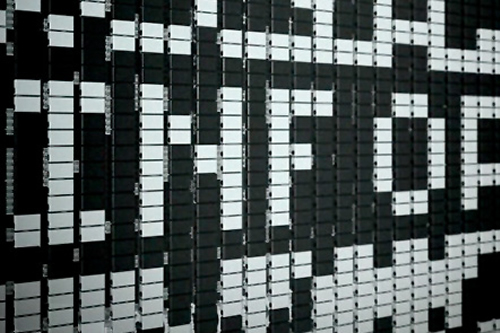 When is a work of art a design object? When it has a utilitarian purpose? When it has no purpose but is designed to encapsulate a concept that relates to human experience and attempting to capture something about the essence of our existence? Or when the sign on the gallery wall says so? This was the first question that crossed my mind when I arrived the the Victoria & Albert Museum in London to view the Decode exhibition. The exhibition ran from 8th December 2009 until 11th April 2010.

In the context of the museum all of the work on display was design work. Which may come as a surprise to the people who would have originally commissioned or funded some of the work, because much of it originated within an art world context. I’m not sure where the imagined divide between art and design may sit, but it was certainly one question raised by the exhibition. What seemed more important about this work was the chance to move media art into a broader public awareness. Despite all the festivals, conferences and conversations that take place across the Internet, it can still feel as though media art operates within a narrow framework of artists, critics and specialists.

On the day that I visited the exhibition, I was fortunate enough to be in with crowds of schoolchildren. Normally it would be terrible to be stuck with children running around and calling out to each other when you’re trying to think about such lofty thoughts as art versus design. But in the context of Decode, it felt like the perfect opportunity to observe how people who hadn’t spent time absorbing and thinking about art and design would react. For these visitors, the interactive projects became spectacle and entertainment.

With the interactive works it meant taking ownership of the imagery and entertaining each other. This was media arts as place of pop culture entertainment and performance. Which made me think about the multiple layers of art. Just as it’s possible to watch the television program Big Brother and think about media and technology along with socio-cultural influences, while also being able to watch it for the childishness and gossip factor. 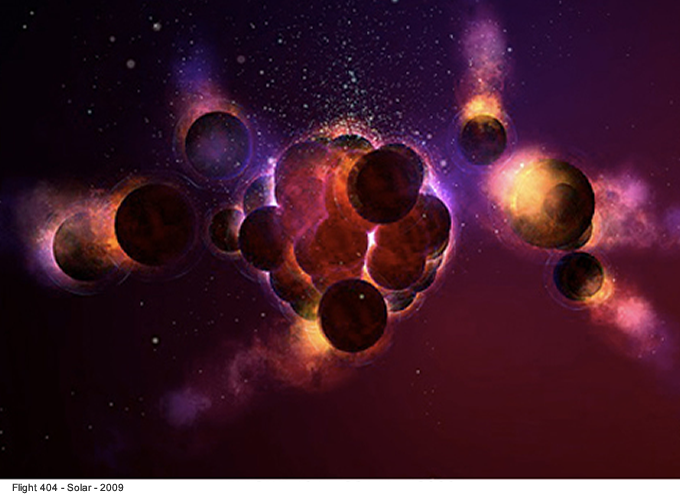 So it was at the Decode exhibition. The schoolchildren thought of the work in the most sublime and straightforward way: the work was just fun and interactive. It was comforting to know that the young visitors instantly understood how to use the works on display, taking ownership of the projected images and using them to amuse and entertain each other.

They have no reservations about standing in front of mirrors and posing or having their portrait taken and added to a collage to be shown to their friends. Decode rightly belonged in the Victoria & Albert museum, with its origins in London’s Great Exhibition of 1851 that celebrated world culture and industry: which, it could be argued, is exactly the position from within which media arts operates.

Reflecting back to us the best that current technology has to offer. As well as lessons and warnings about the potential hazards of the military-industrial complex.

The exhibition is broken into three themes addressing the notion of digital design as technological product, rather than any kind of artistic metaphor. It’s an interesting choice to make, as many of the works may well have worked alongside each other under other themes. The first theme is Code as Raw Material, showing works that create art spontaneously from code. The catalogue says that the new designs ‘carved’ on the screen are from the raw materials of code in the same way that a real world sculpture might be carved from clay or wood.

Daniel Brown exhibits a piece from his On Growth and Form series, which takes it’s inspiration from the Victoria & Albert collections. These screen-based works sit in a narrow corridor that you enter the gallery space through. The closed in intimacy of the space, means that you’re forced into closer relationship with the screens that you might have ordinarily be.

It’s a good decision to make, if the intent was to remind traditional gallery going visitors that these are works are for close scrutiny and that there is no limit on how close you can get to them (unlike traditional art works, perhaps?) then they have succeeded.

The flowing, patterned screens work well and, as the first taster of the exhibition, present the most aestehtically pleasing of the works on display. 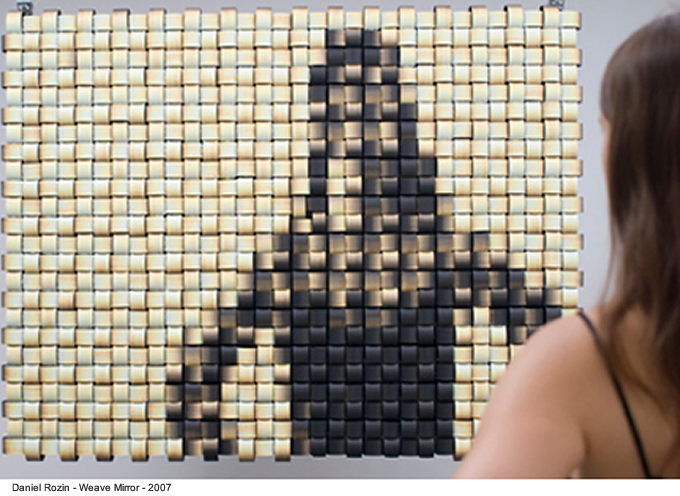 The interactive themed works also include many familiar names, such as Golan Levin. Weave Mirror by Daniel Rozin offers an unusual aesthetic for the exhibition reminding visitors that the works aren’t just about the stylised images they might encounter in film or computer screen. These draw the viewer in and demand some action. It’s appropriate that the works place the viewer at the centre of the piece, sometimes quite literally, as with Venetian Blind by Fabrica. This piece places the viewer within an ornate glass mirror, although the image takes a few seconds to appear, in the style of old Polaroid photographs.

The final category seems to be the one that finally addresses the result of our using the technologies and offer a comment on our passing through the new technological landscape. The selected works respond to the traces left within the network by human behaviour and creative activity. In We Feel Fine, by Jonathon Harris and Sep Kamvar, blog comments that are emotional responses to blog posts. Taken from across the world, they build to represent the information as floating information spheres. 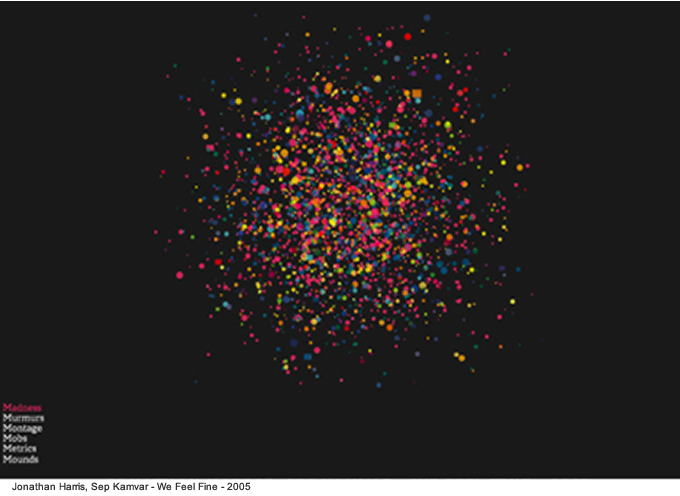 On the day that I visited the exhibition, at least two of the works were either not functioning or had been shut down. The signs telling the public that the works was temporarily off line and would be available soon, as with many media art exhibitions throughout the world, said more about our contemporary technological culture than any artists created project ever could.