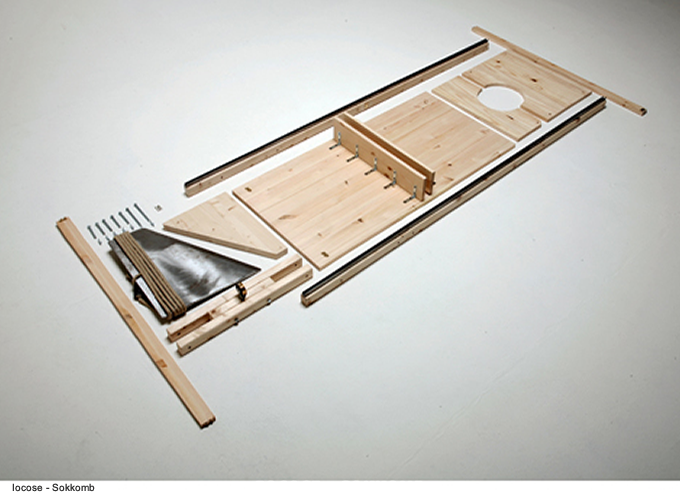 IOCOSE is the name of a collective born in Bologna in 2006. Their style, although being lightheartedly artistic-prank, also includes in its practices a series of questions which arise from a mature relation with the Internet, new media and social networks. Among other exhibitions, IOCOSE also presented their works at the last edition of The Influencers in Barcelona.

IOCOSE projects could be described as injections of surrealism in everyday reality. Surrealism as a way of bringing thoughts, tendencies and existing practices to the extreme. The group has tackled several issues: religion (Empaty Box), Italian society and politics (Søkkømb, Doughboys, Yes we spam!), Google (NextQuery), youTube and our tendency to quickly drown ourselves in user generated content sea (No Tube Contest) and foreseeable evolutions in chemicals by corporations as Rovagnati and such (MenoPausaPranzo).

All of their projects are substantially provocative and make use media as tactical tools. From flash mob, pranks and hoaxes , to mimesis and a range of different tricks, all of these are instruments to “deceive the public and get it trapped in a semantic snare”. IOCOSE put on stage futuristic, colourful depictions of how nowadays situation could degenerate in something twisted and gruesome. Through actions, websites and social networks, concepts and attentively made artefacts are presented, making cross sections of contemporary society being crudely exposed.

At The Influencers 2010 they presented Søkkømb, an IKEA style Do It Yourself guillotine. “Are you feeling increasingly annoyed by all the criminals and immigrants and all those people we should simply get rid of? […] You are the person we have thought of when we were designing Søkkømb, an easy to assemble guillotine for the whole family. A practical, flawless and fast solution, perfect for fulfilling your need of safety”. The guillotine was protagonist of two main actions, in which IOCOSE assembled Søkkømb in front of the IKEA there is in Bologna as well as inside the IKEA in Barcellona.

Søkkømb pictures a world where the worst tendencies laying within society (especially in Italian society) become a mass -consumed commodity. It is the most appalling side of what Luttazzi has recently named “State racism”. 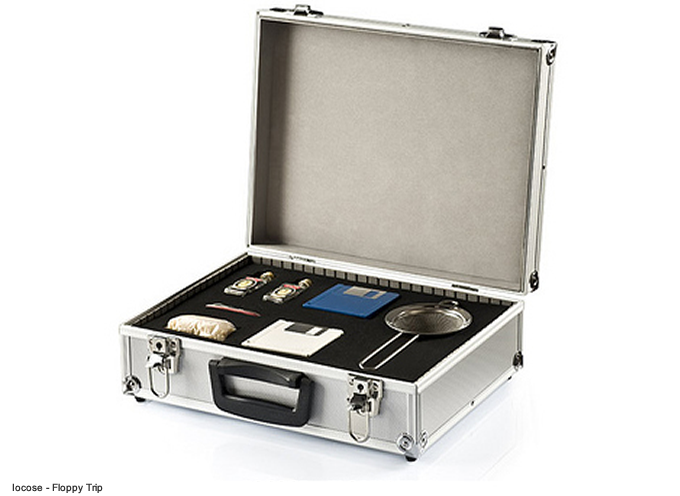 Floppy Trip recycles floppy discs. Creating a drug. What would happen if we gave a Floppy to a today’s 15-years-old brain-fried by glue? How can we take the most advantage from the potential of this outdated technology through recycling and fulfill new generations’ needs? “Floppy Trip is the ultimate frontier of recycling. This cutting-edge smart drug appeases everyone, from the young teenager who’s never seen a floppy disc before, to the old nostalgic nerd.”Floppy Trip is an installation consisting in a kit, tidily set in a metal suitcase and provided with a video explaining how to use it.

Floppy Trip was presented in the occasion of Pixxelpoint festival 2009 edition, entitled “Once upon a time in the west” and dedicated to the relation we have with the fast-growing obsolescence of modern technologies, to the sentimentality bounding us to technologic devices belonging to our past. Artists responded setting forth animated gifs, videos and so on in the attempt of developing in an artistic way means been proved an well known to have technical limits, instead of turning to the exploration of internet vastness and nowadays’ calculators.

Empathy Box instead, was presented during Pixxellpoint 2008 edition, entitled “For GOD sake!”. IOCOSE gets inspiration from the Empaty Box P. Dick describes in his “Do androids dream of electric sheep?” and transforms it. Empathy Box is as matter of fact a project from the “Bureau of united religions”, an object designed in order to take advantage of consumer electronics in the religious field, turning religion into something appealing for young generations.

Empathy Box makes possible for a group of people to experience the empathy entailed in the partaking of pain. Pain that can, amongst other things, be identified as the only common factor in all religions. Empathy Box is a machine that can “be used by a group of people to receive electric discharges, and thus share a true, forceful feeling.”

In the projects made by IOCOSE art and politics hence blend, becoming a social experiment. Following the path of masters such as 0100101110101101.org, Vuk Cosic, eToy and Ubermorgen, IOCOSE ‘hassling’ its audience. Provocation can give rise to reflection, leading who sees the artwork to think, questioning himself and his values, but could as well bring to misinterpret the oeuvre, concentrating on pointless details, ending up speaking merely about the artist. What really matters is the reaction being triggered, since that is what shows us wether a work of art is able to leave a mark, how forceful it is, which actually are the topics it leads to talk about.

And it is indeed the quality of such discussions the thing that worth the most. IOCOSE way of provoking audience is aimed to bring to catharsis. There is no hope trying to be instilled, nor positive depictions neither positive proposes in this collective’s works; it is rather about twisted dreams and nightmares being thrown in our face preventing us from glimpsing a way out from the problems. All at the while these surreal games and distorted jokes being characterized by a strong dark humor. They are tricks working as assessments of our consciences. Until/to what extent are we willing to believe? How much are we willing to accept? 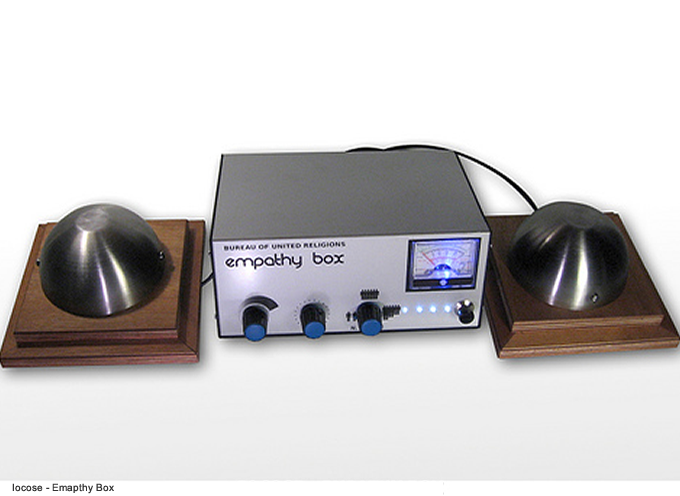 IOCOSE: IOCOSE was born in 2006 in Bologna, where we all were studying at the time. During the last two years the group defined and strengthened its four-members configuration. IOCOSE first originated from one staple belief: Boredom does not exist and Reality is overrated. We never endeavoured to find the way to solve problems, neither to forthbring solutions to the various issues being tackled in our projects. We have always had one sole intent: insinuating doubt.

Elena Gianni:Quoting: “We are fascinated by the most sensational things, overdramatized and seemingly senseless”. Could you give further explanation on what inspires you? How do your projects come to life?

IOCOSE: Each project originates from some idea which is usually hard to be explained, complex and convoluted, where each detail appears to be essential and every conceivable synthesis would rule out a staple point of the basic idea. Even so, a decision on the way to clarify what is hard to be explained must be taken, becomes vital and brings the whole group to the verge of paranoia. At such stage we do usually ban democracy from any decisional procedure. Then everything else just comes up, we don’t have to invent anything any further.

Elena Gianni: You make use of media to get to the vastest audience that is possible, and I do suppose public responds to your works in disparate ways: a furious bigoted politician, a nonchalant girl. Moreover, I guess that you gain much more gratification from seeing people getting irked, outraged, reacting impulsively. Which one would your ideal public be? Which are the reactions you are trying to obtain?’

IOCOSE: The reactions to our projects have, as a matter of fact, been always varied and complex. At the time we diffused the spam Yes, We Spam! people told us all sorts of things. For the work about underdeveloped countries’ dogs we collected as many awards as threats. Essentially, our activity is about stirring up situations, then some can misunderstand and get mad, some mistake even more and praise us.

It’s one of the good aspects of acting on such a plurality of means and locations (from the Web to the streets, from art galleries to newspapers). Each time we get to work on different audiences and expectations, and each time we push to make them go off the lines. Then, from that point some find their way back home, some just remain there, appalled. We couldn’t tell what we do prefer. 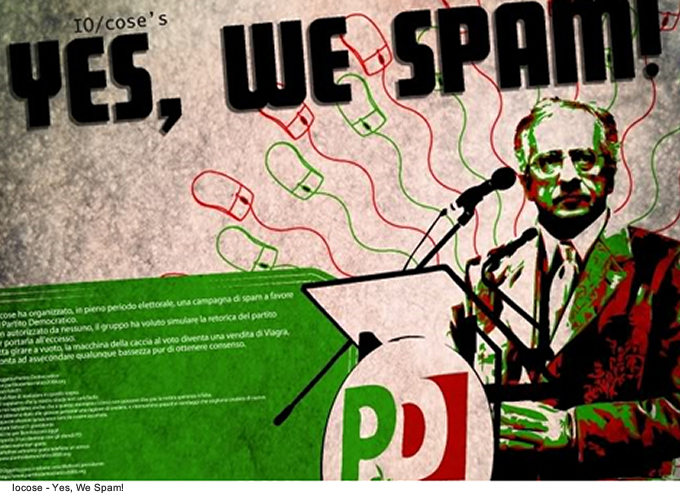 Elena Gianni: Characters as 0100101110101101.org, Vuk Cosic, eToy and Ubermorgen are your direct predecessors. You embody a new generation. What makes you different?

IOCOSE: Well, representing a different generation, we might obviously be different. Notwithstanding, how long a generation does last? 25-30 years? According to us, that is not enough for claiming to be representing a new generation. Our works take for granted that new media art does not constitute a niche within contemporary art, not a new thing seeking ratification, as it could have been 10 years ago with the first works from 01, eToy, Vuk Cosic. It is nothing but a further option to choose amidst others. We differentiate the offer, that’s all.

Elena Gianni: Sokkomb and Floppy Trip are amongst your latest projects. They both are actual objects, nor websites neither softwares. If it is that you are turning back to material objects, could you clarify what this fascination and these changes consist in?

IOCOSE: To tell the truth, there isn’t any proper reversal of tendencies going on. Everything is hardware, or has to deal with it. Software stands as a metaphor. Yes, We Spam! had to manage the limits of a server and an internet connection running through cables, which cable ran through territories subjected to laws. The Doughboys were a collective hallucination, even so moving in the streets and happening at precise times and places. Floppy Trip isn’t any more tangible than these ones.

Neither is Sokkomb, if you consider that the discrepancy in figures between the ones that have actually touched it and the ones that have just talked about it is remarkably huge. Stories do have need of mouths and hands to be diffused, eyes and ears to be acknowledged. ‘We are material boys in a material world’. 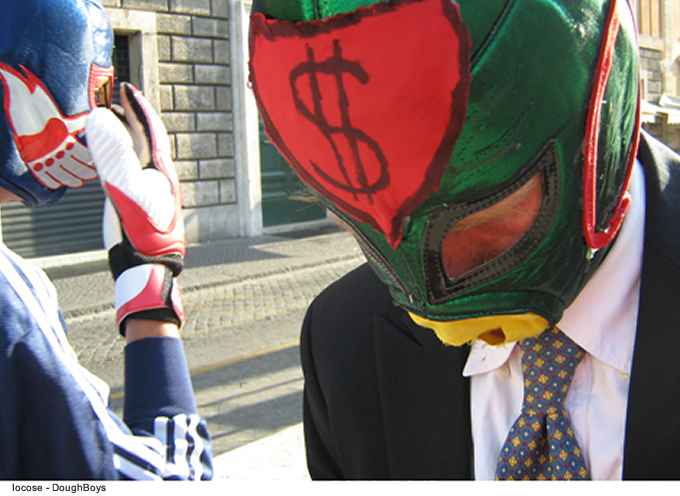 Elena Gianni: I quote you once again: ” Our projects reflect our viewpoint on the world, but primarily the conception of future that we have.” How would this future might then be, according to IOCOSE?

IOCOSE:Near future is going to be ruled by reptilians, who after 2012, together with freemasons and Scientology disciples, will fight for planet’s resources control. Closely following, inhabitants of planet Nibiru, which will by the time have completed its 3600 years rotation cycle. This will cause such violent tsunamis and earthquakes that every kind of brainwash attempted by promoters of seigniorage during the last five hundred years would be made vain. No chemtrails or reversed Obama speeches would be of any worth. Hallelujah.