Jacob Kirkeegard. The Poetics Of The Space 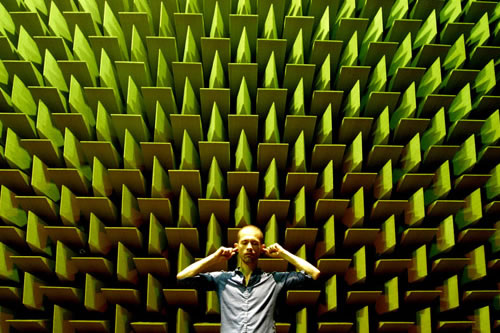 From the 25th till the 28th of February the 13th edition of the Sonic Acts Festival took place in Amsterdam. This edition  The Poetic of Space  was entirely dedicated to the exploration of space in performative, audiovisual and film arts. Sonic Acts has become a moment for investigation into the importance of physical space, as well as for the physical and psychological impact of artistic creations centred on space, in a time, like the one we live in, of important and continuous technological development.

This year the program was yet again rich with interesting events, but we at Digicult wanted to focus out attention on a particularly interesting artistic presence: Jacob Kirkegaard. A Danish sound artist who got his training at the Academy of Arts and the Media in Cologne but who now lives in Berlin, Kirkegaard explores the dimensions of sound with a creative and scientific approach. His work concentrates on the aesthetic aspects of resonance, of listening and the sound phenomenon per se, through research on the potential of sound hidden in physical spaces or external environments.

In this context, Jacob Kirkegaard for example has worked on sounds collected at volcano sites, from atmospheric phenomena, ice, deserts, and nuclear plants. He often uses specific electronic equipment for his recordings, such as accelerometers, hydrophones, and electromagnetic receptors. His artistic exploration is therefore directed to the discovery of the quintessential sound object – sound  and its latent and internal potential, that is revealed in order to show all the expressive and acoustic aspects of it.

Some of his beautiful creations and his works have been exhibited at main international artistic locations such as the Club Transmediale in Berlin, the James Cohan Gallery and Diapason in New York, and the Museum of Jurassic Technology in Los Angeles and the Museum of Contemporary Art in Denmark. Kierkegaard has also collaborated with artists such as JG Thirlwell (aka Foetus), Philip Jeck and Lydia Lunch.

At the Sonic Acts XIII in Amsterdam, Kirkegaard presented two works that were particularly interesting for their concept and the artistic results obtained. The first work in the program was Sabulation; this was audio and video footage of the so-called “Singing Sands”, developed in the Oman deserts and that ended at the beginning of this year.

The second work presented was Labyrinthitis, an interesting and paradoxical work for the fact that what is listened to in the installation is the listener’s own ear. A kind of “meta-listening”. The human acoustic organ is in fact not just a passive means for listening and reception of what comes from the outside, but also generates its own sounds that Kierkegaard recorded and “played” as if it were a musical instrument. An interactive creation, Labyrinthitis was created in 2007 and commissioned by the Medical Museum of Copenhagen.

Due to Kirkegaard’s participation at the Sonic Acts XIII, I met the Danish artist for an interview where we discussed the role and meaning of his work in art, and particularly sound art.

Silvia Bertolotti: How do you choose the places and sound phenomena for your work? Is it the kind of sound or physical place of sound that strikes you?

Jacob Kirkegaard: The two things hang together. As for Oman for example; What is the sound without the dune in the desert? And what is the desert without the booming dune and the singing sands? Great sounds could be found just outside my door. And in a similar way there are many beautiful places on earth. But when these 2 things come together; a sound of an abandoned room in Chernobyl, or a tone inside my ear then a 3rd thing can occur

Silvia Bertolotti: Do you agree with the term “sound art” to define your creations? Or do you prefer to avoid associating any label to your work?

Jacob Kirkegaard: Genres are not so important for me. Because as soon as I define my creations I feel limited. On the other hand definitions can help break them. However I definitely like the term sound art. I believe that it is an art form in fast development and it seems that it is becoming a more and more respected art form in the more conventional galleries. But since I also work with video, photography, performance and music I like just to define myself as an artist. My primary focus is on sound, to visualize and materialize it.

Silvia Bertolotti: You just referred to your working with photographs, video and performances: what is the exact role of these expressive languages in your work with sound?

Jacob Kirkegaard: Sometimes another medium complements or adds an extra dimension to the sound. Like in the desert I felt that the moving sands visualized the sound in a very meaningful way. Also because, a part from my job as writer I’m also part of a musical duo that works on field recordings/electronic music with reading texts and we just realized a work based on the desert!

You once said in an interview that: “Pierre Schaffer and Walter Rutmann made you think of the world as a musical instrument”. What therefore is the role of the artist? How does he create his sounds? I mean, is the artist a composer or listener?

Jacob Kirkegaard: The artist is the interpreter. Just like an artist painting a landscape; he paints what he sees but when you then look at her or his painting what you see is not just the landscape but it is the artist’s interpretation of it. The artist is the medium. The world goes through us – we can choose to let it pass or we can paint it, record it or whatever and then re-present it in our way. I am interested in tracing the unheard sounds around me, revealing them and saying “hey listen to what I hear”.

Silvia Bertolotti: What therefore is the role of the final listeners? How does the acoustic experience of the artist differ from that of the listener?

Jacob Kirkegaard:To me it is important to leave a part for the audience. I don’t wish to dictate with my sound. I’d rather suggest.

Silvia Bertolotti: In listening to the world-instrument and the sound of nature, what is the role of technological instruments that you use? I mean, you are an artist who explores the most internal part of phenomena of places, giving them space for self-expression. But you use devices such as accelerators, hydrophones, acoustic microphones. What is the relationship between the sound object and the technical instrument?

Jacob Kirkegaard:The equipment I use is the medium – just like me as an artist. The way I choose and use equipment are my decisions which then shape the work. Say, if I had used five loudspeakers in Chernobyl instead of just one the work would have sounded different. The matter is the message, right? On the other hand if I hadn’t used any loudspeakers in Chernobyl I wouldn’t have been able to create my work at all. What I mean about letting the sounds speak by themselves is more that I am interested in listening in different ways (or with different ears – equipment) and wait and see how the sound will unfold. An iron fence that vibrates, resonates and generates different tones because of the wind for example.

Silvia Bertolotti: At a more general level, what is the relationship between sound and music? And starting from that, how is your creative process developed?

Jacob Kirkegaard: There is no such thing as just sound. I think that sound is something objective whereas music is a subjective feeling. So any sound can be music. It depends on the way we are able to interpret the sounds around us. So for me my explorations start when I feel that there is a potential link between a story or a concept and a sound that is interesting to me.

Silvia Bertolotti: I just wanted to know which is basically your creative proccess. I mean, you start from the souns in itself and the how do you “interpret” it? Which are you creative phases (listening, recording, editing, do you have a main concept at the beginning or it develops with the work..etc).

Jacob Kirkegaard: It usually starts when I hear or read about a special sound phenomenon. Like for example the “Singing Sands”. It sounded so mysterious that I immediately began fantasizing about how it would sound like. Then I decided to go find the sound. When I was then in the desert I discovered that the sound was different from what I had imagined but nevertheless very interesting. Being there shaped the more concrete idea of how to create the work = what do to with the sound. To my surprise I also discovered the visual aspects of it and decided to return with a video camera. So it is kind of a back & forth; I get inspired to investigate something which then in return challenges me.

Silvia Bertolotti: How did you choose the works that you will present at the Sonic Acts Festival in Amsterdam? Is there a connection between Sabulation and Labyrinthitis?

Jacob Kirkegaard: Those two works are just my most recent larger works. Sabulation was shown for the first time last month at Club Transmediale in Berlin so it is still a very fresh work. And the curators of Sonic Acts insisted on including Labyrinthitis as well and I’m very delighted to show both works.

Silvia Bertolotti: What are your plans for the future? Are you working on something in particular?

Jacob Kirkegaard:I’ve various projects; installations, music and travels. Next month I’ll be in Ethiopia to collect sound for a Danish film project. In march I’ll create a sound installation for the KW – Kunstwerke in Berlin. Over the summer I’ll be working on my first permanent art piece which will be created for and integrated into the new University of Copenhagen. I’ll also be remixing some music, doing some concerts together with Lydia Lunch, designing a listening space for Roskilde Festival and in autumn I’ll be in Japan to exhibit Sabulation among other things.