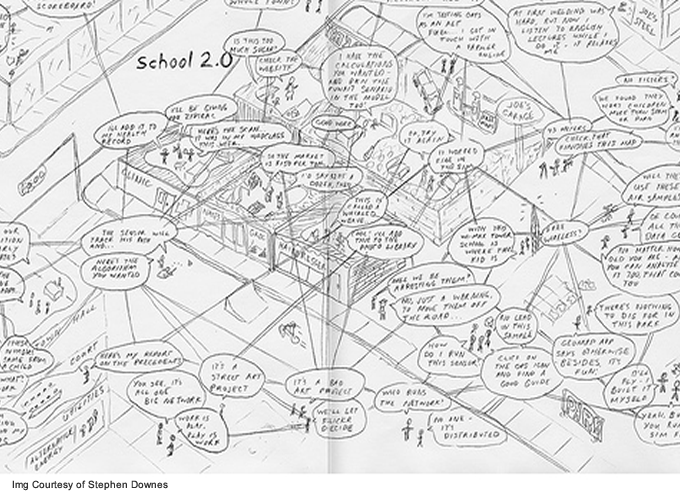 “A property of one entity must lead to or become a property of another entity in order for them to be considered connected; the knowledge that results from such connections is connective knowledge”. This is the epistemological principle of connectivism about which George Siemens  connectivist theorist at the Manitoba University  talks about in his book titled Knowing Knowledge (Knowing Knowledge – George Siemens, 2006).

The connectivism is based on the concept that learning is a network forming process, founded on the principles of diversity, autonomy, interactivity and openness. It promotes a holistic approach that evaluates the broadest spectrum of points of view liked to knowledge: it considers knowledge as the result of an interaction among members involved in the learning process and is based on a mechanism which supposes an open system, disposed to comparison and interaction with different perspectives.

The digital evolution has brought essential changes at social, political and cultural level which involved also knowledge and learning that began to play a fundamental role in our information era. The study of the implications that the passage from capitalism to a knowledge society meant for the educational world, as well as for the teachers and students’ role is essential in this moment in order to make the learning process coming into a line with the needs of our continuously changing society.

This is right the aim of connectivism as Siemens himself asserts: “Connectivism is a theory describing how learning happens in a digital age. (…) How does learning change when knowledge growth is overwhelming and technology replaces many basic tasks we have previously performed?” 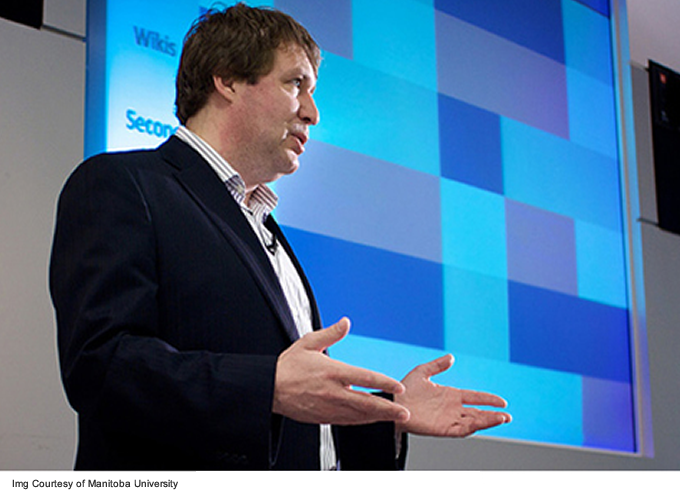 The 2.0 web with its democratic, open and social structure highly contributed to the learning change, making this process active and interactive. We are in the co-creation and content condivision era, thank to forums, wikis, blogs, social networks. To keep thinking to knowledge and learning as ready-made products is quite obsolete in this context. They are rather constant processes in everybody’s life and they both result from connections: “The connections that enable us to learn more are more important than our current state of knowing.”

Social tools in this environment become therefore sense making spaces. Taking again cue from George Siemens‘s words: “Individuals who read blogs often rely on feed readers (aggregator software which “visits” the blogs an individual has subscribed to, and returns any changes since the last visit). Feed readers permit individuals to follow dozens (even hundreds) of blogs. While the blogs selected are important to the reader, the real point of value rests on the creation of a personal learning network. The aggregated network of blogs and other news sources is the key element in learning  a framework for participatory sense making and network filtering (Image 12) – not the content experienced at a particular time”. (Handbook of Emerging Technologies for Learning – George Siemens & Peter Tittenberger – March 2009).

In light of these changes, what will be the future of education? The dynamic approach to technological evolution will be essential because it is the result of the awareness that the tools used today in the learning process may be no more valid in the future and therefore replaced by more innovative ones.

The teacher’s figure will probably assume the more democratic role of “learning curator” and will acknowledge students’ autonomy but at the same time understand their frustration in exploring unknown areas without maps. 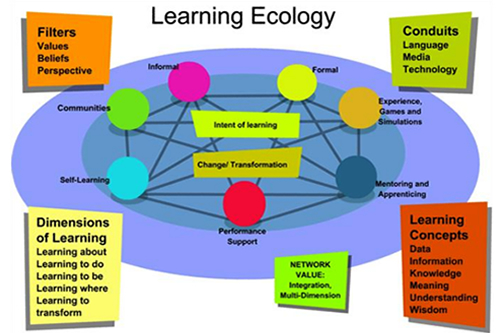 A curator is an expert teacher who instead of dealing out knowledge, creates spaces in which such knowledge can be created, explored and connected, replacing therefore the old concept of a class pivoted around the teacher, as again the American theorist suggests: “While learners are free to explore, they encounter displays, concepts, and artefacts representative of the discipline. Their freedom to explore is unbounded. But when they engage with subject matter, the key concepts of a discipline are transparently reflected through the curatorial actions of the teacher.”

The concept of class itself will seem rather artificial in comparison with the concept of a network that formed naturally, as suggested by Stephen Downes, researcher at the National Research Council of Canada, affiliated to the Learning and Collaborative Technologies Group, Institute for Information Technology and editor of the newsletter OLDaily, which specializes in online learning, new media, pedagogy and philosophy: “So there’s pressures towards using our natural connections to engage in collective learning, more than to move into an artificially built classroom that, even if it might have been an efficient tool in the past, it only seems now to be perpetuating relationships of power between teachers and learners.”

(Stephen Downes: The Future of Education).

Last but not least there will be more and more opportunities of free access to educational responses. Some significant steps have already been moved towards this goal thank to the creation of the OpenEd community, which exists for some time also in Italian version: “The Italian version was created as benchmark to widespread the concept of open education and above all in order to promote the diffusion of open educational resources (REA – OER in English). Through the wiki we will try to share experiences, ongoing projects and events that can be of teachers and researchers’ interest. The community will also deal with content translation from English in order to promote the diffusion of such concepts of open education”. 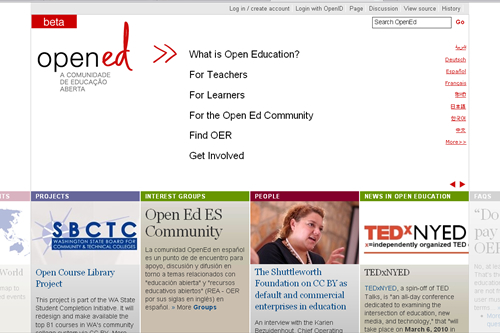 Eventually the new awareness of this dynamic context in which knowledge and discussion develop, involves also public institutions whose function will be finding the right balance between ready-made education (we have been always accustomed to) and the informal one resulting from a daily learning experience. They will also contribute in granting and supporting the free flow of resources. Here again Stephen Downes’ words (Stephen Downes: The Future of Education): “The role of public education institutions should be, in the end, to promote this free flow of resources. To guarantee access to the public good that is digital content and media as the language of interaction today.”