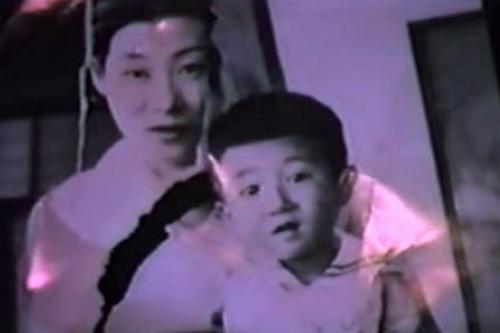 There is a story which is divided into two parts like two consciences which interlace with each other, fading into each other and embracing each other. Shuji Terayana, a person with close connections to the theatre, a poet and a person involved in the avant-garde film industry on the one hand; Shuntaro Tanikawa, a poet on the other.

Video Letter is a story about an exchange, about a passage between identity and image, between screen (the video caption in the title highlights it) and biography. Between 1982 and 1983 Tanikawa and Terayana decided to exchange some visual letters. They recorded some private video-tapes in which they compiled personal images, memories, words, newspaper cuttings, notes and small pictures (Polaroid photos and snapshots), both of them as sender and receiver at different times.
There are no dramaturgical rules in this exchange. Their video-letters are part of their daily life like everyday gestures; these video-letters are extracted from their conscience; they are fragments of images and realities which, once joined together, form a pyramid of identities at whose peak is the fleeting, sovereign video.

The conclusion of this exchange coincides with Terayana’s death. From that moment onwards, Tanikawa started correcting the editing of these “letters”. He made some changes to the sound track and closed the circle which had begun with the sending of the very first video.

When Video Letter was being created, video itself was in the middle of its own experimentation. American and European artists were transforming their actions into analogical sequences, into repeatable and diffusible instances. Diffusion and reproduction, in fact, are two of the passages which manage the interchange of information and they are channels within which communication is realised and can be developed. What Tanikawa and Terayana did, which seems to be something modestly narcissist, was to let art enter the interstice which precedes the intimate meeting of two people. The late French critic Raymond Bellour’s words left us the greatest exegesis (critical interpretation) of Terayana and Tanikawa’s work.

Raymond Bellour said that Video Letter has four qualities. The first of them is based on the question “who is speaking?” Who is it, Tanikawa or Terayana? “ In spite of the simple interchange sender/receiver which is always observed in all the 16 Video Letters, the perception of the difference between the two identities fades.

There are parts of the video letters in which the image, the fragment of life, a picture, a newspaper cutting does not allow you to understand who is recording that object, that word, that voice.

Probably Bellour was thinking about this book (published in 1977 in French, ten years before the article) when he wrote about Video Letter. What is more surprising is that the collective effort realises itself so clearly in a video whose objectivity is so explicit. The collage by Tanikawa and Terayana is able to sidestep the specificity of the medium and face a generative process.

The second quality of Video Letters refers to the identity and the signs which we see as a sole trace. “Am I an invisible man?” Terayana asks himself What can be seen of our identity from those objects, those pictures and those images which appear and disappear on the screen, through it? We identify ourselves in those two agents on the basis of their experiences, (we do not know anything about them but we are free to interpret them, to stick to our “first” impressions) of their memories which become signs on the screen, or better, “signs scattered like sand , which float between pure contingency and some stopovers” (Bellour)

The third quality moves in the territory of semiotics. Where do Terayana and Tanikawa come from? In particular, where did they met? The territory where they meet each others seems to be that body of image which they have composed together. In the video words spread out; they investigate their own sense (which is random). First comes the sound, then the object. Finally the sense, which is crucial. All these can exist in a sole body, tied to 2 minds which materialise their communication in a unique territory, a space between two opposite poles which are intimately fading into one another.

Bellour put the element which is missing, the substance, at the end of his criticism. “The 4th great quality of Video Letter is that it effects a fusion between the expressive media which is the same kind of fusion (and confusion) of the one which takes place between the methods of image and he who enunciates them. The media of Video Letter are Photography first of all conceived as the way through which memory reveals itself and, above all, as the pre-eminent object of communication. Photography reminds us of who we were; that sometimes words are far from the images they refer to, that we need to see things in order to be reminded of them, in order to let old times come to the surface and moments become blurred because lost in time.

Terayana shows some pictures of his mother, young and beautiful. He shows her as every child would do, remembering his mother. Right after he shows the same lady old and dying. So, memories become evidence of something which passed maybe too fast (like turning over the pages of a picture book of memories, a gesture so lacerating and full of dignity).

Bellour suggests that we should look at photography as one object in a world made of objects, as one sign of a world made of signs. We do not have to stick to its ontology, but to look for its participation in this universe made up of signs. The greatness of Video Letter is inside this crossing of “bridges” (a last loan from Raymond Bellour),. It lies between language and image, where everything seems to be hybrid, vague, somehow uncatchable but which is born again in this uncertainty which, in a mysterious way, makes everything more real.