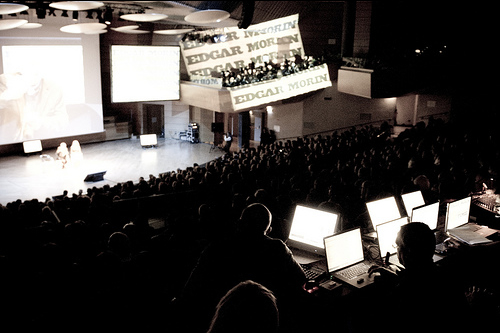 To meet Monsieur Morin is not something to be taken lightly. Even those who do not know him could not but be fascinated by his old Frenchman-like elegant ways and his ringed fingers. And I believe in his success. The husky voice with which the Monsieur expresses himself, never as an intellectual but more like the chief of a tribe who tells myths and stories, immediately creates empathy and takes you into an intellectual dimension with layered dimensions: that of complex thought. And it is immediately clear that complex thought, in the presence of the old philosopher, is not just a mix of methods, an intellectual practice, but the exercising of an existential operation, a human opening that has this objective: to give itself a new founding ethic, the ethic that a planetary consciousness needs.

On the 11th of November Edgar Morin sat in front of an audience of over 2.500 people, held in the Teatro Dal Verme, for the conclusive meeting of the Meet Media Guru 2009 event, directed by Maria Grazia Mattei. The event created much interest and was a unique occasion to get to know themes of a great adventure about knowledge directly from the horse’s mouth, that of complex epistemology. (http://www.meetthemediaguru.org/index.php/11/edgar-morin-evento-11-novembre-video-dellevento/)

Edgar Morin, now an 88 year old, is certainly one of the most interesting intellectuals of the last 100 years. Director of the Cnrs (Centre national de la recherche scientifique), president of the agency for the Culture of Unesco and an honorary academic in more than 15 Universities worldwide, his has dealt with sociology, ethnology, anthropology, cinema, TV, old and new cybernetics, system theories, pedagogy, the research of the method capable of taking apart the various disciplines and reaping the challenge of complexity. An anomalous intellectual that is difficult to categorise and is politically engaged, Morin has earned himself the nickname “Undisciplined”, also the title of his biography, a collection of his adventures, which was released in France this year and signed by Emmanuel Lemieux.

The French philosopher and sociologist began his trip in “complexity” after staying at the Salk Institute in La Jolla, California, in 1969, where he elaborated his own particular epistemological vision through his studies, that is based on certain fundamental media assumptions combining general theory of systems, cybernetics, theory of information and neurophysiology of autopoiesis of the living (second cybernetic), integrated piece by piece through their combinations with various disciplines of knowledge.

A few cybernetic theories in particular (see the previous article), as Morin often reminds us, gave the philosopher the key to gain access to complexity: among these, first of all, was the concept of retroaction, that with the cybernetic consideration of machine as a system capable of self-management, sent him on the path to a definition of the living constructed through multidimensional thought capable of involving the humanist and scientific sphere. So in Morin’s discussion biological complexity of the human mind becomes inseparable from cultural complexity, so that culture itself is an indispensable part of biological evolution. Morin became the “full” theoretician of l‘unité de l’homme as well as the unification of all disciplines.

The French philosopher’s discussion, which can be interpreted as a method of complexity, calibrates some if the ideas that we could describe as his fundamental theories that we will keep finding on more levels of his interpretations: the principle of the hologram, the recursive principle, the dialogic principle as well as the consideration of a multidimensional subject that has never been disjointed from its context and has been integrated into the explanation of the phenomenon. Today the phenomenon will not, according to Morin, be purified of its disruptive elements like disorder, uncertainty, and risk. Integration and the relationship between antagonistic concepts will consequently be essential, one of which is the most dear to Morin and is autonomy-dependence. In other words, a slap in the face to reductionism, determinism, and tradition.

But let’s come back to the present, to Monsieur Morin’s conference at the Dal Verme, which will help us to understand some passages of his thought processes that we presented in a brief summary.

Edgar Morin is currently directing his attention to the ecology and the promotion of a new ethic, proposing a political ecolo-sophy in his latest books and in the public debate that should be adopted in order to create a planetary transformation. His intervention in Milan was targeted at the presentation of his “complex” ethic that has the Hologram principle at its base, as well as the recursive cycle of “human trinity” and the cohabitation of antagonistic principles. Getting out of individualism and ego-centrism, is possible by following these three paths, which not only represent the interpretative keys but also the expression of his intrinsic wisdom capable of directing people toward solidarity, the communion of living beings, united in a circular chain of life and death.

What is the Hologram principle? It’s is merely the overstepping of the illusion of retaining ourselves disconnected to the chain of life; the overstepping of the illusion that we are dominators of objects, of a res extensa outside the investigating subject. Exactly like in a hologram, where every single part experiences the totality of being together, man must never lose sight of the awareness of carrying the history of the entire universe within himself, and must never stop knowing that every I carries a WE inside it.

According to Morin the passage of life is circular and recursive. Just as human beings live the same circle of divine trinity, every man is an individual, part of a society and part of a species, but not in the sense of a hierarchy, but more like the consideration that every single part of the process is the cause and is also the successive effect, and the preceding effect. Within the species, man is the product and the producer, like every man is a father but also a son and so on. It’s indispensable to find a sense of totality, but also to find an importance in specificity, which is the expression of totality on a small scale, just like an embrace that integrates contradictions, disturbances and antagonistic aspects. And Monsieur says it clearly: “an ecological thought is necessary but can never be sane if it does not accept its own insanity”, so homo sapiens is also demens, and homo faber is also homo mitologicus, homo oeconomicus must also be homo ludens.

To think in a complex way means to feel part of a unique and great community, inside a great recursive cycle of life. It means being planetary citizens and using all of this as a possibility.

Now we have come to generate, on a technical basis, the most efficient metaphors of the living, like the metaphor of interconnection, and this has happened through the production of one of our most recent extensions: Internet. The web, through its cerebral network complexity, its connective intelligence and cultural skin cannot but be the possibility of favouring the growth of a planetary consciousness, which is the consciousness of being a part of one homeland, which the philosopher states is the only way to face vital problems of our times.

Going back to the first statements of this article, meeting Monsieur Morin is not just an opportunity to meet the theories of a new epistemology, but is the possibility to understand that every new epistemology inevitably opens up to a new ethic, and this is the responsibility that every scholar and every citizen who decides to follow these paths indicated by a new or old theory of knowledge, must feel.

Personally I like this ethic, just as I like the last words of Mr. Morin with which I will conclude my piece: “love is the only authentic religion of hyper-complexity” (Edgar Morin)