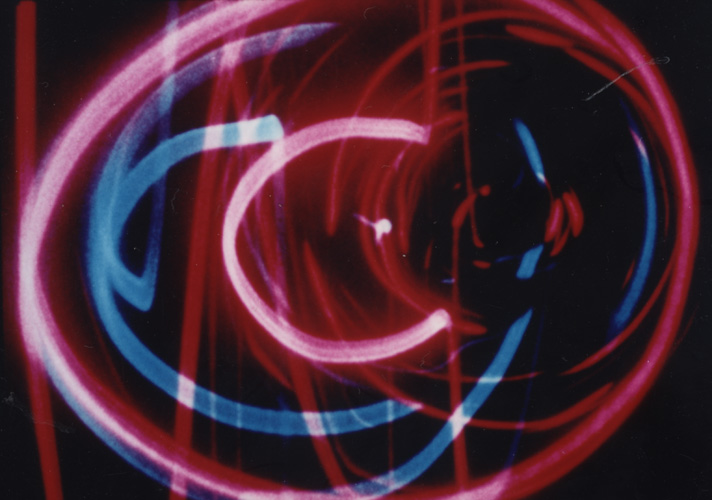 At the beginning of 2009 for the first time the exceptional screens of IFFF – International Film Festival Rotterdam presented the film #37, the new experimental creation of the Dutch author Joost Rekveld (1970, Terneuzen, Netherlands), which achived a great success both from the public and the critics point of view thank to his poetic intensity and visual beauty.

This work of art is not only a simple short for the visual and perceptive pleasure, but an experimental and research production which derives from a scientific and philosophical approach to nature and technology. Joost Rekveld’s great experience comes from its endless personal research  the fundament of all his productions, from experimental films to light installations  as well as from the high knowledge of the experimental cinema and audiovisual world acquired thank to many cooperations as editor inter alia with the Impakt Festival of Utrecht, De Balie, the ancient cinema in Amsterdam, the DEAF Festival in Rotterdam, the Belgian Filmmseum in Brussels, the Independent Film Show in Naples.

Rekveld’s first experimental films date back to the early 90s and they all (with only some exceptions) have a title linked to a numerical succession. Already from the name of this work the reference to maths, algorithm and science is clear. From the 16mm IFS-film, produced between 1991 and 1994, Rekveld has developed a computerbased project, which examines through the experimentation of pixel disturbance forms the animation world which looks for pure geometrical forms, concealing the originary nature. #3 is another 16 mm film dated 1994. It anticipates the developement that Rekveld’s works would have had in the years till the nowadays productions. It is a film of pure light, where images come from the recording of the movement of a slimline long exposition light that allows tracks to be left on the emulsion. In Rekveld’s work of art, science meets visual poetry and music reaches a sublime realization. The 36mm film dated 1999 and titled #11, Marey Moiré, is a wonderful awoval of love by the author to the discontinuity of the medium cinematic world. In 2000, through this work of art made of total colours and movements, Rekvled won the Grand Prix for not narrative animation at the Holland Animation Festival in Utrecht. The same year he won a price at the Sundance Festival, maybe as best Dutch film to be projected.

From 2008 Joost Rekveld works as director of the ArtScience Interfaculty of the Royal Conservatory and Royal Academy in The Hague. Rekvel’s research is the subject of the following interview. It goes towards study lines in the field of optic, mechanic and robotic in order to reach an atheist esthetic, free from spectacularity and seizure attempts.

Silvia Scaravaggi: Visual music for the eye. What does this definition mean in your work? When did you start and how has your research as artist developed in time?

Joost Rekveld: I started making films after I saw a couple of experimental films that made a big impression on me. At the time I had been reading about experimental film and colour music, and I found out that the only way to get to see these works was to start organizing screenings. For a couple of years I was one of the curators of the Impakt-festival in Utrecht (which still exists), and for the first festival I helped organize in 1990, I invited Elfriede Fischinger and Bill Moritz to come and show an overview of the history of abstract film.

The films that really impressed me were especially those made by James Whitney. He started making films with his brother John, and those early films are very much inspired by the principles behind serial music. But his later films go beyond that direct inspiration and his work becomes something else. When I started to make films I was studying electronic music and computer music, so I also started composing my films in ways which are very similar to how a composer would compose a piece of electronic music. But over the years I’ve moved on to something else too; i’ve become much more interested in our relationship with machines, and in ideas that relate to light. I still call my work visual music because it’s a tradition I feel close to, but i’m not anymore spending my days thinking about how to translate music in images or those kinds of things.

Silvia Scaravaggi: I would also like to tackle the subject of space: could you please tell us something about the spacial aspects of light and how do you to relate to them in your experimental films and light installations?

Joost Rekveld: When I started making films I realized that it was interesting to stay close to the machines I was using. I’ll have to explain that. I was thinking about how I could start making abstract images in my own way and I did not have money for fancy tools. It was an important discovery for me that taking film camera’s apart and modifying them, or starting to program computers on a machine level actually gave all kinds of interesting results that were both efficient and elegant uses of technology.

Because of that I also started to think about the principles behind this technology, for instance the idea that we can only have power over things by chopping them into little bits; first movement was captured in a series of still frames, later in a series of scan-lines, and now we have pixels or bits.

For later films I started to become interested in the history of perspective and optics, especially renaissance and medieval ideas about the propagation of light and how that relates to concepts of space. And often these works were inspired by old techniques or experiments. For instance I made one film (#23.2, Book of Mirrors), in which all images are produced by the interference waves of the light directly on the emulsion of the film. That was inspired by the work Francesco Grimaldi, a scientist from the 17th century who discovered the diffraction of light. For that film I did not use traditional optics, but I made my own machine in which light diffracts and percolates through small slits and holes.

When I was thinking like that about light propagating through space, it became logical to make light installations in which the audience can be in the light. Also I collaborated on a number of theatre productions, for which I design the theatre lights, projections, or sometimes light installation. A dream I have is to make a small colony of luminous, autonomous robots, and for these theatreprojects I can sometimes work towards that idea. The next project will be for dance company Emio Greco | PC, for which I will make a kind of robotic light architecture.

Silvia Scaravaggi: Could you please tell us something about your last film #37. How is it built and what are the concepts at its fundaments? Where will it be projected in the next months?

Joost Rekveld: #37 had its premiere last february at the International Film Festival Rotterdam, and it is now being shown at various festival and venues all over Europe and the VS. In some ways ity is a continuation of my research into what happens when light passes through matter, but this time that idea was an inspiration for developing my own software. At some point I saw images made by crystallographers, who were simulating what happens when x-ray waves shine through a crystal. You get these very beautiful interference patterns, and I became interested in them when I found out about quasicrystals. These are certain type of crystals that have symmetries which are not regular when you look in detail, but seem regular when you look at the whole image.

To make the film I made a kind of computer simulation of molecules trying to form a crystal together, but I keep changing the laws of physics in their universe. The film for me is about these kinds of ideas of self-organization, and the idea that crystalline structures are somehow in between the mineral and the organic. That is a very old idea: some greek thinkers thought that stones were sexually reproducing themselves, people have always noticed that crystals look as if they have grown, because they have veins. Now this idea gets a new kind of relevance if you think about articial life or nanotechnology.

Silvia Scaravaggi: Simmetry, beauty, sensual experience: what importance do these concepts have in your job, if they do, and why?

Joost Rekveld: I think I am oldfashioned because I want to make beautiful films, but I also think that beauty is not something static. I want to find the beauty, or humanity is perhaps a better word, in the technical principles that are part of our culture and with which we surround ourselves. Beauty is traditionally associated with symmetry, and sensual experience is often associated with repetition and trance, but I’m not interested in those things. I don’t want people to lose themselves in some kind of ‘higher’ experience. I’m a radical atheist and I think that goes together with a preference for asymmetry and non-repetitiveness.

Silvia Scaravaggi: You are now working at your next film, #47; how is it developing?

Joost Rekveld: It is slow, I am trying out a lot of things having to do with networks of pixels that can evolve. I’m still exploring, reading a lot and figuring out what it is I want to do. I want to try and make a film or installation in which moving images are the result of some kind of simulated evolution. I’m certainly not the first to do that, since there are already many artists working on that. I don’t want to use evolution just as one of the possible ways to generate complex images. Also I don’t want to make a work that tries to show how evolution can generate all these incredible things. I want to make a program that makes beautiful films in which you can follow a process of growth. I want to show how a world can grow out of the constraints of a system. I’m sorry it is still so vague..