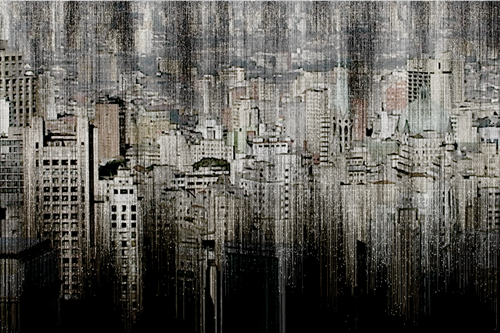 This festival has been created as an event focussed on vjing as well as audiovisual and electronical culture. Nowadays it seems focussed on the “widespreaded event” model (as it happened for the last edition. See our report on Digimag 40 in December 2008-January 2009 titled “Cimatics 2008, not only vjing” – http://www.digicult.it/digimag/article.asp?id=1325), which involved most realities of Brussels acting in the field of the new media.

From 20th to 29th November, a series of screenings, performances, conferences, meetings, workshops and live music evenings animated the Museum of Bozar Modern Art, the Beursschouwburg (which hosted the 2007 edition), as well as the Imal centre, the concerts and performances venue Les Brigittines, the medialab MediaRuimte (managed by LAB[au]), the social centre Recyclart, the most famous city club Fuse and even the Atomium, the building which more than any other represents Brussels landscape.

The choise to base the 2009 edition right on the interaction between different production and research entities of the city became a fundamental of the Festival, led by Bram Crevits e Nicolas Wierinck. The Festival subtitle has therefore been strategically changed into “Citywide international festival for advanced creativity”. The vjing fades away as well as the live audio videos and the public is captured by the desire to shoot a snapshot on the most experimental researches of contemporary time.

This is so true, that next edition  and this was confirmed by Bram Crevits too  will have in its subtitle right this word “contemporaneity”. In my opinion this is a very interesting sign about the fact that focussing on the new media in 2009 maybe nowadays do not have so much sense. It is enlightening therefore to remember that right at the end of Cimatics  from 1st to 3rd December  the community met in Eindhoven in the newly-born Baltan Lab and discussed about the future of Media Lab. It means that the instances of jocose research, experimentation and self-assertion of these realities have reached a point where they must stop and ask themselves what is their sense, aim, relationship with art today and what economic strategies they have to use to survive and find forms of research cooperation and condivision in order to avoid the risk of closure and involution.

During the years, Cimatics has evolved into an organization which not only organizes and manages festivals, but also acts as producer. Cimatics has therefore become a platform to collect and display works of art linked to audiovisual experimentation, but above all to follow its production phases (from financing to sponsoring).

Ryoichi Kurokawa’s and Debackere brothers’ last projects are included in this new planning quality. The installation titled Vector and signed by Boris and Bresch Debackere  internationally known for their previous performance of live cinema Rotor  was previewed in its creation phase at the Festival opening. Kurokawa’s last audiovisual concert Rheo was instead previewed at Bozar, during an event featuring also Ulf Langheinrich and his last work Land, an audiovisual 3D performance.

The performances followed eachother during the same evening and had as common denominator the re-production of wide more or less natural landscapes. For the Japanese artist (living for one year in Brussels as student attending the post-master course Transmedia), the meeting with this landscape (natural and metropolitan) is purely esthetic: a set up of three screens placed vertically shows audiovisual sequences in which the elements emerge slowly from a rendering which made them abstract. Rheo is a very endearing work and the word you can hear the most after the performance (very appreciated by a specialist but also lay public) is “wonderful”. And really the sequence of waterfalls, mountain chains, deep seas, vertical and overbuilt urban spaces are a wonderful spectacle. However the doubt remains that there is not so much liveness in this work, which seems to have been organized as a projection of three previously arranged and rendered videos, accompanied by a sound on which the artist operates live.

The same can be said for Ulf Langheinrich: where is the live element of the performance? The show Land is anyway a wonderful spectacle (maybe too long), in which nature appears in front of us as an obscure and threatening world, which selfgenerates in many different ways  form a deep ocean to a Star Trek sky  which suddendly extends over the public thank to the power of 3D. An audiovisual trip spiced up with stroboscopic lights and deep basses.

The audiovisual performances have been Cimatics 09 strenght. In the deconsecrated Church of Brigittines  today renewed as multi-cultural centre  two successive evenings linked to the audiovisual world presented all the other works of art: from Telcosystems, to Herman Kolgen and Ogino Knauss. The Dutch trio Telecosystems – Lucas van der Velden, Gideon Kiers and David Kiers – (the animators of the Sonic Acts festival in Amsterdam and of the above mentioned Baltan Medialab in Eindhoven) presented Mortal Electric, which had already been shown this year in Berlin during Transmediale. It is a dense performance, which brings the public in the innards of a machine to experience its functioning. The sound is maybe the most intense element of this work: it makes the space tangible, the air almost full of sound waves make the public vibrate and attack the aural organs. The question about this work is not whether you are watching a video play or a generative performance: it is a pure physical experience.

The so long waited video by Herman Kolgen (who dedicates to advertising and HD videos after almost 10 years of activity with his partner Skolz Kolgen), Inject, co-produced by Arcadi (the same producers of the Nemo festival in Paris and the Canada Arts Council) was made up of too many videoclips, was too long, too HD and too pretentious. The almost three-dimensionality of high-resolution images (see the realistic bubbles coming out the respiratory organs of a vaguely oriental man, thrown to drown in a container full of water: this is a visual trick that have become a standard practice in advertising videos after Bill Viola  see the Barilla pasta one) did not add anithing to this work, during which I constantly asked me when it was about to finish and tried to find any possible track of liveness.

Trains and stations, signs on scraped walls, geometrical and almost abstract pattern on hypermodern government buildings in a state of dereliction are the first output of Ogino Knauss’ research on the urban field in the European capital: the city in perpetual transformation, whose administrative centre (which includes also the luxuriant and futuristic buildings of EU institutions) is slowly devouring the residential areas and at the same time running-down. The performance is wholly based on the collective building and on a genuine live audiovisual experience in which people are sucked into the buildings to discover their rooms which are being knocked down and of which at the beginning you see only the shiny and chromated surfaces. Thousands of images gathered during the residency are organized in a sequence and assimilated to live sound, while a voice tells about expectancy, running-down spaces, city identity.

Besides the audiovisual performances, Cimatics also organized in a networking the theorical events of the festival week. The two days Video Vortex  created by Geert Lovink who brought from Amsterdam his students to hear a goodly number of specialists of video and networking  opened the festival at the Atomium (the most extraodinary but underestimated work of urban design of our time). A conference titled The city of sounds (featuring among the others Lorenzo Tripodi, member of Ogino Knauss and the musician and curator Carl Michael Van Hauswolff) made the already mentioned Transmedia interact with the center of art Imal.

Imal itself grabbed the chanse of Cimatics to present Chapter 1 – The Discovery, a work of art by the Spanish artist Felix Luque Sánchez, produced by medialab LABoral Centro de Arte y Creación Industrial of Gijon, which will also take part to the next Transmediale. The installation is a tribute to the classic science-fiction: a black polyhedron with lightening and sounding edges, similar to a physique alien to the Earth which landed here from another galaxy and which is waiting to comunicate with all human beings coming across it. According to the author’s intent, Chapter 1 – The Discovery should be an interactive work, which reacts to the presence and movements of people approaching it. Actually interaction is quite confused and does not really manage to reveal itself: in order to try it, the public needs to carefully read the presentation brochure, given at the entrance of the black box hosting this work.

The laboratory and exhibition space MediaRuimte led by the group LAB[au] took part to the festival with the installation 2 * 540 kHz created by the Finnish musician Mika Vainio. This work is the result of the residency in Vainio  one of the two members of the almost-former PanSonic (at the end of 2009 they are performing their “goodbye-tour”), at MediaRuimte contributed to the work creation as producer.

The idea to invite Vainio to produce and exhibit his work is linked to the absence of documents about the his artistic production. He has created in the years tens of installations although without saving their memories. 2 * 540 kHz was presented at the MediaRuimte together with a monographic book on the artist edited by the German label Raster-Noton and co-produced by the same LAB[au].

The book (texts by Carl Michael Van Hauswolff and Daniela Cascella), titled Time Examined, has been installed as a microfilm inside the gallery, in order to be explored by the public. The choise to make the visual extracts of the book usable derives from the desire to consistently accompany the installation, which presents itself as a concert for ancient radios cleverly installed in the gallery: the retro style of the microfilm goes well with the purely analogic character of the ancient radios and their warm, imperfect and low definition sound quality. 2 * 540 kHz reproduces and enlarges a former project by Vainio, operating on a radio tuner: the two compositions on different wavelenghts are played loop by two sections of radio.

Each composition is broadcasted by two little transmitters placed in the middle of the installation: each transmitter is set on a different frequency and works as an indipendent radio. The two series of radios installed as two wings on the left and on the right of the transmitters are set on the two frequencies: the composition is therefore widespreaded in the room by the radios.

According to what the organizators said in official releases, Cimatics 2010 won’t take place. The plattoform will take two years off. We should therefore ask ourselves how will things in Brussels develop in the meantime. The grey Eurpoean capital is nowadays totally underestimated in comparison with London or Paris for the art market, or Berlin, Amsterdam and Rotterdam for the avant-guarde art, or Madrid and Barcelona for life quality and investment in the cultural sector. However it seems that Brussels is becoming a gathering point for artists and producers, who are attracted there by the many organizations and cultural events that the city proposes.

A good companion in this evolution is a welfare state which carries out a sound policy of local cultural development. Thank to this situation, realities like MediaRuimte and Imal, Recyclart and Okno (but also festivals like Cimatics) can survive and gain in the years a more and more international dimension.