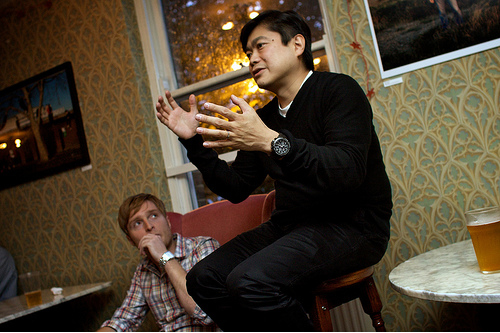 It is the talk of the moment. At meetings on the future of music (but also of publishing, cinema, television and visual arts) there is a prevailing topic: the search for new business models for creativity in the age of the digital dematerialization and world wide net; hence the meditation on the necessary changes both in the theoretical and practical approach to copyrights and reproduction.

That’s precisely why, some weeks ago, Jonas Woost di Last fm and Dave Haynes at SoundCloud invited Joi Ito (http://www.crunchbase.com/person/joi-ito), CEO at Creative Commons and, before that, pioneer of web 2.0 and investor for some of the most interesting and innovative enterprises (such as Flickr, Rupture, Dopplr, Fon, and Last fm).

The meeting was the hundredth in a series of OpenMusicMedia – http://openmusicmedia.wordpress.com/ (open door events on digital music for discussions and networking) and, like the others, it turned out to be every bit as informal (a nice pub and many pints) as interesting (besides Ito, there were experts, corporate heads and indies, artists, amateurs, journalists… all equally interested in mutual understanding and in developing cooperation strategies).

For geeks Joi Ito is a legend, but he is by now an important business personality for common people too. He is staying in London for a few days and everybody is after him. Institutions want to meet him, the Guardian interviews him. http://www.guardian.co.uk/technology/blog/2009/sep/23/joi-ito-interview-creative-commons. He, nevertheless, between one thing and the other, keeps attending meetings in pubs.

Apparently CC is the present and, apparently, this is the right time for a change: after ten years of denial, creative industries have accepted the reality of facts, namely that a r-evolution is under way and it is irreversible and, possibly, it has to be conceived as an opportunity, rather than as a hazard. Yet, it remain to be understood how they should proceed from here.

For a long time the chances for production, distribution and access to creative contents were limited and expensive on accounts of a comparative technical reproducibility. The XXI century has brought about a dematerialization of contents and the convergence of all channels/media onto a single, low-cost and easily accessible worldwide net, plus the spread of social media, which has resulted in the practice of sharing. People can choose what, how and when they want to enjoy culture and entertainment, in big quantities and at a low price. Thereby their choices have become a fundamental element of their identity and sharing a fundamental practice for their social life.

If in the analogical world – which copyright was created for – most consumers were not interested in making a copy of what they bought, in the digital world the very action of acquisition implies a copy. A word by word interpretation of the laws in this framework would therefore result limiting.

That‘s why Ito never tires of pointing out that “if in the past merely criminals committed illegal deeds, nowadays everyone of us commits a little crime every day, for instance when we publish in our profile in a Social Network a song, a sequence or an image. CC is trying to avoid this by supplying a licence that allows reuse, with no need for legal advice or a special permission to do so”.

He then adds: “Artists are increasingly interested in the attribution of their work and in the chance to grant rights for the commercial use. Sometimes, on the contrary, it is a priority to safeguard the original work, or at least having a chance to approve, or disapprove, the re-elaborations done by others. This is the age of free economy, of remix and mashup, nevertheless, in most cases creative initiatives and cooperation are not possible yet, and not on technical, but on legal and economic grounds”.

At CC they know very well that, although supports (disks, DVDs, books, magazines…) are no longer necessary and copies are inevitable, authors still have the right to have their creativity acknowledged and often the economic need of being rewarded for their work. “CC is not against the laws regulating copyrights, it supports an updating of such laws” – so Ito– “and at the basis of laws there should lie freedom of choice for producers and users alike, and the awareness that the communication and media system has been transformed”.

In this new ecosystem, the crux is not denying the need for rules, whereas finding acceptable ones, that can be shared by everyone; to allow a democratization of the processes for creation and use, an economically sustainable development, bearing in mind the target, that is contributing both to the cultural biodiversity and to the professionalism of the artist. “The promotion of a sensible legality is the most efficacious way to fight illegality”, states Joi Ito.

“CC is working with the institutions, that have always dealt with copyrights, registering success and cooperation in some areas (Scandinavian countries), coming across endless hitches and hindrances in others (USA, UK, Germany). But CC is not a lobby, it is a charity, whose only end is to supply legal alternatives to illegal practices”, he goes on.

“I don’t want to push anybody, that would be a waste of time, but I am pretty sure that the time has come. The music industry has to reinvent itself and artists will have to take up a central role again. And since artists are not merely interesting in the commercial aspect, but also in the spread of their works and the audience is more interested in discovery than possession, this relationship can evolve to great advantage for both”

Famous artists who have CC at the basis of their new way of doing marketing – that is a path, along which they forge new relationships with their fans – are Radiohead and Nine Inch Nails, and also those who appear in SoundCloud, the new and beloved music platform…

Although we still have a long way to go, Joi Ito is a prepared and resolute man, with elegant and diplomatic manners. The world of independent music trusts him and CC, plus he knows that the time has come for a change. Hopefully the world of corporate music and of the institutions can understand that too. Hopefully now.