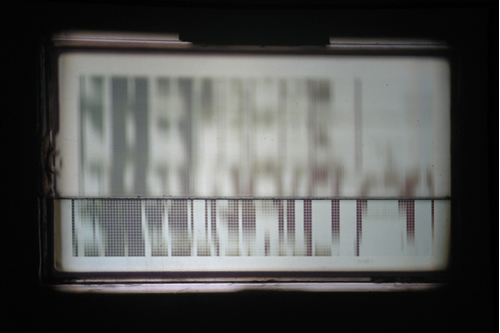 Almost Cinema celebrate this year its fourth birthday and also this year he accompanied the Film Festival of Gent, an exhibition organized by Eva de Groote, curator of the media area at the Center for Art and Culture Vooruit. As for the last editions (I visited and described it in a critical text published exactly one year ago on http://www.digicult.it/digimag/article.asp?id=1324) the exhibition is hosted in the wonderful art Nouveau rooms of the Vooruit center itself.

Once again the “Festival in the festival” proved to be a project which was worth a visit from Bruxelles. A difficult bet for an editorial project aiming at collecting works which play with the cinema and the ability to isolate some of its specific features and move them outside the screen. Environment, immersion, movement, sound, lights, images are the core principles of cinematographic illusion. Is it possible to traspose each of these elements into an installation which produces a kinematic effect on the public?

It seems the bet has been won this year too! It is quite essential and based on a project which is not so easy to full with the right works of art. Anyway it functioned! The meditation on the expansion of the concept of cinema and on the trasposition of the kinematic experience into an esthetic idea which escapes the narrativity of film language is a kind of research that has been developing for some years. In the last years, this concept has become more organic and aware, thank to the work of some artists coming from different educational experiences and approaches (from live cinema to design). The transition from theory to practice and into a convincing work which is able to express a kinematic experience is in no way easy.

Almost Cinema took place  like in the past editions  in the form of an exhibition and series of presentations. The theoric/performatic event presented in its most important evening a work of art by Baltan Lab (the new medialab funded by the Dutch Government and organized by the crew of Sonic Acts in the former research laboratory of Philips). In this occasion Edwin van der Heide‘s live performances Lsp, Bas van Koolwijk’ and Gert Jan Prins‘ Synchronator and TeZ‘s PV868 followed oneanother during a whole afternoon and were presented by the artists themselves. The main focus was the possibility to operate in a real space, live, using selfmade technologies and softwares.

The exhibition spaces were organized in a path among seven artists: Hans Op de Beeck, Felix Hess, Aernoudt Jacobs, Bram Verven, Pablo Valbuena, Juliana Borinski, Kurt D’Haeseleer & Bérengère Bodin, Jean-Noel Montagné. Their works of art were installed in the different Art deco rooms of the building. Hans Op De Beeck’s Celebration is certainly the work which attracted the most. The author was born in Belgium and has more an international than mainstream career, dotted with personal exhibitions at the main Belgian institutions (the country where he was born and lives). Op de Beeck has a classical education of Fine Arts: he studied at the Academy of Brussels, he was researcher at the Rijskacademie in Amsterdam and residency at MoMA.

In the years, he exposed his works (objects, photos, videos, installations) at Argos in Brussels, at Mukha in Anversa, in different fairs and international galleries as well as à la page. Right in one of these galleries, the Galleria Continua of San Giminiano and Pechino, he produced Celebration in 2008. It is a tableau vivant projected in the dark environment of the black box. It shows a huge banquet full of food and various decorations which is waiting immobile in the arid landscape of a mountain desert. Observing the projection, we realized that it is not a still but a sequence in which the subject is fixed and immobile. Only the sound and the slight movement of the table-cloth moved by the wind and the characters populating the scene, reveal that it is a video. All the waiters, the prepared table, the cooks are waiting in silence and watch the public. This waiting creates a relationship with the watchers, who seem to take part in this situation created by the artist.

Another interactive work is Felix Hess‘ one, which however was created in a completely different form. Hess’ story is different from De Beeck’s one. Hess is a scientist, he was born in the ’40s in The Hague and became sound artist after getting a master’s degree in nuclear physics. A typical Dutch personality (and I think in this case to another great researcher of arts, science and technology who was born and lived at The Hague and who was the protagonist of one of our Digimag past editions: Dick Raaimakers – http://www.digicult.it/digimag/article.asp?id=1396). The scientific research turned into artistic research of this kind of people certainly affected the creation of institutions such as research spaces or medialab all over the country.

Hess was well-known for his sound machines (Moving Sound Creatures and How light is changed into music are his famous works in this sense). After a long courting by the editor, he accepted to bring to the exhibition his installation, called In the Air, of 1995. The main feature of this installation is its desarming simplicity: scorse of little flags made of paper and wood are fixed on the floor. The sole presence and movement of the visitors make these flags moving and the whole floor seems fluctuating. The interactivity of this work is primitive and basic: the waves created by the visitors’ movement produce invisible changes of pressure that make the work of art moving. These changes of pressure are “in the air”, and therefore this is right the title of this work. The kinematic experience in this installation is “kinetic” in the very deep sense of the word: from Calder’s kinetism in Mobiles on.

Another work of art which is worth a discussion is Pablo Valbuena’s installation. HE is a Spanish architect and artist who works at the construction of spaces through perceptive illusion. At V2_ in Rotterdam, he became famous thank to the research on augmented reality. Valbuena studies the watchers’ perception and his physical envolvement within spaces that are generated through projected contents (or contents added by the artist).

The installation thought for Almost Cinema is part of his Extension series: his desarming simplicity together with the fact that the work of art completely and totally functions  showing to the public forms and 3D images which in reality don’t exist  make this work one of the most successful of this festival edition. A dark room is lightened in a corner by a shaft of white light coming from a video projector. This shaft of light is moving and it creates a game of lights and shadows which give or take away light to a simple, thin angled structure made of white polystyrene, and make the visitors see geometrical forms that exist only in their mind

Also Jean Noel Montagné’s and Aernoudt Jacobs’ works are praiseworthy. The first is an installation made of mirrors and lights (after the old manner of kinetic and programmed art) which react to the watcher’s behaviour. The title of this work is Je te parlerai dans un reflet de lumière (I will speak under a reflection of light). The second work of art, called Permafrost is an installation made of melting ice whose noise produces a minimal soundscape, where the public can dive.