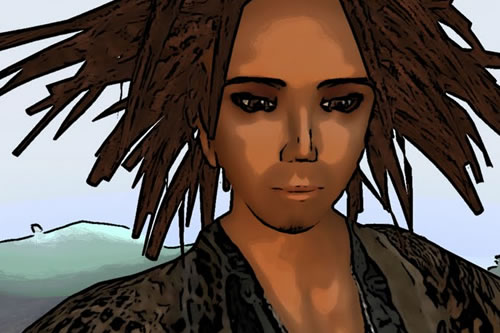 New on YouTube: the interesting preview of VolaVola/FlyMe by Berardo Carboni. A small 3-minutes sample which mixes the machinima filming technique with a cartoon effect which got the attention of famed cyber-futurologist Bruce Sterling, who defines it on Wired blog “disorienting”. Let’s see what it is about, with the help of its creator, machinima-operator Evo Szuyuan.

On Imax screen in Paris

On Digimag 41 – February 09 (http://www.digicult.it/digimag/article.asp?id=1358) we had presented this project. Its creation implies only one script but 1 identical movies, filmed in Rome and on Second Life. The script – a love story describing the aspects of contemporary life through the eyes of three couples grown in different years – was written in collaboration with virtual-worlds guru Mario Gerosa, and for its realization an open method was used: a MySpace website and a Facebook group, to invite people to cohoperate. Musics were written by Abruzzo-born MouLips, who adapted a popular song called VolaVola.

After a one-year long preparation, the Second Film is ready for its debut in Paris next November 2nd, special event at the Atopic Festival – the first machinima festival in France – with the presence of the French minister to Culture. The projection will happen on the Imax screens of La Géode, in the Parc de la Villette. For now, the machinima operator of the Second Film, avatar Evo Szuyuan – Brigit Lichtenegger in her physical body – published on her YouTube channel a preview which, as she says, is not to be considered an official trailer to the film.

The few minutes, judged as disorienting by Bruce Sterling, see the two avatars in front of their computers meet on Second Life. What looks unsettling is the use of a cartoon effect, realized with Red Giant ToonIt software. “We needed to clearly mark the difference”, explains Evo. The clou of the scene is, in fact, represented by a 360° rotation of the camera where the images of the two moments – the footage recorded in Second Life where the main characters get inside Second Life – intertwine. The special effect used, becomes then necessary to make the scene understable to a public that, as Evo says, “will have the handicap not to be expert of Second Life.

“Therefore – concludes Evo – the disorienting effect doesn’t create confusion, but is instead functional to the film, because the audience would have been looking at a “. Also embellishing the scene is the location, Gazira Babeli’s Locusolus gallery. For your information, the characters interact with two of her most famous works, Avatar on Canvas which causes the uncontrollable deformation of the avatar, and Come Together which fuses the bodies of the characters in a single sculture.

Many of the relations which are born on set are human – very human. Who animated the avatars felt embarassed sometimes to shoot naked or sex scenes. The cartoon effect created by Evo, somehow worried Stella Costella and Honey Fairweather, the two avatars who cured the set and costumes: this artifact heavily covered most of their work.

In Evo’s opinion, many of the duties of a machinima operator are similar to those of a normal cameraman. Having said this, she doesn’t have any experience in this field, and she confesses some embarassment to shoulder a camera since she is not at ease in front of the subjects of the shooting.

For machinima, some instruments used for the shoot are – banal as it may seem – joystick and a certain ability with scripting, at least in this pioneering phase where competences are not clearly divided yet. The characters moving in the movie are animated in real time, and directed by a director. Second Life, thanks to the account exchange, allows the same person to animate mor avatars, for example in case one of the animators is not present on the set.

Scripting, in Evo’s opinion, is close to the animated cinema experience. The almost 3 minutes on YouTube costed 4 work days, also because part of the previously prepared material got lost due to a computer breakdown. Evo’s favourite machinima film is Ballad of Black Mesa, and a part of the VolaVola/FlyMe set was reused to renovate her space’s furniture on the Odyssey island, one of the most important spaces in Second Life dedicated to arts