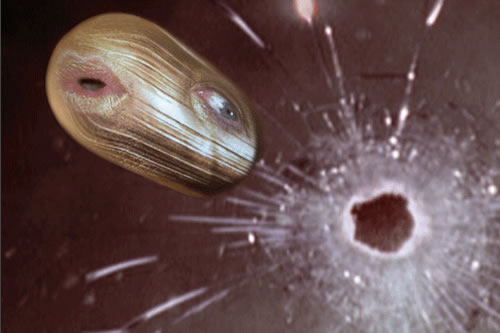 Tony Oursler is one of the most internationally renowned multimedia artists, born in 1957 in New York City, where he lives and works. In the eighties he began to make short videos, and later he began to design installations where he set sound and video. Since the nineties the use of mannequins became a constant feature of his work, puppets and dolls were the stars of his installations.

He was member of a rock group, The Poetics, with colleagues and artists like Mike Kelley and John Miller. During his career he has worked with Constance DeJong, Tony Conrad and Dan Graham and Sonic Youth. The multimedia works that made him famous are projected in three dimensions, often on spherical surfaces, which emphasize the emotional charge of the object, a face speaking, staring at something or yelling. The video material Oursler often uses is a kind of footage of human faces, whose result is that the three-dimensional objects on which the light beam is concentrated appear to have life, and give the spectator an undeniable sense of surprise, fascination and at the same time fear. And through the combination of sculpture, multimedia projections and recordings of the human voice, Oursler researches, in all his works, the interaction with the audience and the animation of psychological and philosophical concepts within an almost dreamlike zone: the youth culture, the relationship between media and the human mind, psychological disorders are all issues discussed and explored in Tony Oursler’s surreal images. In 1989 Tony Oursler took part in the Whitney Biennial in 1992 at Documenta in Kassel, in 1993 he had a solo at the Centre d’Art Contemporain in Geneva. Among his numerous exhibitions there are: the personal exhibition at the Lisson Gallery in London and at Metro Pictures in New York in 1996, his participation in the 1999 Istanbul Biennial, the exhibition at the Lehman Maupin Gallery in New York in 2001.

The following interview was conducted for the exhibition catalogue The “Song of the Electric Body” within the Direct Digital, which took place in Modena (http://www.directdigital.org) from May 29 to June 28, in which Digicult edited texts. And this is the second interview extrapolated from the catalogue and published here in fully (after the one with the musician and sound artist Agostino di Scipio by Marco Mancuso for Digimag 45 June 2009 (http://www.digicult.it/digimag/article.asp?id=1493). The work by Tony Oursler on exhibition in Modena was Round-nosed-whistling-jack-off-dumb-fuck, granted by the Galleria Emi Fontana. And an interview generated from this work, and it was the starting point for a reflection on the work of an artist whose work is almost completely impossible to summarize fully.

In Round-nosed-whistling-jack-off-dumb-fuck, the artist transforms the space into an abstract “shooting gallery”. Video projections of explosions on the walls create the backdrop for sculptures in the form of pellets, on which there are deformed images of “talking heads”. Images and sounds in synchronization create an audiovisual show of images, disturbing sounds and dramatic words. The reference to the tragedy of war and the indiscriminate use of firearms permeates the entire installation, where an apparent dimension like “theme park” contrasts with the images presented by the media, in which the representation of reality loses all power..

Claudia D’Alonzo: Round-nosed-whistling-jack-off-dumb-fuck is an artwork in which the viewer is immersed in a violent atmosphere, almost apocalitic. Which is the relationship between the impact of your work on the audience and that of violence overload within the mass media images?

Tony Oursler: Violence is tricky when mediated. One can never replicate true violence and it’s impact on the individual or society, I can only shift point of view. In other words the classic position of long range viewer taken as the usual could be interrupted by some installation ideas. The participant is inside the event but given safe status in the endless battle that has become game-like. I hoped that the absurdity of the personification of bullets would introduce a chain of questions for the viewer that would open up a new perspective.

Claudia D’Alonzo: Which kind of involvment you wanted to obtain with the viewer in Round-nosed-whistling-jack-off-dumb-fuck, both on a perception plan and on rational reflection?

Tony Oursler: I don’t directly control the participant, that is the magic in art the unknown result: everyone comes away with a unique experience, they make the work personal. In this project, I set up a situation where the participant is almost in a theme park type atmosphere, or a simulation of a deranged fire fight.  I was playing with a combination of media depictions of violence, simulations and hi-resolution animations to fuse humans and projectiles. I’ve given  language to the lowest most primitive projectiles; usually the relationship between the bullet and the target is disconnected I wanted to energize that relationship. Personally, I want to rethink violence all the time, how we see it, why we create it?

Claudia D’Alonzo: In round-nosed-whistling-jack-off-dumb-fuck the different audiovisual characters are linked in a special relation which is not translated in a real communication, as often happens in your works. Not-linked voices in a field, which is the field of the art-work. Tell me something about your work and which are the links with relations and communication concepts in contemporary society?

Tony Oursler: I think you are on to something here, we do not communicate in direct and traditional modes most of the time. This is where there is an amazing vast territory to explore. We are able to listen and see in modes that have nothing to do with the traditional media grammar. Games and movies replicate one way of connecting to our sound and vision but I’ve been seeking other ways of connecting fields of communication a composite of layers of image sound, language and form. For me this is an experimental process that goes on all the time in the studio and finds it’s way into projects.

Tony Oursler: The obsessive quality of weapons and the fantasy of using them is so loaded for lack of a better word. Personal Shooting Games are generating more capitol than hollywood movies and there is a reason for this: it’s sexual, it’s male and it’s at the root of some very deep drive. There is a connection between a primitive early society and the high tech world of today that I wanted to unlock with this installation.

Tony Oursler: The tools are part of the process and also a way of keeping us in the real world. Escapism it is at odds with the magic of technology, I want people to drift out and return to the real world. I hope that art works in this way and somehow it’s reflected in the materials and production of that artwork.

Claudia D’Alonzo: In contemporary audiovisual digital scene, people speak about landscapes, about audiovisual spaces. You were one of the first to extend the video image from screen boundaries, projecting on other superficies. You were one of the first to tear also down the borders between work-space and audience-space. How did it change this relationship between space and image, and which are the main differences between your way to work on this relationship and how other contemporary artists work on the same item?

Tony Oursler: I think that I was born in a funny time when media and art were at a nexus and it was natural for me to pick up the tools. I live in a kaleidoscopic world of old and new technologies, and am happy there. I started as a painter and believe that history is key to moving forward into complex visual relationships with moving images and space, but there is a shadow history that must be part of contemporary understanding of media-space and art. A lost history must be recovered to help people understand the full extent our of efforts construct virtually. I like a lot of what artists are doing today and also am amazed at the acceptance of the moving image as a respected form. It was in such a ghetto for so long and now it’s become normalized — that is the way it is with major cultural shifts, one can’t imagine what is was like before. Not that I think about it, I’m too excited by what is happening now to look back. Fantastic new machines are now being used by kids all the time that extends the media fluency into the future.