Raul Martinez: The Tenderness Of Metal 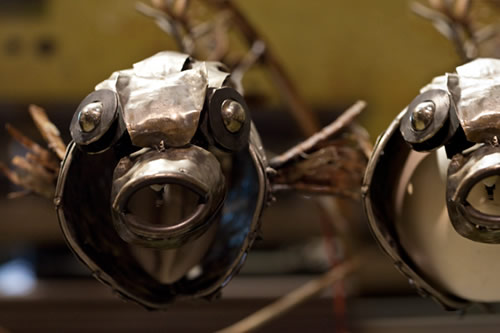 Although Digimag deals with digital culture, this month we want to devote a well-deserved space to an artist, whose work does not exactly fall within this category, but it perfectly places itself within that field of research that our magazine carries out in the framework of (applied and reused) technology, mechanics and art. The general trend does no longer lie in the celebration of technology in itself, but aims to grant priority to the concept and the tangibility, also when, in order to obtain them, the artist uses techniques and materials that are not exactly the latest fad.

We met Raúl Martinez at the summer edition of Dorkbot in Barcelona and, like everyone else, we fell for the cuteness and simplicity of his creatures. Raul, with a Classical Art and Industrial Engineering background, creates robotized, mechanic, pneumatic, kinetic sculptures through the use recycled material. Such sculptures have a lively, organic aspect and morphologically resemble fishes, star horses, anglers, sea weeds, crabs, thus reproducing an out-and-out mechanic marine ecosystems, as it occurred in 2007 at the exhibition Vida Aquatica in Igualada.

Raul, who we visited in his workshop in Igualada, Catalonia, seems to posses the simplicity and vitality of his marine animals. The huge space where he spends his days looks like a garage, where industrial machines are built and one has to pay utmost care because, as Raúl himself warns, “everything stains and cuts in here”. Raúl has been working with his father and brother at developing or repairing this kind of machines for 10 years. At present the three of them are planning and building machines that can swallow the debris resulting from the demolition of buildings and that can separate the stones from the rubbish, so that they can be used again.

A couple of years ago this activity started not to be enough. He started recycling what remained on the floor at the end of the day, playing with the machines to cut and bend metal and by adding other elements he assembled sea creatures, which a year later he endowed with movement. As one steps forward in his workshop, the little animals – camouflaged among other metallic objects – start to become animated. To these creatures Raúl devotes the solitary afternoons in his workshop.

Let’s leave the word to him, who we had the pleasure of interviewing.

Raùl Martinez: Thank you. It consists of a cable protection that I found in the streets and the engine of a windscreen-wiper. The latter pulls the metallic thread that causes its tail to roll up, the mechanism is simple. The body consists of recycled metallic material. Obviously these creatures come off well at an exhibition, where one can create a light-blue lighting, as if they were underwater, and where their appearance can be carefully orchestrated.

Barbara Sansone: Their movement is very sensual, organic, in sharp contrast to the coldness that generally characterizes the metal these creatures consist of…

Raùl Martinez: That’s exactly what I am trying to achieve. I try and I try until I obtain a smooth movement that transforms and transfigures the hardness of the material. At the beginning I tried to obtain more sophisticated objects, but I soon realized that simplicity makes everything more interesting and people are attracted: when one sees a mechanical object, it feel good to understand how it works, rather than being overwhelmed.

Barbara Sansone: How does your creative process work? Do you first decide what you want to build and then you look for the suitable material or do ideas come to you depending on what you find?

Raùl Martinez: Generally I start by thinking of an animal, building it and looking for the right material, but sometimes I just can’t find it. Now and then I come across something that suggests another idea, I so start building another animal before I have completed the previous one. At times the animal becomes very different from my initial project. It’s all about experimenting, trying out parts and studying their movements. When I developed the sea stars, for instance, I did not know that I would create the movement by using these parts. See, they are springs, metal parts, sponges and their engine belongs to some old sewing machines. I found one and decided to use it, but there was no project. I neither work with sketches nor with miniature model: I immediately start by building the animal, which generally occurs spontaneously, then I modify it as least as possible, just to improve it, adding a reinforcement or protection and other systems that make movement more organic.

Barbara Sansone: Does the same applies for the aesthetics?

Raùl Martinez: Yes, I usually polish the pieces or treat them with acids to obtain rust, so that they resemble the image I have in mind. I also like to leave them somewhat incomplete to let people play with their imagination and catch sight of their mechanisms and articulated joints, thus making the most of the movement.

Barbara Sansone: The creatures’ eyes are very expressive, what do they consist of?

Raùl Martinez: Mostly ball buffers, but not always. I was in a hardware store when I saw two black plastic blocks, I immediately imagined them on the angler’s snout.

Barbara Sansone: Also the creatures’ paraphernalia is remarkable and very well integrated with the work, with utmost care for details.

Raùl Martinez: Yep, I like it when everything is coherent: when I install the animals at exhibitions I try to create a suitable environment, I develop a sort of labyrinthine pathway that allows visitors to discover them little by little. The angler, for instance, does not move, but its LED attracts the visitors when it is hidden in the obscurity. When someone approaches, a sensor is activated that suddenly brightens up the creature, creating a surprise effect.

Barbara Sansone: Why did you decide to activate your creatures though proximity sensors and other “interactive” mechanisms? Why don’t you use switches or don’t you just let them keep moving during the show?

Raùl Martinez: The idea that people in a museum don’t have a chance to touch the works, somehow disturbs me. I’d rather see people feel involved and I have noticed that this way they are stirred and want to interact. When they leave my exhibitions, they talk about their experience and during the visit they make suggestions on how to activate my creatures. This fish, for instance, requires that the little balloon in its mouth is inflated by a pump. In most cases I use simple sensors that can be found in any garage.

Barbara Sansone: Have you taken part in other exhibition apart from the five editions of Vida Aquàtica?

Raùl Martinez: Not yet, but a theatre company asked me to develop some little monsters for a show that will open on October 3. I have already delivered all the pieces, but you can see them on video, and of course you are invited to the opening night.

Raùl Martinez: Yes, but I don’t use it to work, I confess that it gives me a headache, that’s why I am so slow in replying to your emails.

Barbara Sansone: Here are the two little ones that I saw at Dorkbot: the hermit crab and the snail. The snail in particular has an incredibly elegant and sensual movement… When you create an animal, how do you manage to reproduce the way it moves, using such simple mechanisms and metal?

Raùl Martinez: I usually observe the real animal for a long time – either live or watching documentaries – then I try to simplify the movement, so that I can work out a system to generate it. As you can observe in the sea stars and the snail, the movement often becomes more organic simply by using springs. I have recently seen a documentary where some little sea turtles’ eggs were hatching. The turtles were extremely sweet and awkward and I felt like reproducing the clumsy movement of their fins by using two non-aligned engines. I am going to show you the prototype, because I haven’t finished it yet.

Raùl Martinez: So far, but here you can see a wolf, again a prototype. At first it snuggles, then it stands up: here’s the manual movement, I haven’t installed the sensors yet. Can you see, it lifts its head. The idea is that when someone approaches, it lifts its head and howls thanks to a little card that I have found with a 20 seconds sound memory. Moreover I am starting to think that insects too can be interesting.

Barbara Sansone: How does the angler work?

Raùl Martinez: Thanks to a sliding door’s lever and a windscreen-wiper’s engine. The legs and the belly rest on a polystyrene support that I have painted, so that it floats. We are going to take it for a swim at a park downtown. I’ll have to leash it with some transparent thread, otherwise I’d have to get into the fountain to retrieve it. Sometimes I have to: it is funny, it’s like having an angler on a leash. You’ll see how people will approach to touch it, comment and ask me questions. Once I had it next to me in my car, security belt fastened, when I drove past two policemen. They looked inside and signalled to move on, but I could tell by their face that they thought I was nuts.

Barbara Sansone: How do you promote yourself, how do you get people to know you?

Raùl Martinez: I am rather shy and lazy when it comes to write down my projects to enter a contest and I use the computer as least as possible. I have a rather makeshift website and scarce spare time. Generally people who have been at the exhibitions that I have organized call me. Sometimes I simply go to the institutions with a couple of my little animals and I say that I have an appointment with the person in charge of the cultural programs; at first the reply that it is not true and try to throw me out, then the employees start to gather around the creatures and in the end they realize that what I do is interesting. That’s what I did at the Barcelona Hangar and they ended up introducing me into Dorkbot, where we first met.

Barbara Sansone: We were very happy to! Well, shall we take the frog for a swim?

Raùl Martinez: Certainly! Then I’ll offer you something at the bar to repay you for having come all the way to visit me, and then I’ll take you to the station.