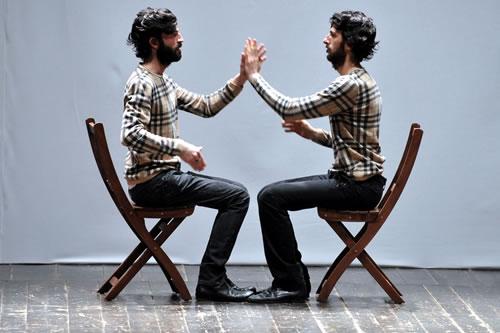 Alessandro Sciarroni from San Benedetto del Tronto already has a long-lasting and refined artistic history, and above all is appreciated in the European panorama of experimental theatre, and he turned out to be a “sensitive interpreter of the contemporary artistic scene”. This young actor and director from the Marche region, grew as an intense and impeccable actor with the Compagnia Lenz Rifrazioni from Parma, and then went back to his native region, where he conceived the idea of the Corpoceleste laboratory, and organized seminars and theatric productions. His first artistic creation, If I was your girlfriend – inspired by La Bovary c’est moi, collection of poetry by Giovanni Giudici, and Madame Bovary by Gustave Flaubert – was showed in the athletic track in Porto d’Ascoli, a non-conventional place and a demanding adaptation.

Desires are explored in the Prince song, where adolescent dreams are revealed in music and also in their own defenselessness, helpless but hopeful. He then takes part to the final venues of the 3rd edition of the Premio Internazionale della Performance with Your Girl, performance derived by the previous production where the love experience was told through the eyes of a disabled girl, a Madame Bovary who wishes upon what is common, and not what would be normal. Actress Chiara Bersani is perfect in her role which redeems her from her own condition, and puts her on the same level as performer Matteo Ramponi, without redundancies or emphasis. A show which delicately involves the spectators, beyond the mere visual impact, beyond the minimal scene; a courteous subtext and a valuable epilogue. If I was Madonna, his most recent work, was organized with writer and arts critic Alessandra Morelli; in it, the identity of each of us is revealed through the stories that Alessandro collected on the web from hundreds of users, who in turn manipulated the texts of the American pop star’s songs. The performance is structured like a long video clip which examines the main themes of the poetics of Miss Ciccone, who has no control over the direction, and above all in her place as a performance artist there is someone else (three men of different age, a young disabled girl, a woman and a little girl). The spectator therefore watches an original and new, since the work is moving through the difficult territory of identity of each one of us.

The Marchigian direcotr and performer naturally moves between scenic event and living conscience, in that inter-human phenomenon which is the root of theatrical act. His experience and research stimulated a sensibility of loneliness and social matters, even pouring over to literature, philosophy and anthropology, where he can research constructions of a great visual impact, without becoming banal. His research is meticulous and hand-crafted, classical and modern at the same time, well-balanced between creativity and modelling. A new happening for the audience, and a new season for theatre.

I met Alessandro Sciarroni a late afternoon in the quiet Piazza del Plebiscito in Ancona, and with interest and kindness, a profound dialogue was born, together with an intense exchange of opinions on his work and the situation of research theatre in Italy, and to many answers to my questions.

Massimo Schiavoni: Alessandro, you have a storic-artistic and actor-performer upbringing. How big was the influence of your studies and experience with the Lenz Rifrazioni company of Parma, for you to become one of the more sensible interpreters of the new contemporary scene?

Alessandro Sciarroni: Working with Lenz Rifrazioni means to confront with a visual artist’s modus operandi. I learned more about contemporary arts while working in this research acting company, than during many years of academic studies. It is true, anyway, that had I not studied Arts History at the university, I wouldn’t have been able to develop a personal taste and style. The theoretical lessons which influenced my concept of “vision” the most, were those of contemporary photography I followed in Lisbon. Discovering photographers like Diane Arbus was like a revelation.

Massimo Schiavoni: Can you tell me about your roles in the monographic project on Calderon de la Barca?

Alessandro Sciarroni: It was a monographic project which lasted many years; we produced Life is a Dream, The Mighty Magician and The Constant Prince. I played the role of the male protagonist in all three creations, respectively Sigismondo, Cipriano and Don Fernando. It is impossible to resume in a few lines many years of work. For example, artistically it was very important to me to confront myself with a group of ex-patients of the Colorno psychiatric hospital, where we had many theatre laboratories for the staging of Life is a dream. From the point of view of visibility these roles gave me the possibility to work outside Italy, and to be noticed by the critic. We were twice at the prestigious Festival di Teatro Classico of Almagro, and in Italy Franco Quadri positively reviewed my performance in The constant Prince. Remembering those moments is like going in search of lost time, and maybe also of my lost scenic body. I don’t think it would be possible for me, today, to meet another strong personality like Maria Federica Maestri’s (the artistic director of Lenz Rifrazioni), with which I was able to be generous and enthusiastic as a performer, while at the same time receiving so much in exchange, as an artist and as a man. There are encounters that happen only once in a lifetime, and I was lucky enough to meet her, even if our paths seem divided now.

Massimo Schiavoni: You told me about experimenting, generosity, enthusiasm and meetings which changed somehow your being a man and an artist. How important are these specificities in building a contemporary artistic journey?

Alessandro Sciarroni: The artistic research I carry on with the collaboration of critics and writers like Alessandra Morelli, is strongly influenced by these experiences. My biography cannot be separated by my art, especially today, a moment in which it is more and more complicated to be able to identify a common tendency in the contemporary researches. If we think about the fact that 2 years ago, the award for an event like Performa in New York, went to Francesco Vezzoli who staged inside the Guggenheim a version of Così è se vi pare by Pirandello, we understand that the concept of “contemporary” can really be extended to anything.

Massimo Schiavoni: How was the “separation” between the industrial spaces of Lenz Rifrazioni, and then how did the birth of Your Girl, your first important creation as an independent artist happen?

Alessandro Sciarroni: First of all, I moved away from Parma, a city where I had been living for almost 10 years, and founded the company Corpoceleste_C.C.00# in the province, in San Benedetto del Tronto, the small Marchigian town where I was born. This allowed me to get easily in contact with the spaces and funds concession system so I could start to work. At the same time, the choice of this province, limited the expenses I had to face to open that activity. So I started with a theater laboratory, and by renting a room in a dance school for some days a week. The lab was the first study occasion we had, and as a result it produced the Your girl project. At that point, I sent the program to the Contemporary arts gallery of Trento, and they decided to let me participate to the International Award of Performance with that work.

Massimo Schiavoni: In Your Girl you put on scene a girl redeeming herself from her condition, and you highlighted some kind of a “body opposition” with the other protagonist, and graceful, natural and spectacular moves in a slow rhythm. What does Chiara Bersani really desire? What did you want to share with your actors and what did you want to pass on with this visually impressive work?

Alessandro Sciarroni: By staging Your Girl, I concentrated on the representation of the moment we were living during the rehearsals. It was my first important appearance on the national scene and I suddenly was presenting my work with other artists from around the world and this made me and the interpreters particularly enthusiast but also scared. All this was translated in Chiara Bersani’s action, physically disabled actress with Osteogenesis imperfecta, who lets all her clothes to be sucked into a vacuum cleaner, until she remains completely naked in front of the public. For all the play’s duration, the audience believes Chiara undresses of her clothes as you would pick all the petals of a daisy, to find out if Matteo Ramponi, who stands behind her, could love her. Instead, when Matteo comes to the forestage he lets Chiara guide him in the same action until he too remains naked. In a sense Chiara redeems herself from the genetic condition her disease imposed on her: because in nudity and desire, her and Matteo become equal.

Massimo Schiavoni: Tell me about your last production, If I was Madonna, which was previewed in Ancona and had a great success in the Festival Teatro a Corte in Torino.

Alessandro Sciarroni: If in Your Girl I wanted to portray the moment I was living with my actors, in If I was Madonna I researched in my life for some events and conditions I could counterpoise to those of the pop star Madonna. It is not a mimetic attempt: the function of performer I have on the scene is always the same, while I look for a subject who resembles myself as much as possible. For this reason, After several failed attempts, which symbolize my own story, towards the end of the show, moved by a cognitive egocentricity, my figure divides in two thanks to the physical presence on scene of Ettore Lombardi, an actor physically very similar to me. In one of the final images, through a video projection, utopia becomes reality: thanks to the digital artifact our figures become albinos, and move around an Eden ruled by the apparition of the pop star’s voice.

It is not a narrative play, I don’t want to tell any story. It is a kind of evolution journey, moving from the evocation of an infantile trauma just to regress. I tried to treat the figure of a pop star as if it were a classic to translate and stage with my language. The show will be on October 18 in Milan, at the Spazio Mil; on October 16 in Macerata, Vetrina Nuove Sensibilità; on October 10 & 11 in Naples at the Nuovo Teatro Nuovo. On September 19, instead, I will present in Ravenna (included in the “Vetrina giovane danza d’autore”) a sneak peek of a new work, a performance short format lasting 20 minutes, titled Cowboys, on color and superficial identity