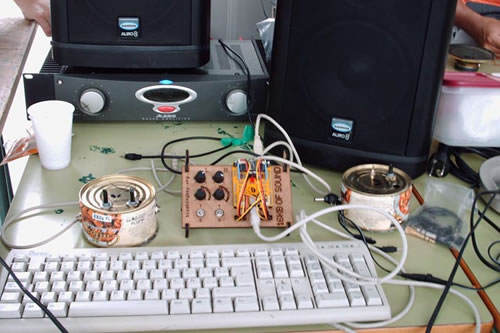 In this epoch, we are witnessing the rapid evolution of technology, which facilitates scientific research and improves our lives. But technology is also captured, manipulated and used for novel purposes in the arts. Experimental practice with technology in the arts is increasingly visible in exhibitions and museums around the world and on the Internet, while there is always a strong compulsion to create spaces where experimentation is possible. The objective of these centres is the public diffusion of this mix of discìpines, to invite people to experiment, understand and express their creativity in unison with others and in this way to create culture.

This process is not straightforward. We are in the midst of a period of strong contradictions, where the institutions and society are not sufficiently developed and it is necessary find teachers. One of a few centers in Europe concerned with this problem is the the art center Laboral de Gijón, directed by Rosina Gomez-Baeza. Among the various activities of this courageous lady is the establishment and management of the Arco Foundation, the association Friends of Arco, and the publication of the quarterly ARCO, Arte Contemporáneo, as well as the directorship of the contemporary art fair of Madrid from 1986-2006.

The art center Laboral de Gijón has been established two years, and is already a very active centre with beautiful spaces that continue to grow. Her team consists of ten full time staff and eight assistants, who support an exhibition center dedicated to arts, science, technology and advanced visual industries. It also deals with research, training and production, and thanks to a permanent call aims to help artists to fit into the channels of festivals and exhibitions. The center aims to offer support to local artists to find contacts, grants, residences. As the director explained, this is a remarkable effort, especially in the territory of Asturias. The main objective of Laboral is now the foundation of an extensive media library, which will open December 18 with an exhibition curated by José Luis de Vicente.

Among the summer activities, the center hosted the week of SummerLab organized with the Hangar Center in Barcelona, a meeting of digital arts enthusiasts who work with software and hardware to produce free electronic art projects of all kinds. The activities of the summer workshop were grafted in different research areas of the center, including sustainability, ecology, free media, collaboration, distribution, security, electronics and the art of inventing. The head of the educational programs of the Laboral, Mónica Bello, with the help of other team members of the center, was keen to assist participants by providing help and tools, as well as accompany them to visit the center and the current exhibitions.

Under the auspices of the Hangar in Barcelona and the art center Laboral de Gijón, dozens of creative people came together for a week to take over a campsite and a large space, with unpredictable and curious results. Participation in the second edition summer workshop held from 3rd to 9th August 2009, gathered a large crowd of people from Barcelona, the majority of which were women, dispelling the myth that the world of ‘electronic art is for men only. The activities were divided into different nodes, each managed by one or more coordinators and open to those wishing to participate in one all week or check out each one. In addition there were groups and individuals who collaborated in several nodes to develop personal projects and who will continue their usual activities taking advantage of the aid and experience of other participants.

Each day was inaugurated with a meeting coordinated by the director of Hangar, Pedro Soler, to present the daily program and schedule, including free bike transport and meals (breakfast and lunch were prepared by members of the organization in a kitchen set up in the same space). By late afternoon, after a few hours working in a fully autonomous manner, there were a series of presentations on the various activities of the participants related to art and technology.

Among many interesting speeches was a presentation by Italian architect Michele Pecoraro on ‘Houses of Straw’, data visualisation and ecological projects by Hernani Silva ((re: the farm city); presentations of free video and 3D software called Qeve; processing by VJs Lot and Blender; works and inventions by the eclectic artist Julio Lucio; multimedia installations and sound by current artist in residence at Hangar Magdi Mustafa from Egypt; presentation of operating system of GOTO10 , an international collective of artists and programmers dedicated to free software; and the work of Shady El Noshokaty, also Egyptian, and tAndy Gracie, which combines robotics, biology, ecosystems, and software. The event was honored by the presence of two impressive artists: Shu Lea Cheang, prominent figure of new media art for many years, and Marc Chia of One Man Nation.

Throughout the week, minipimer.tv in collaboration with Surt.tv Neokinok streamed and documented the event, broadcasting online a series of live interviews, discussions coordinated by Marcos García del Medialab Prado in Madrid, and reportage of the most exciting moments in the laboratory. On the final day of Summerlab, Saturday, August 8th, there was a presentation of the results of the workshops, performances and concerts at the Laboral space which continued later at the bar of Gijón XYZ.

Among these, perhaps the most successful was Absurd Machine created in the node OpenFrameworks, directed by Arturo Castro and Chris Sugrue. Thanks to this tool and other free software and hardware like Processing and Arduino, the group has created a closed circle of computers that sends and sequences messgaesin a disparate form (lasers, detecting movements by webcam, socks lying around, lentils, Hairdryesr, inventions of all kinds), creating striking effects and futile fun, where profound attention was paid to the mistakes of machines.

There was also funny musical performances performed using tools more created at different nodes during the week: like Arduinome, an audiovisual controller inspired by the monome platform and realised in the group directed by Alex Posada, Director of the interaction aboratory at Hangar; or sound objects assembled in the node “Cacharreo do-it-yourself”, directed by Jano, Víctor Mazón and Diego de León, where people constructed electronic sound project from recycled, low-fi materials (the first task of the node was to retrieve a wheelbarrow full of electronic waste to be disassembled and reassembled in the form of new objects which produce sounds).

Among the video documentation were the urban interventions of the node Su última voluntad, which caused many people to cycle around Gijón hunting for abandoned or unused places in the city, and to create a map and a video document of interviews with local inhabitants, and Frikikids, a node dedicated to the introduction to digital art to children, a place where you could propose activities that will teach critical consumption and creative use of technology.

To promote ecology and sustainability, Hernani Silva (re: the city farm), in collaboration with people from the laboratory Huerta Guerrilla, created a little vegetable garden that was irrigated in response to changes in plant moisture level and environmental temperature. They also created small bombs of seeds to throw about the city in a guerrilla action that was a statement of protest against a lack of green urban space.

The week was dedicated to productivity, exchange and recreation. People can access the video of some moments from the laboratory online. Activities will continue at the Hangar and the Laboral, hopefully with more frequent intersections, given their complimentarity.