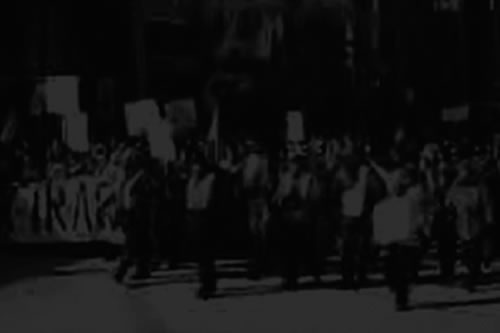 For its fourth edition the Biennial of Video Art in Mechelen (Belgium) Contour has opened the doors to a curator and to internationally renowned artists.

The Biennale was inaugurated on August 15 under the title Hidden In Remembrance Is The Silent Memory Of Our Future: a complicated concept, whose aim is to show history and the present in our collective thought, and where the past is a key element to understand the future.

The curator, Katerina Gregos, who had been directing the Argos exhibitions in Brussels until 2007, has managed to give an international dimension to an event which has occurred only in the local surroundings up to the last edition, and whose general aim has been to give space to video projects connected to the search for new generations merely in the Belgian/Flemish area.

Instead, thanks to Katerina Gregos, who lives in Brussels but has got Greek origins and has been working in the field of the international visual arts for many years (even if, far before the failure of Manifesta 2006 in Cyprus, she was pushed by her critical and political mind to create Leaps of Faith, a complex exhibition project right in Nicosia, a city equally split between Turkey e Greece), an event deeply rooted in the local spheres was introduced into a global context.

Halfway between Brussels and Antwerp, Mechelen (or Malines in French) is a little town set in nothern Flanders. A rich, flourishing, bourgeois, prosperous, wealthy, calm and silent town: these are perhaps the main characteristics of an urban area of less than one hundred thousand inhabitants, which is diffusing all around a cultural halo that can save it from a stuporous state and give a sign of contemporraneity. After all in Belgium (o rahter in Flanders, the northern area where Dutch is the official language of such a little country split in two parts), two towns have already managed to build their self-relliance that goes beyond the beauty of its centre square, the canals, the typical buildings of the Flemish golden era.

If this European area is beginning to share with the Netherlands the same interest for digital culture at large, the Mechelen city council seems to have weighed up the pros and cons, just like many other towns often ignored on a worldwide scale did in the last two decades: just organize a Biennale et voilà, as by magic the town exists on maps and becomes a destination for cultural tourism. And to end with this drift of cultural policy, it’s no accident that the characteristic of the festival is to host videos in the different ancient buildings scattered throughout the town. Even the Countour press release stressed it: «Mechelen is hosting a unique event for those who are keen on contemporary art and architectural history at the same time».

And so a languid and incredibly sunny Saturday afternoon in late northern summer has turned into a pleasant stroll trhough the Renaissance and Late gothic buildings, cobblestone pavés, canalsides provided with tables and terraces, the visit to deconsecrated churches, ex-hospitals, ex-factories, the town hall.

As we said, the title of the fourth edition of Contour 2009 alludes to history: «demonstrates it, supports its importance and looks into matters of historical representation and historiography». It’s no accident to talk about globally historical processes in 2009: twenty years after the fall of the Berlin Wall, artists seem ready to examine again the recent history, to write it again with a different viewpoint, focusing on events and facts that in a time of conflicts we are experiencing take on the meaning of symptoms, early warnings, metaphors, symbols.

Intent can consistently get on with the curatorial choices made by Gregos. After having visited Contour 2009 (apart from the obvious matters of cultural politics and the town’s self-achievement), a deep sense of heaviness, disorientation, and lucid cynism becomes evident when we think about the historical paths that have led us to a present crisis.

Black Box, Herman Asselberghs‘s video, just ordered for the Biennale (as well as other works presented among which there is the very VIP one by Eija-Liisa Ahtila), may be considered one of the most successful works, even with the plain simplicity of the installation and its short duration. The video shows that the beginning of our present, that is of the millennium in which we live, is not updated since early 2000 in the calendar, but since the international demonstrations against Iraq War 2, in February 15th 2003. The drifting world that we see today, began with the protests against the decision of the U.S. Government to attack Baghdad. Even before the images of death and those of the embedded journalists, the artist/videomaker and film critic born in Mechelen and living in Brussels, shows us the beginning of the XXI century through videos of the demonstrations shot by different artists all over the world and uploaded on You Tube. What we see in front of us is the effects of those moments: blurry images, toned grey and balck, abstract. People moving in front of us look like ghosts. The narration is carried on by a voice whispering (and then speaking louder and louder) that only in the present we can give a value to past events. The video is also one of the few works that try to che cercano di re-elaborate and study the medium of the video and its use in an exhibition. This is evident right from the title.

In fact, one of the fundamental limits of a video exhibition in the context of Contemporary Art, is often the carelessness on the video time and environment factors. Videos should be exhibited in a cinema and not inside exhition halls, with suitable audio and armchairs, so that the the audience is predisposed to see the video narrative development (be it objective or abstract). Instead, in the context of Contemporary Art, videos are still shown in black boxes, where the avereage audience watches it for about a dozen seconds and then goes away. Black Box also plays on the space in which it is projected. Low tones and monochrome make the video almost invisible, leaving the audience in darkness and disorientated in the black room where it is projected. The voice is always whispering the same sentence and absorbs you into a state of alert and anxiety; the abstract images in grey and black raise tension and curiosity towards something that seems about to happen. Just at this point the audience understands the sense of the video and just at this point it plays all over from the beginning, in a loop without interruption.

Alternatively, the eagerly-awaited video by Eija-Liisa Ahtila Where is where? seems the revival of an aesthetics that the Finnish artist had already used in her former works: a multi-part projection on five enormous screens installed in a black box. And so the narration is segmented into five different and simultaneous viewpoints. The story is the revival of a massacre in Algeria during the Fifties. An event that took place when Algeria was occupied by France and that cunningly brings us back to a vague post-colonial past; the confrontation and the conflict between Muslim and Western worlds; scenes of war, violence and escape similar to the common scenes shown all over the world every day on tv; the artist’s personal perspective and her daydreams. 57 unbearable minutes of video: a post-modern pamphlet perfectly shot, recorded, installed, and synthesized, playing with the Muslim common mind which may be good or bad, western bad conscience, death, fear, conflict. No statement , not a point of view, not even epic involvement: everything is too beautiful, too perfect, too politically correct and longlasting to catch something.

And finally the participation of the Russian collective Chto Delat is worth to be mentioned (and there are no less than 18 creations by 12 different artists at the Biennale). Their work consists of two videos and a newspaper which they produce by themselves and they distribute to the audience. Perestroika Songspiel: The victory over the Coup and Chronicles of Perestroika, both of 2008, are two videos that have to be watched in sequence. The first one is the story of the birth of “democracy” in Russia afer the attempt of a restoration coup détat was stopped in 1991; the second one is the video assemblagshowing the protests in the streets of Saint Petersburg between 1987 and 1991. Both of them actually describe the exact end of the Soviet Union and of the bipolar world after the Cold War. While the Second one consists of the editing of documents, the first one is pure fiction and is featured under the form of a greek tragedy, in which uno coriforo tells the events accompanied by a chorus that sings or comments the report of those days, mixing the Russian song tradition with jokes and puns about the creation of a democracy based on trade, multinational companies and capitalism. Chto Delat’s project was censured in post-Soviet Russia. The project by Chto Delat was censored during post-Soviet Russia.