The Murder Of Crows 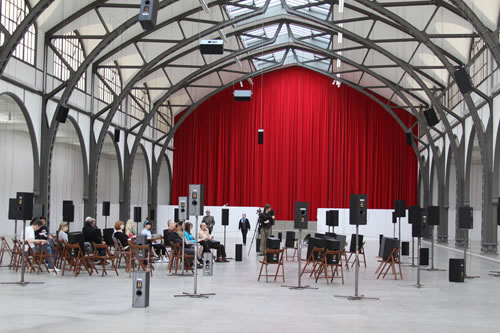 Until a few days ago it was possible to visit the installation “The murder of crows” by Janet Cardiff and George Bures Miller in the main hall of the Hamburger Bahnhof in Berlin, a museum dedicated to contemporary art.

The two Canadian artists, known for their multimedia projects, which combine sculptural, visual, installation / sound and narrative elements, have been working together since the mid 90s to develop a poetics based on the real game between perception and illusion (see also ‘ article by Barbara Samson – Cardiff-Miller: the evocative power of sound “, Digimag 23 – http://www.digicult.it/digimag/article.asp?id=818). The installation was originally commissioned by Thyssen – Bornemisza Contemporary Art in Vienna for the Biennale of Sydney 2008, and on this occasion was presented in the “works of music from visual artists.” organized by “Freunde der gute Musik Berlin in 1999, with the collaboration of Nationalgallerie, and since 2002 with the festival of electronic music and contemporary Berlin” Märzmusik “.

“The murder of crows” on display from 14 March to 17 May 2009, is primarily a sound art work, constructing an environment from extracts of musical compositions and a cantata. Due to its linear structure and the perceptual conditions placed on the users, the installation may be associated with an audio narration of which is done through 98 speakers, spread throught the space of the gallery. The issue presented is a reflection on fear and terror of contemporary society, where the loss of reason causes madness, disasters and atrocities.

The staging is reached across a curtain of red curtains, which separates the environment from the exhibition of the Museum, which was an invitation for viewers and listeners to enter the environment built by the artists. In the central nave of the main hall is you can visually perceive the essence of the installation: a small red table which supports a grammaphone, which starts from a semicircle and develops into a certain number of sessions. Some are employed by speakers, while others are let free. Once occupied by the users, these are surrounded by the sounds broadcast. The audio speakers arranged on multiple levels (resting the land, placed on chairs, on pedestals and suspended in air), followed by the semicircular provision in the central area and then thin out.

This distribution in space seems to refer to the license installation. “The murder of crows” is an English expression used to indicate both a flock of ravens, and their ritual of singing in a circle around the corpse of a “companion”. The relationship between the title and the organization of the scenic area helps to describe the funereal vision of two artists on our society.

A second reference, in both the explicit content in the staging, the press is “El sueño de la razón produce Monstruoso” (The sleep of reason produces monsters), by Francisco de Goya extracted from the series “Caprichos”. The sleep of reason is didactic, represented by a table that has supported the cone of the gramophone, which is widespread voice of Janet Cardiff. The show generated from sleep, symbolized by Goya with creatures of the night that oppress the figure of the sleeper, are translated by the two artists with the story of three nightmares, whose set design and sound, spread by many speakers, enhance the emotional impact. Like Goya, Janet Cardiff and George Bures Miller criticized the society in which they live to portray its folly, stupidity and arrogance.

The audio narrative has a linear structure: it has a beginning and an end. The entire composition is structured around the story of three nightmares, and ends with a lullaby, sung by the same artist on the music composed by George Bures Miller, as if it were an attempt by artists to reassure both themselves and listeners. The three industries are telling nightmares of death, of the atrocities caused by the physical and psychological torture in a prison and the consequences of war. The protagonist’s nightmares are the same as Janet Cardiff’s. His role is that of passive observer who undergoes emotional violence of his dreams without being able to react. His emotional state transpires from dormant and suffered tone of voice and the narrative which is reinforced by short pauses and tired breaths, barely able to externalise the terror experienced.

Victims nightmares are predominantly children: children who supply the machinery of a factory with his meat in an atmosphere full of blood, children marching like chained slaves, who suffer abuse and mutilation by the military. The nightmare is to miss the human element, of which there were only the signs, the consequences of the brutality described: a leg mutilated by bombs exploded, devoid of his body.

The speeches strengthen the emotional state of the voice, and scenographically contextualize individual dreams. The audience is surrounded by the sounds.

These environmental collages stimulate associations generated by sound sources which are recognisable according to their intensity and their composition, reinforcing the atmosphere of the story. Sometimes they support the voice, to make it less distinguishable, as in the orchestra of sounds produced by machines in factories whose uproar underlines the heaviness of the incubator. Other times they insert natural elements (like aquatic environments), which suggest the intimacy of a show.

The musical compositions are used in installation of Freida Abtan, Tilman Ritter, Miller of Orion, by Aleksandr Aleksandrov, Janet Cardiff and George Bures Miller. Their role is to enhance the dramatic content, although in some cases their association was questionable. In the case of mixing between different tracks “Bad Foot March” (Tilman Ritter, Orion Miller, Janet Cardiff and Bures Miller), who despite being an original composition by the ironic tone, if not insignificant, is always a triumphant military and “The Sacred War “(by Aleksandr Aleksandrov), a Soviet song for the control of oppressors, written in 1941 to the invasion German, put on a par with the two tracks (albeit with the intention to express the aberration of the war), seemed risky choice if not inappropriate.

Within the composition of the sound you can grasp some references to the security that gives its name. The environmental factors that have initiated the audio story, the cry of the ravens, are perceived by speakers suspended in the air. Their lament becomes stronger at the turn of the second and third nightmare, where their presence and their numbers are acoustically portraits by wing beats and the frequency of croaks, a way to a dreary funeral hymn.

Even in the lullaby that closes the installation you can find the explicit ravens: title “Did Crows Fly (Kathmandu Lullaby)” and in the text, which invites to relax and try to sleep, knowing that with the awareness of ‘ experience, the sleep is not easy. “Crows did fly / Through the sky / I hear their cries / Strange lullaby / Close your eyes and try to sleep …” The lullaby, that seeks to placate the souls, is a composition of music particularly sweet, and in its arrangement maintains a sense of bitterness and heaviness.

The use of the many speakers for sound spatialization, in my opinion, was excessive for a successful installation. The visitors sat on special wooden folding chairs, were able to enjoy the aural environment, maintaining the exclusivity of that time to listen and suffer physically, such as Janet Cardiff has suffered from nightmares, the intensity of that experience. Other users have preferred to find more points of audience (standing, sitting on the steps, lying on the ground), but almost always keeping the provision in a semicircle, facing the cone of the gramophone, in this way, the set design proposed by artists.

Few have walked among the speakers or sound chosen a point of listening to far from that situation collection. Perhaps the dominance of the figure of a voice that guides the perceptual experience of listeners, contrivance necessary for the functionality of the installation, the exploration of the distribution are among the speakers, seemed limited.

Orchestral compositions in every single sound source (instruments and voices) was assigned to one of the audio speakers arranged in a semicircle, which attracts a possible association with orchestral provision, but from track to track the relationship between the individual instruments and speakers varied. Given also the large deployment of audio speakers, not fully able to grasp the criterion adopted to spread the sounds, except for the sounds of birds (crows and gulls) diffused from speakers suspended in the air. Overall I believe that the effectiveness of the installation, its scenic and emotional impact would have affected the choice of a smaller spread.

I would like also to criticise the venue of performance. An environment so large and bright has created a certain distance with the personal and intimate atmosphere. Surely a more intimate and collected venue, like the exhibition space in Sydney for example, would have been more appropriate. Indeed, the heat caused by the presence of wood, the main material with which it was constructed and the presence of fine openings, which allowed the light to penetrate into without being overly intrusive, had reinforced that sense of recollection and intimacy so much desired by artists.

“The murder of crows” is however, a huge installation and well kept. The choice of artists to show the brutality of our society using clear arguments, told in a dream-like way, which I found nevertheless superficial.

By reinforcing the innocence of the children involved, they artists play a game with our emotions that is not too far from the spectactularisation of tragedy conducted by the mass media. Perhaps it would have been more interesting for the two artists to take a more critical perspective rather than simply using a contemporary situation of general and widespread violence in the society around us.