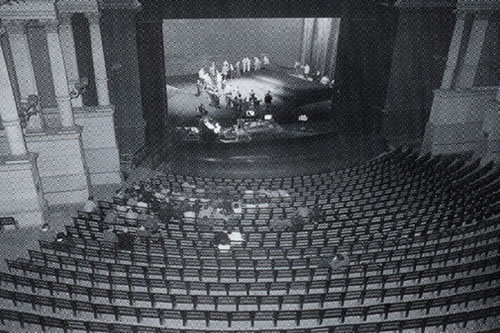 As one of the five sections of the new periodical art exhibition and electronical world Direct Digital – edited by Gilberto Caleffi – the Symposium staged last Thursday 28th May in Sala Delfini della Galleria Civica di Modena suggested an analysis on the permeation of art, architecture and mass media in space planning and imaging.

With a quite anglophone title, “From Art to Design and back” , the Symposium aimed at exploring a wide area in which four characters, completely different in education and objectives, faced eachother to offer a point of view on mass media and space invention: Golan Levin, Paolo Rigamonti, Boris Debackere e Lucrezia Cippitelli (that is me).

They had been invited to speak at the eve of the exhibition Direct Digital inaugural day, among important intarnational artists and me, i.e. an art historian. I played the quite awkard role of a person who presents things belonging to the past and then asks to the artists and the public: “And now, what’s on?”.

Golan Levin (designer & theorist) was certainly the most famous person featured at the symposium, also known among the general public, and whose topics were interaction design and man-machine interfaces. He had been invited by the editor of the symposium, Marco Mancuso , to act as critic and theorist exactly on the topic of interaction in the general symposium frame, i.e. where intervention is based on the use of mass media. It was really interesting listening to one of the most renowned artists of international interaction design and assisting to the presentation of his most celebrated projects. At the same time  as it always happens when taking part in conferences featuring big personalities  a sour taste was left in everybody’s mouth since Golan Levin dwells in his Web site above all upon the theoric side of his work, and the lecture seemed to be rather an informal and even not too enthralling list of his activities.

Boris Debackere, director of the V2 Centre for Unstable Media Laboratory in Rotterdam, one of pillars in the Transmedia Course at the Sint Lukas Accademy in Bruxelles and artist as well, talked on behalf of V2 about the projects realised by his laboratory in the field of the so-called “augmented reality” . In the described researches – among them two of the Dutch artist Marnix De Nijs’ works , i.e. “Exercise in immersion” presented at Deaf in 2007 and the most recent “Exploding Views – Remapping Firenze” (2008) – the attention focuses on wearable machines and softwares, which allow the user/watcher to interact with a space shaped and designed by computers or interactive cinema.

And if the technological research is taking great strides (the industry works now at the production of contact lenses able to make the person who wears them living an “increased reality”), in the research field of laboratories as V2, the prototypes developed and programmed by the staff are certanly less tecnologically inviting, but they are becoming very interesting tools for artists (V2’s purpose is to realise prototypes of tools able to satisfy artists’ ideas and researches).

However the question remains: the artist who is struggling with the augmented reality is always in an unstable balance between having fun as hacker (according to Pekka Himanem , a hacker is a person who has fun in opening a computer and looking how it functions and could be used) and the production of tools which are often more interactive games (which are undoubtedly loved by the public) rather than real art works. Where is the artistic project in all that? Boris Debackere tries to talk about it, introducing his analysis on the Cinematic Experience , which also made him produce “Probe” , an art work introduced by Digimag in its last numbers. It is a sort of cinematographic narration which interacts with the behaviour of watchers sitting in the room.

The aim of “Probe” was to analyse the cinematographic world and reveal how the whole cinematic experience is nothing more than direct involvement of watcher’s immagination (according to the Kantian concept of immagination). This is certainly interesting, even though “Probe” has been a great public success in every exhibition it was displayed (from Sonic Acts in 2008 to the latest Strip Festival ) because everyone (above all children) go nuts in seeing that what happens on the screen and in the audiovisual surroundings changes according to their movements: so the risk of the interactive game is always an undercurrent.

Paolo Rigamonti, designer, architect and co-founder of the Milanese studio Limireazero, based his lecture on the discussion and definition of the term “medium”, during the maybe fullest and most inspiring lecture of the symposium. As he had announced shortely before his speech  “I’ll be bad and old style” -, Paolo Rigamonti set out first of all a very important point regarding the literature engaged with media-architecture: technology has nothing to do with it, chatter counts for nothing and definitions are only advertising. What matters most is the fact that architecture is and has always been a medium itself.

It has always been like that, from Egyptian pyramids to Schinkel ‘s Neue Wache through Gropius and Botta . So what is “media architecture”? Rigamonti says that for the time being it is merely a word and the use of technologies added to architecture has a meaning only if they are really part of the sense construction of architecture itself. A deconstructing example: Times Square in New York is merely a symbol, and adding coloured and moving LEDs desplaying all the time world stock exchange data do not add anything to the building of the most famous crossroads in New York . They are only images which do not give any new information except the statement of their own existence.

However there are many examples of technology use in contemporary architectural research where technology aims at giving its own sense to the building or construction it is installed on. An example: the designers/architects group LabAu ‘s researches in Bruxelles, and above all “Binary Waves”, i.e. panels supplied with LEDs which move and interact with the urban einvironment surrounding them according to the information coming form the very same environment (noise, pollution, movement, ecc.).

The last but actually the first lecture in the symposium editor’s order was mine. The topics were the environments of contermporary art (the historic one), the cinema and the possibility to show cinema in spaces destined to art. A lecture which purposely excluded  as the public noticed  the topics of sound and videoart, to engage instead in the idea that the cinematic experience is based on spacial and environmental elements which force the watcher to really try out the cinema.

These elements have become a constant factor in Modern art from historic Avant-gardes on (from Gropius’ Total Theatre to Lucio Fontana). But what happens when artists present their videos during a biennal art exhibition without worrying about the cinematic effect? How many artitst are nowadays really engaged in this concept?.