Douglas Gordon: The Time Of Narration 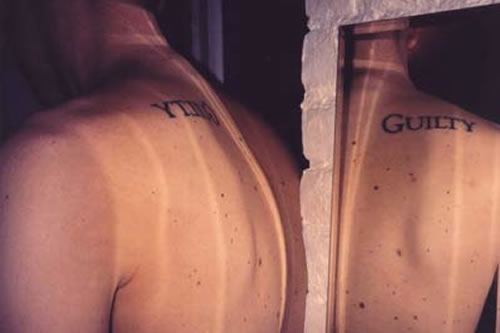 In the works of video artist Douglas Gordon – one of the most important “visual artists” of his generation, awarded with the prestigious Turner Prize in 1996 when he was just 30 years old – the timing of movie narration gets twisted by a new device, that modifies its extension, its message, and the perception of the action it encloses.

The video processing transforms the movie into a new and vast temporal platform, where normal time distribution to which we are used, is twisted by its same images. It is not casual that Douglas Gordon himself defines his work as a search of the unconscious of the movie, a layer not immediately perceivable, which exists only when the movie is de-structured. Douglas Gordon shifts the function of filmic timing on another level, showing thus a new perspective from which looking at a visual text already known (“Psycho 24 Hours”, 1993): what’s at stake is the willingness to accept a new function of the work in our collective imagination, and a new analysis of it as a function of the new discoveries in the arts fields.

The way Douglas Gordon decides to exhibit his works, follows the general idea to carry the audience into the projection, as a surface where images are played, and consequentially as a layer of the exposition itself. In this context, projection is transformed into a multi-sensory object (sight, hearing and touch), where interaction is absolute. The body of the moving image changes, the audience looks at it disfigured, elongated, overturned, smothered by the reproduction (“Bootleg”), space reaches them quickly, first estranging them from the “well-known”, then involving them on an emotional level, in an instinctively and viscerally captivating performance.

In my opinion, two are the relevant time constructions in Douglas Gordon‘s artistic and cinematographic works: the extension of time in the movie so as to confront the time of filmic narration itself, and the extension of time in the movie to confront with real time. Both of them have been represented, in two distinctive works: “Confession of a Justified Sinner” e “5 Year Drive-in”.

In the first, the use of filmic material belongs to a kind of second level of the artist’s search, where the movie is de-structured and presented in completely autonomous fragments. A part of the movie is chosen to be emblematic and meaningful, relating to a tradition of memories already consumed and historicized (“Through a looking glass”, 1999), or so that they have a strongly iconographic value, which destabilize the audience. Douglas Gordon chooses the myth of Dr.Jekill and Mr.Hyde, particularly in a renown cinematographic work from the first years of the century.

The literary cliché of the “double”, is developed through the multiplication by analogy of the projected paintings: two surfaces (which again stresses the dualism) on which the transformation of Dr.Jekill into Mr.Hyde is projected, on one surface in the negative, and on the other one in the original colours version. On of the two scenes slightly precedes the other temporally. The image in the negative, the double, Mr.Hyde, precedes of just a few seconds the original, Dr.Jekill. The impact of the installation is quite strong. The rawness of the actor is shown through the historical time of the action, and leads us into an age where reality was strongly featured in movies. The morphing of the protagonist is realized through a suggestive trick, halfway between grotesque and naive, which uses the strongest representations of human anguishes (like in Expressionism). Douglas Gordon slows down the time of the action almost to stillness, sculpture, so that the character is realized in space, with the insistence of a palpable image, pressing upon the psychological suggestion of the observer (the arts’ – not the film’s – audience ).

The paintings come one after the other in a painstakingly dilated time. The two times of the film, identical as the are as far as images are concerned, recall each other. One waits for the other, foresees it, announces it. Both are realized on the same level, in the same fiction, reinventing themselves in the film, for the film.

Douglas Gordon shows us a section of the movie that becomes a monument, which morphs into a carving, re-defined into the insubstantial space of the film. To say it like Tarkovski would, Douglas Gordon carves time, no the natural one, but the cinematographic one, subdues it to a new force which catalyzes and absorbs the audience’s perception, redirecting them towards a purely plastic dimension.

In the other work, “5-years drive-in”, we watch the epic confrontation between time as suggested by the movie and time actually elapsed. The five years which pass in the narration are fully shown, without cuts. This way, fiction is deformed by real time, and is forced to reveal itself as a plastic, fragmented and illusory work. Unity bursts into a cluster of almost motionless images, clung to the time of narration which suddenly switched off. The context of this work wants to be like the movie’s setting, swinging between irony and drama, as if we were watching a theatrical representation of the main character stripped off and forced to reveal himself. With an ironical air, this cinema goes back – for the most part – to a cinema “verité”, in a way stronger than any other previous attempt of self-reflexive cinema. Language itself is so crude, that what remains of the movie is the sculpted set up, bulky and suggestive. Douglas Gordon is able to consider cinema with a deep objectivity, through the element that gives cinema its main structure: time.

Time in cinema, is the closer connection between arts and life: it can reveal to us the strength of real actions, but also enables us to reflect on them and their nature. When the terms are decomposed, isolated, the whole supporting structure regenerates infinitesimally through images, that, dissenting as they can be, cling onto time and sculpt it.

These two works highlight the problem of objectivity in cinema, like an entity transforming into space, just when time loses its narrative necessity. Cinema lends itself to the purest plasticity, revealing itself in the formation of images which are still and left on a time substrate, forced to disillusion the audience on the most sincere form through which cinema fascinates us: the direct participation to life.