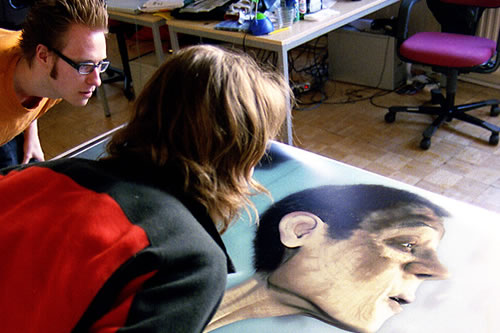 “Blender is the free open source 3D content creation suite, available for all major operating systems under the GNU General Public License”. Behind this synthetic definition opening the official site of “Blender” free software and open source, not only a programme for 3D modelling hides, but also an authentic work philosophy and a community of users that has developed thanks to the opportunities that new technologies have offered in many fields. Blender will be the protagonist of a very interesting workshop in the period of warm up of the next Hackmeeting in Milan , which will take place at the Bicocca university in June.

How can it survive on the market? It must not cost anything.

This seems to be the solution found by Ton Roosendaal, the Dutch creator of Blender; his history begins by the middle of the Nineties, when the programme was developed and then put on the market by Ton’s company, the Not a Number, without success. The company went bankrupt, but its bankruptcy started, in that case, an unexpected history.

The Blender Foundation was created with the aim of promoting the development of the programme and in 2002 the “Free Blender” campaign was parallelly launched; in a few weeks it managed to gather 100.000 € (almost 70.000 £) and this amount was enough to redeem the programme from the old financiers from the NaN and make it an open source.

So everyone on the Internet can use, today, Blender, which is commercially free of charge, they can distribute and modify it, whereas, around the software, a community that is structured in the blendernation.com and in the blenderartist.org has grown; moreover, there is an institute in Amsterdam that deals with the commercial part and the development of the open projects.

3D animation, visual effects and games are the use field of Blender, which tries to compete with fee-paying giants like Autodesk Maya, managing to succeed to some extent: for example it was used in the phase of previsualization of the movie Spiderman 2. However, Blender is mainly used for the Open Projects, where temporary teams of artists that are recruited as freelancers work on each individual project with a double aim: to develop something creatively valid and at the same time to improve the software.

Up to now there are three finished open projects. “Orange” and “Peach”, which produced two short 3D animations, Elephants Dream in 2006 and Big Buck Bunny in 2008, and “Apricot”, which was used to develop Yo! Frankie , a videogame that has been on the market since 2008. In the last few days, instead, the call to create the team that will work on the “Durian” project has been launched; they will produce a 3D short film with fantasy atmospheres that will involve the Dutch cartoonist Martin Lodewijk as well.

An important but marginal community.

“Working on Big Buck Bunny was exhausting, hard, beautiful and constructive. One of the most interesting experiences I’ve ever had”. This was the opinion of Enrico Valenza, a freelance illustrator with a long experience, who for some years has been devoting himself to computer graphics, too. He started by using exactly Blender, because it is free.

After taking part in the last few weeks of work on Elephants Dream , Valenza joined the “Peach Project” as a Lead Artist. It took six months of work to produce, in a record time, eight minutes of 3D animation, with “funny and furry” characters, along the lines of the planetary success of productions like Ice Age . It was very hard, but the team’s work was praised during the Holland Animation Film Festival and gave Enrico Valenza the opportunity to collaborate with important people, for example with the “Spark Digital Entertainment” Roman company of visual effects, with which he still works.

The role of the community in the development of the open projects is still a bit marginal. “Sometimes we asked for help for codes to implement, or to decide the final title of the short film, choosing it with a vote in a shortlist of suitable titles”, revealed Enrico Valenza, “but indeed it was we who took the final decisions”.

Although it is open and participatory, many competences are requested to use Blender, and people must take into account that, as in every artistic experience, the use of the tool itself does not guarantee good results. I want to remind when the coming out of Elephants Dream was accompanied by sentences like: “Don’t like the ending? Change it! “. Try then to download Blender and modify the open movie: probably, you will not feel like doing it any longer!