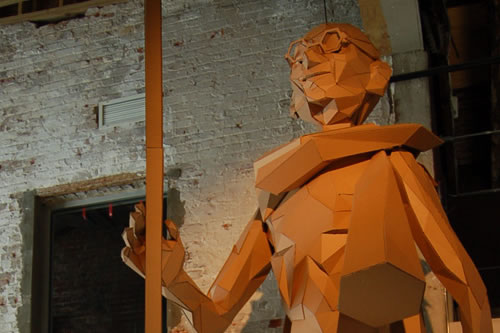 The _Augmentology 1[L]0[L]1_ project reaches out into a multitude of networked environments, like a multi-tendrilled creature, it explores and reports back information to a central hub, located at the _Augmentology 1[L]0[L]1_ blog. Existing in the virtual, the task is to explore other synthetic worlds and attempt to reflect back something of the nature of living within them and our own world. The resultant collection of projects and ideas can be considered a “Synthetic Reality Manual” as Mez Breeze, who initiated the project, describes it.

Mez, along with Joseph DeLappe, Shane Hinton, Trevor Dodge and Greg J. Smith are developing and testing ideas that come from explorations of on-line encounters and the development of virtual personae. Using a range of platforms that include World of Warcraft, EVE On-line and Second Life, as well as the multifarious social networking sites such as Twitter, Facebook and Friendfeed.

The written reports explore the themes of the duality of living within a digital environment and also in the ‘real world.’ The blog entry titled, Reality Mixing + the Geospecificity Complex, questions the uneasy relationship we have between the two worlds. In fact, the notion of In Real Life (IRL), as a way to express our location, Mez suggests, is more often used by those who have a negative attitude towards on-line worlds. There is a sense of there being a hegemonic status attached to the different environments, with the off-line one being the most important. Not that those who use on-line environments would consider Second Life and others to be ‘more’ important, but perhaps there needs to be a consideration of the importance of being active within them: for them to be considered more than just playgrounds.

AFK (Away From Keyboard), “indicates an inclusiveness regarding geophysical and synthetic states. Whereas irl evokes hierarchical connotations in relation to reality definitions, afk indicates a fluctuating, fluid involvement.”

It is this desire to create a smoother interface between the worlds, that drives the _Augmentology 1[L]0[L]1_ research and practise. Instead of the jarring disconnection from one to the other, there are overlaps and geological connections.

Joseph DeLappe, as part of his Eyebeam residency, completed a 240 mile march across Second Life using an avatar of Gandhi. This re-enactment of the Salt Satyagraha that Gandhi made in protest against the leverage of a salt tax during the British occupation of the country, was made using a treadmill connected to Second Life. Six days of every week, DeLappe walked on the treadmill and invited others in Second Life, to join him on the march. The physical walking, along with the continual immersion, lead to what he described as “a great sense of accomplishment  feeling content and quite frankly looking forward to a much needed rest! I had completed a rather fascinating journey  both in the physical and conceptual sense. In the days that followed the end of the re-enactment, this feeling of euphoria was slowly overtaken by a sense of melancholy – I found myself both saddened and conflicted for the march to be concluded.”

On completion of the march, he built several different sized versions of his avatar, including 17′ tall reproduction from cardboard and hot glue. This mixing of the two worlds, blending them both physically through the use of the treadmill and sculpture, and the emotional connection with his avatar (reflected in the request from a fellow walker to ‘not kill Gandhi’) draws these ideas away from being just theoretical standpoints and wordplay, and towards the realisation that there is an emotional connection being made in the digital world. More so than just the reaction to a Facebook update concerning the well-being of a friend (their relationship status or their latest night out), we are beginning to develop a sort biological/mental cross-connection where we might recall something taking place, and not be able to remember the location of it. Like a recollection of something that seems real but actually happened in a dream. The emotional connection is the thing that is real, not just the location. In this way, we might begin to realise how much of our lives are mental activities, rather than physical ones.

The blog entry, Identity Ecologies + Avatar Formations, explores further this sense of ‘where’ our identities reside. Approached from the perspective of traditional Social Psychology, the way we identify ourselves is through physical landmarks and biological traits, but an on-line personality extends and breaks this traditional rational formation of who we are. Indeed, Mez argues that, with many gamers having multiple personae on World of Warcraft and other platforms, this spread would normally result in schizophrenia. But instead it seems that these multiple personalities, ” represent a user’s ability for comprehensive immersion and allow for seamless and aggregational engagement. There is room for an overlap of these constructions including the potentiality to learn extensively from these synthetic Identity formulations.

The very name of the project, _Augmentology 1[L]0[L]1_, with its combination of 101, referring to George Orwell’s’ novel, 1984 and text-speak LOL (Laugh Out Loud), contains within it the essence of what it aims to achieve. In the novel 1984, Room 101 contains all of the possible horrors that a person can imagine. It becomes a reflection of whatever it is that you fear the most. It is used here as a taunt to those who believe that there is no need to venture into the virtual, that all they will find are the worst traits of human existence: trivia, sex and mundane ramblings.

_Augmentology 1[L]0[L]1_ reads like the field notes of an anthropology team, leading expeditions into known but uncharted territories. These territories are both psychological and geophysical, even though the co-ordinates may only exist in a virtual world. The research notes are continually being collated and published as new explorations are made. As well as the existing collaborators, there is scope for new members to join the expeditions and make field notes. _Augmentology 1[L]0[L]1_ is a Synthetic Reality Manual for our digital era.