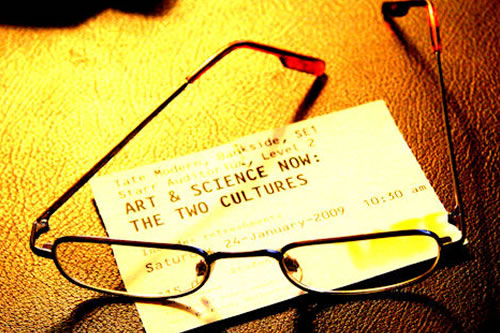 May 7, 1959, we are at the University of Cambridge, at the annual Sir Robert Rede’s Lecturer . A British physicist and author holds a conference entitled “The Two Cultures” in which he attributes many political, environmental and cultural worldly problems of our time to the break of communication that took place between science and the humanities.

The speaker’s name is Charles Percy Snow, namely Baron Snow, and his as simple as controversial famous definition of “two cultures” will become a topos of the cultural and epistemological debates in the second half of the twentieth century. Fifty years have passed since that speech and the anniversary did not slip the British journals: New Scientist, Financial Times, Telegraph stressed the driving force behind Snow’s formula, that while it was just too dichotomouson the one hand, it has created a number of important pedagogical and epistemological debates between the ways of producing science and art on the other hand.

Stefan Collini, professor of literature and history of ideas at the University of Cambridge, and editor of a publication that collects all the author’s speeches, explained in an article in The New Scientist http://www.newscientist.com/article/mg20227066.700-science-and-art-still-two-cultures-divided.html?full=true, that Snow’s real enemy were not only the humanist intellectuals, but the hyper-specialization of scientific language that, although it was inevitable according to Snow, it shouldn’t have been to the detriment of a certain bilingualism (as the scientists’ ability to transfer knowledge to society, and scholars’ capability to mind and write about scientific issues.

Charles Percy Snow wanted to promote science against an isolationist trend that has marked the intellectuals. Such a vaguely used social class, but about which the journal Nature for the editorial “Doing good, 50 years on” (n.459 , 10 of 07/05/09) pointed that people have to understand the intentions that motivated the intervention of “two cultures” and subsequently Snow’s speeches. One of these intentions was for sure the possibility to cope with the problem of poverty and get to the point of it. And this came especially from cultured people as should be the protagonists of the “two cultures”. In his 1964 essay, “With good fortune,” Snow wrote in fact “we can educate a large proportion of our better minds so that they are not ignorant of … the remediable suffering of most of their fellow humans, and of the responsibilities which, once they are seen, can not be denied. “

The journal Nature has taken this passage to vindicate the relevance of one of the stimuli that Snow wanted to convey in science: on the one hand defend science against attacks debasing human sciences, on the other hand accept the dialectical approach, awareness, the depth of history and of the results representation, which are peculiar to art and literature.

And this is the perspective of the “Third Culture”, the bridge between the two cultures advocated by Snow in his reading of 1963, entitled “The Two Cultures: A Second Look.” According to the author, between scientists and humanists, a new highly communicative culture emerged, a culture of writers who could deal with scientific issues.

And on the third culture many journalists today, especially the science ones, enjoy discounting Snow’s views on the new practice in blogging, photography and film art applied to scientific issues, or in projects coordinated by some institutions, as it has been discussed in a previous article on Digimag (http://www.digicult.it/digimag/article.asp?id=393), and let alone private initiatives as that of the editor and entrepreneur John Brockman, who with his essay “The Third Culture” in 1991 launched the website Edge, where he still tries to convey the intellectual energies of science and art to common empirical studies.

Baron Snow’s generally provocative and ambiguous observations, have focused a central paradigm in the philosophy of science: man (re)constructs his world according to anthropological constants. The products of science belong to them, as well as images, metaphors and languages which may vary over time and vary man’s conception itself. That’s why they must be subject to ethical judgments and ideal goals, such as the aid to countries with a lower life expectancy, which is a term that Snow himself often uses as a scientific benchmark .