Time And Identity In The Work Of Tacita Dean 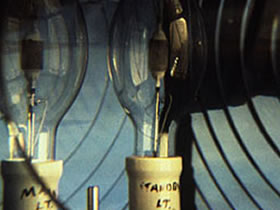 Let me begin this text with an hypothesis, and join two elements that will help us fathom some important works of the British video artist Tacita Dean, born in Canterbury in 1965, always so balanced between representation and documentation, between contemplation and the action of seeing.

The first question I would like to ask is: at what level do identity and time coincide? On the one hand a film gives us the expression of time, so clearly that none of my words would be the cause to boast this sector. We can, however, stem an issue that explores the possibilities of film in relation to time, with a more direct relationship with sight. To do this our look must be obsessive, it must limit the object isolating it from the context to which it belongs. The other level that we want to superpose is the one related to identity, namely the one that moves around the recognizability of the object.

Identity contains a precise temporal feature: it is based on the recognition of the object which is functional to the context. Our obsessive view captures the object in its context, discovering an entirely new shape, an identity not on immediately unfolded but that extends to the mildest contemplation, and that rejects the motion over time.

In Tacita Dean’s movies, all in 16mm anamorphic film, we are actually inside a space in which time scans the volume, and determines its real observation focus. Even if we see that a precise element is isolated in the shot, as happens in the video Bobble House (1999), where a house in the form of a sphere is represented in the middle of the desert, the feeling given by the image and sound in the film leads us immediately to consider the duration of that image, rather than its consistency in terms of space and volume.

Its isolation is an isolation in its lifetime, which reflects its identity of belonging, its being a house, thus considering it as a ruin, a finding discovered by time cyclicity, higher than any border.

In the work Disappearance at Sea (1996), the observation object is the inside of a lighthouse by the sea. In this film in 16mm, the camera is set exactly where the lamps’ beam of light is emanated by the sea level. The light form the lighthouse is the last limit of mainland, a band trying to disperse into the undefined borders of the sea. We look at this attempt from our inside, as if we were part of this attempt to lengthen the isolation of the land towards such an interminable surface as the sea, where boundaries blow over.

Again, time is part of a process in which the object’s identity before our eyes takes on a different meaning. The inside of the lighthouse is the centre of the desperate attempt to expand beyond the earth, and its rotation on itself becomes the symbol of a Promethean attribute of discovery and of the maturation vertigo. As the house became a ruin and a symbol of human affirmation in Bobble House , the lighthouse, in Disappearance at Sea, takes on a new identity in relation to the time we perceive it. We perceive the universality of such a deep human attempt in the light’s rotation to send its visible spectrum to the sea, in such a rarefied representation which is fully isolated from stylistic devices (and the anamorphic extension just catches the strain that is behind the action).

Tacita Dean repeatedly studies the theme of the sea, and her work is represented at the Frith Street Gallery in London and at the Marian Goodman Gallery in New York. Her idea of myth lives together with the idea of belonging and man’s isolation inside its geography. The limits are often confused with the appropriation of an identity, of a recognition that is discovered inside time, sometimes outside it. The Sea, with a Ship; afterwards an Island (1999), is a work, this time a painting, although it would be more correct to define it a project, narrating an event which is closed in the strain of man’s venture: Donald Crowhurst’s venture, as well as those of William Herzog, another great artist depicting the dilemma of human limitations,who travels the world with his ship, then jumps into the water and dies holding tight his stopwatch.

Tacita Dean tells us about the limits of this venture, the tension within it, its madness, its exceptionality. She describes it through lines, with a classicist stroke that maybe more than the venture itself can clearly define the reliability of a project in its evolution. Such an incredible action carries inside the tragedy of the failure and the impossibility to pursue: the sea becomes a myth generating madness, pushing beyond the limits of the mind, in the clearing of man’s struggle.