The Ecology Of Laboratorio Elettrico Popolare 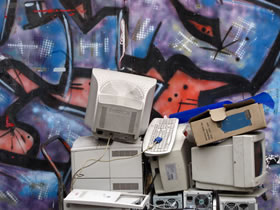 He won’t have it, he really doesn’t like me calling him “Master”. Peppo Lasagna is in principal a modest person, absolutely coherent in his being “ecological” and in his relationship with the world, the environment, the technology that surrounds us. In principal, he’s one of those people that does not bask in compliments or in the awareness of his own knowledge, but prefers to act, to do, to create.

Peppo Lasagna is one of the key elements of the relationships between the history of the hacker movement in the Milanese scene of the past 10 years: an atypical hacker at that, because he isn’t very interested in digital technologies or the potential of codes, but rather the safe-keeping (and distribution) of analogical, electronic, electrical, and radio technologies (and if there must be a code, then it should be DOS: for everything else go somewhere else). The workshop that Peppo Lasagna held with Tonylight as a Popular Electronic Workshop on the 18 th of April at the C.S.O.A. Cox18 Calusca Archive during the audiovisual experimentation and research event Exploding Cave, was an almost unexpected public success in the era of digital interactivity, of open source hardware, of generative software.

Creating sounds (and lights) by modulating audio signals coming from the overlapping of different radio equipment, playing with electromagnetic waves, exploring the determining effects of various types of electric circuits, understanding the physical phenomena that are behind the modulation of a signal, recalibrating pre-printed disks of old electronic equipment according to the creative demands necessary: this and much more was included in the workshop held by LEP in the Exploding Cave.

A kind of knowledge for which there is no upgraded manual for contemporary creative requirements. A technology that if understood and known critically, brings with it possibilities for political and creative action, only comparable to those of great code developers. It also has a great environmental and economical impact, thinking of the possibility of re-using polluting technologies that most of us usually just throw away. A science that now belongs to the few, and that without a doubt should be shared further, like those recipes that are passed down from generation to generation.

Peppo Lasagna, through Laboratorio Elettrico Popolare and the collaboration with Tonylight, has been doing all this for years, independently: from LOA Hacklab of Bulk “The self-managed farmstead Torchiera without water”, from Hackmeetings to the Otolab collective (the mechanical and electronic instruments used by the collective in the much acclaimed project “Hypnotic Circus” (Circo Ipnotico) were his, for example) to the last stage with Cox18. For all these reasons Peppo Lasagna is, in my opinion and as much as he doesn’t like the word, a “Master”. For his capability of transmitting knowledge, for his innate “you can” (whoever teaches knows what I mean), of catalysing the attention of people who work with him, for his being one of the last keepers of magic that are still around.

Marco Mancuso: Peppo, how was the workshop in Cox? How did you get on and what feedback did you get? Can you summarise, for those who weren’t there, what you did and what projects you showed to the public that came to see it?

Peppo Lasagna: Well, the experience was great! There was a lot of involvement of the people present and despite the quantity of people we managed to fill a couple of tables with some of our projects. We purposefully chose some “incomplete” experiments to be able to intervene on the circuits directly using crocodile cables to make the connections: we had a relay sequencer, and some “passive synth” modules ( a machine that produces sounds without using semiconductors, but only using “passive” components such as resistances, condensers and inductances, in other words the synth that could have existed in the 1800’s). Then there was the “Tappetofono” (The “Rugphone”), based on an old electronic organ disk from the 70’s that is played by touching the contacts with your fingers, the RDS (dirty digital delay), an audio effect that uses a PIC and an old simm 256K disk recuperated from an old PC. All this is created almost exclusively from recuperated materials. Our latest projects were created in a small series and are the Leploop, an analogical device, a synthesiser-drum machine sequencer and the Videomoog, which is at its fifth version. We had some radio devices with which we developed waves that bounced between the local oscillators, which were generally used as an immediate sound source for the experiments.

Marco Mancuso: L.E.P. is, by definition, “recuperated hardware, programming on naked metal, obsolete technologies from tin openers to the radio to television to supercomputers”. I believe that the success of the Workshop in Cox and the fascination exerted on the people present were quite explicative of a general tendency of “rediscovery” of electrical and electronic technologies. What are you thoughts about this: in other words, you know the latest stages of technological development, of hardware and software, what are your thoughts about this attitude toward the co-penetration between technologies?

Peppo Lasagna: The distribution of technological knowledge and self-building were had their peak in the 50’s and 60’s in terms of electronic technologies: back then the market was full of boxes for people to follow instructions and build their own stuff, and amateur magazines that brought technological knowledge (with less filters compared to today) that was readily available. The resources were scarcer, but the transmission of knowledge was easier. Then with the evolution of the complexity of circuits and growing electronic consumption, the knowledge of basic phenomena withered away and the level of “fiddling” was raised to levels that don’t implicate the contact with “naked metal”, but instead with mouse and keyboard, networks and wi-fi. It’s another universe of knowledge, that has little or no point of contact with what’s behind it but without which it could not exist.

Marco Mancuso: A clear sensation that was felt in the audience was this strong detachment between forms of knowledge: even if the audience were “fiddlers” and programmers, your level of knowledge of hardware, electronic and electric, is enormous. It almost seems to be a legacy for the few, a kind of art that risks extinction faced with the development and potential of computers. How do you feel about this: do you like teaching and giving your knowledge, do you expose it willingly to others, and how do you bring it into Otolab?

Peppo Lasagna: I would love it if certain types of knowledge did not just remain inside the r&d workshops of multinationals but instead were shared as much as possible, in different contexts. In terms of hardware development, the obstacles to overcome are many and immediate success is scarce and this tends to discourage people: obviously in an afternoon in a workshop it is not possible to begin a new project and finish it, especially if you need to coordinate a lot of stuff and between different people. We hope that in the future we can have a permanent lab where we can experiment and develop new projects collectively.

Marco Mancuso: L.E.P. has always had an evident anarchic political approach. The Workshop translates its knowledge of applications that are useful in the creative environment but also and most of all in a political, social and class environment. What changes did you see in Milan in the last few years in terms of workshop spaces, shared energy, the will to value technologies that you provide? And what do you think is happening today, it seems to me that there’s a new buzz in town, don’t you?

Peppo Lasagna: The experience in social spaces in Milan followed the evolution of technology exactly as it was perceived outside. The divide between state of the art and the level of resources used has been reduced and if before it was easy to find old beaten-up PC’s now people aim much higher, and want the best and the newest they can get. This causes the same problems, the same advantages and the same risks that there can be in any other place: if internet has allowed us to change our way of facing technology, of augmenting the level of communication and visibility of realities that would otherwise be marginal, it also made us abandon everything that was enough before in terms of most needs, it’s more safe in terms of control and repression, more targeted to resolving problems. It has made us dumb with redundant and often useless information.

Marco Mancuso: With the project “Eterete”, the idea was to build a de-centred and interactive network of radios, which followed the discourse of TazTV. As you state in your introductory text, the idea is to be able to facilitate and build a network of radio transmitters at high frequency that cover a restricted area, together, based on a transversal cooperation between associations, movements, collectives, and single individuals. Have you ever created this project and if yes, how long did it last and how was it developed? Or, if you have never created it, why is that in your opinion? Could it be proposed again today?

Peppo Lasagna: We did some sporadic experiments, even if it’s difficult to evaluate what response we had. There were technical problems and legal problems as well as the gradual and inexorable passage to digital transmission. I think that the more time that goes by, the more difficult it will be to re-propose such an experiment if not on a very small scale. I feel that interest has been lost, as the growing number of wi-fi networks and mobile phones have captured people’s attention.

Marco Mancuso: In your statement written for L.E.P., you say, “the prospects that we find ahead of us are catastrophic to say the least, technology chases itself getting closer to that fractal abyss that is comparable to a black hole like a precipice is to a waterfall, before we go beyond the horizon it would be a good idea to find shelter, when the last hard disk will be full of that shit that they dare call software how will we free ourselves from all the waste that we have accumulated along our path? When the markets of losers will be saturated with multimedia and 3D engines, when the network-eating network will drown the universe like wild sewage, when the brain of the last engineer will be mush because of the mechanisms of logic, who will save us?”. … it seems that in your proclamation, there is an environmental issue that is very interesting, be it from the point of view of pure hardware that should be recycled, be it in terms of software pollution, pollution of data, of information. Do you think that this is a problem that we will face soon?

Peppo Lasagna: The text of the proclamation sounds apocalyptic, but it’s true that I do not believe in the sustainability of the situation that has been created. I think that the higher we go the more we will get hurt when we fall. The current crisis, the global warming alarm, a greater attention to environmental impact in our activities are perhaps changing this situation. Now there are a lot of concepts of clean energy, zero kilometres, CO2 emissions that weren’t even considered before, even if they are still not considered enough. In the meantime the latest versions of hardware and software chase each other and force us to use our resources at an increasingly faster rate: this creates interesting waste, but it could suffocate us one day….