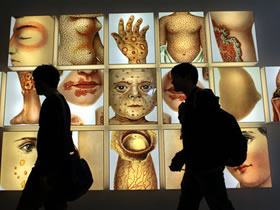 The magical capability of the director of the Science Gallery is owed to the exhibition “Infectious: Stay Away”, if it’s true, it’s opening took place some days before the global alarm associated to the diffusion of the pork influence.

We don’t know if this correlation will bring light or cast shadow on the exhibition prepared in the fascinating space in the centre of Dublin. What’s certain is seeing a building barred by a yellow-black cross banner, decompression chambers, and controls in the entrance make a great effect. Today, more than yesterday. Improvisationally, a real murderer gets around in the house of horror of the playground of periphery.

The Science Gallery remains as an enigma for those who write. It’s identity, even though very easily perceivable, slips. Not a scientific park, not interested in publication of the pure scientific editorial, not a museum or a contemporary art gallery. Probably the Science Gallery is the paradox of common sense, the charming valley that the rivers of private and public financing run toward. Playing is prohibited to those under 18. The Science Gallery is the terrain in the middle of art, science and entertainment, born thanks to the intuition of Professor Mike Coey, eager to make a project capable of to bring the public closer to the science and new technologies in parallel to the development of the field of research concerning nanotechnologies. For this reason, walking around the Science Museum, you can find a bit of everything: a designer who talks about science, an orchestra conductor which composes a viral music, a bar tender from Bassano del Grappa.

During the visit to the exhibition, I am accompanied by Michael John Gorman, the director of the gallery situated inside the Trinity College of Dublin, a campus capable of involving more than 15.000 people. The exhibition Infectious is unveiled by reclaim of modernity: stay away.

The place has encountered a glaring packaging and it has been put upside down by a virtual quarantine. In the entrance, after a profound medical visit, you’re provided with a chip, which traces the position of the visitor during the movements in the gallery. The contact with the infected people will later be displayed by this device, which shows the infection.

“Infectious” is an exhibition, which explores the social cultural and virtual mechanisms of infection, and the strategies of its containment by science and art. These strategies contain the simulation of pretentious epidemics in real time, and for the joy of the communication division, also the real time monitoring of an epidemics.

From science to fashion: Susie Freeman and Liz Lee have made a cloth composed of the fragments of a book which illustrates the protection we’ve developed to protect ourselves from infections. Alo Allik, Annika Koski, Simon Jermyn, have tried to develop an artistic project, which explores the possibility to create a continuously changing art piece.

The work of Vittoria Colizza, Wouter Van den Broeck, D. Balcan, B. Goncalves, H. Hu J.J. Ramasco e A.Vespignani is instead related to the communication society, and explores how the ease of movement provided by air transport is capable of carrying a disease to whole globe. The work of Gordana Novakovic deciphers the changes in images and sounds, which happen in the immunity system during the infection. Fashion, transport, music and also mythology: the work of David Bickley, Tom Green and John Mac Sharry transforms the work of immunity system into an audio system inspired in the style of epic Irish mythology.

At the end of the visit what remains is a sensation of bulimia to do, and the consciousness of the relation between the art, science and new technologies has taken a fascinating route, even though the intersection area between three territories is still full of weed. The multidisciplinary research increases the appeal, but under the heavy make-up of the research, the artistic shade and red lipstick, there’s still a young girl, who’s too young to leak into the party of the adult. Confused, nobody in the entrance has warned her, the exhibition is not advised against to those under 15.