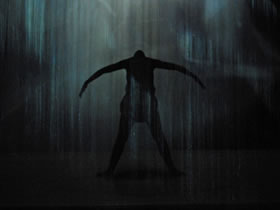 Their last work, “SEIGRADI, concert for voice and synthetic music”, after preliminary works, has taken on stage – in its final version first showcased at the RomaEuropa festival – the beauty of technology, its potential expressiveness exalted at its highest level, with an almost embarrassing perfection. A style machine. A technology of the ideas, a system full of existential metaphors. The show, awesomely beautiful and intense, and with an incredible perceptive impact, doesn’t have a traditional plot. The concept is an apocalyptic vision of the world: what would happen of life on earth if the temperature would rise of 6°C ? A warning to humanity that burns and consumes relentlessly beyond any precaution, a pre-alert of disaster, a forecast of desertification.

Everything goes by as showcased  by sensations and suggestions carried by a technological mediation (the live-processed video, images in 3D graphics, projections with holographic effects) and by body pulsing with light, absorbed in the natural elements like in Videodrome by Cronemberg. Bubbles containing images, binding themselves to the human in order to give life to shapes apparently real, tri-dimensional, but whose consistency is instead impalpable and abstract. We are in a possible-future universe where, due to the high temperature of Earth, what is produced by sight is more and more an optical illusion, a mirage. The brilliant study on light allows Santasangre to dematerialize on the scene the dancer’s body as if it was literally swallowed by the earth, only to have her reappear as the product of a dream.

The theatrical form is that of the evanescent, ghostly, unnerving and scary apparition of a body, between transforming lights and objects which have the same consistency than air, thanks to the projection of reflections. Materic evolution, chromatic evolution which corresponds also to aural evolution, through the 4 stages of air-water-fire and earth with its respective corresponding colors going from white and black, to blue, to white, to red (corresponding to earth).

In this balance, technology has become new flesh, dripping with blood and bio material: tangled in a svobodian weft, actress Roberta Zanardo – her body movements inspired by butoh – becomes herself light. During the show’s progress, a crescendo of de-materializations and births, of discovers (voice, singing), the theatrical form borrows the physical principle of mirage. When rays of light – due to the difference in temperature and air density – are completely diverted, it is possible to see images as if they were actually reflected on the ground. Technically, glass cages have been used to reflect the light coming from the video, and show them as an holographic mirage, capable of encrusting themselves onto the body and exchange their genetic material.

The musical score, divided into 4 parts  (from the four movements of classical opera, corresponding to the 4 phases of evolution) sets the pace of narration and choreography of the only woman on scene, who turns her back to the audience, a chameleon adapting to the mutant environment, almost motionless in the center of the scene, still in a muscular tension which also gives the proper emotional temperature.

We’ve had the pleasure to interview Santasangre, and we discuss their motivations, results and creative processes:

Annamaria Monteverdi: What is the starting point of “SEIGRADI, concert for voice and synthetic music”?

Santasangre: The thematic is strongly linked to the environmental issue. What would happen to this earth landscape if the temperature would rise of 6°C ? What would be the changes? We then ran into some key-texts – Aristotle, the first book of Physics, the transformation of matter, the value of elements (air, water, fire, earth); then Huxley, Brave New World. The dramaturgical line is connected to the four musical movements created by Dario Salvagnini as a symphony. Structurally, it divides into a first part, corresponding to formation of matter, of Air, therefore no voice nor body yet is there. In the subsequent movements, appears Water, and thence comes the body, inside an impalpable sphere. There is absence of voice, then a phoneme, then a word, voice and singing. And at the end, earth and the destruction with fire, and again rebuilding: the cycle.

Annamaria Monteverdi: How would you define it?

Santasangre: An emotional performance, but not sensationalist. We wanted to observe matter like in a microscope, take the infinitesimal particles to light, to the public’s sight and perception. The effect we wanted to reach was a rarefied environment, containing body and video image together. It is a kind of a choreography-sound experiment, where light sources, holographic images, sampled sounds on scene and natural elements make of the place a very large “magical lantern”.

Annamaria Monteverdi: The device is maybe the most spectacular aspect of “SEIGRADI”, allowing a video image to interact with the body. It is a trick coming from very far away, from the Pepper’s Ghost, where real actors, hidden, were projected with mirror effects on the stage. How were the video and concept of the device developed?

Santasangre: Through the years, video has always been present as a language in our studies, but we wanted to find a way to go beyond pure scenographic idea and form, towards if possible a dramaturgical form. The system is simple: the projection of reflection, through inclination of the glasses, acts as a mirror. There are 4 video-projectors on stage which are also the only light source of the performance. It is handmade, between light/body/glass. The 3D animation video is about water. Choreography was created starting from these collectively conceived images. Video on scene has two distinct roles: the first is to be a video-projected setting; the second is connected to the holographic body which represents symbiosis. The trick with the holographic body is that matter is of biological nature, but is depicted through mathematical formulas.

Annamaria Monteverdi: What is the critical threshold?

Santasangre: The final effect must be a perfect mix of body and video, so light, distance and positioning of the actress and the audience, have to be taken into consideration.

Annamaria Monteverdi: What about the musical part?

Santasangre: We widen the classical structure of symphony through which we create movements and timing of the performance. Music itself is a dramaturgical cycle, it sets the pace for the timing of the performer. It has 4 movements: an overture, an intro, a development and a final. The symphony represents the circle of life, and contains substantial changes between a movement and the next: it is a real score. In the first part, when life still doesn’t exist, voice is evidently missing, there is a sort of Big Bang: in the second movement there are only noises, singultuses, then the being comes to life and uses words and singing. It is a music written and fixed on the computer, but we didn’t use exclusively synthetic sounds, instead we also used classical instruments like cello and violin, wind instruments and especially natural sounds recorded and processed. Singing, when the voice arrives, was inspired by revised liturgical chants of 1200.