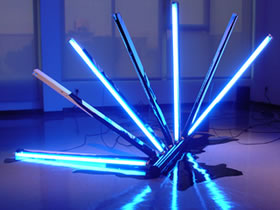 Last month Digimag devoted a section to Domenico Quaranta, curator of one of the two parts of the section Expanded Box at Arco Madrid 2009. Among the very heterogeneous works on show, encompassing different languages and media, one in particular represents in my opinion one of the exhibition’s highlights: the work “Every Man and Woman is a Star”, by the two artists Esther Mañas and Arash Moori.

The work, exhibited in the stand of the Ayuntamiento (organized by Madrid Art Council), is set within a precise and complex framework of artistic and contemporary sound research, devoted to the physical representation of the auditory experience, its visualization and concretization in terms of symbiotic relationship between the work, the audience and the surrounding environment. A “classical” audiovisual installation, consisting of sound and neon lights, in an interactive and synesthetic connection between sound and visual subject, but with a spatial element to it that clearly attest to a deep analysis of the location and how the public relates with it.

All the works by Esther Mañas and Arash Moori, ‘Composition for Five Rooms’ (2007), ‘Every Man and Woman is a Star’ (2007), ‘The Fly Killer’ (2008) and the more recent ‘Inside the Beehive’ (2009), reflect on this practice: works that tend to use sound as a sculptural medium to transform and interact with the perceptions of the visual and architectonic – but also emotional and social -environments, where they are installed. In other words, the artists consider all their works as vital steps to define and bring forth the their artistic practice, as each new work bears the echo and is simultaneously a distortion of the previous one, where various elements appear under different guises.

Marco Mancuso: Would you like to tell me more about you? How do meet you, when do you start to work togheter and which are you artistic backgrounds?

Esther Mañas / Arash Moori: Esther’s work previous to our collaboration had been concerned with a symbolism of architectural sites and the socio-cultural connotations ascribed within those. Her working method was to use the site as a support for an expanded form of painting and geometric abstraction, transforming the site into a representation of a fictional site through various forms of signification. The spatial exploration of work and changing point of view of the viewer altered and distorted the visual coherency of the space.

My background is related somewhat with sound, both from my involvement and collaboration within various circles of ‘experimental’ sound/music and from my fascination and use of sound as a medium within my artistic practice.  A number of early works realised were reconstructions of soundtracks for films made with the use of amplified domestic objects, orchestrated through real time actions. These works were concerned with an interest in a semantic ambiguity of sound via its dis placement within various settings. ‘Composition for Five Rooms’, 2007, ‘Every Man and Woman is a Star’, 2007, ‘The Fly Killer’, 2008 and more recently ‘Inside the Beehive’ 2009 are all works that we consider important and reflect the current direction of our practice. These works tend to deal with Sound as a sculptural medium used to interact with and transform perceptions of visual and architectural settings. That said we consider all of our works vital steps in defining and pushing forward the concerns of our practice, as each new work is an echo and distortion of its predecessor in which various elements reappear in different guises.

Marco Mancuso: You are an unusual combination of visual artist (painter) and sound artist (musician): many of your works are audiovisual artworks in terms of relation between sound and a visual element like light or painting. How do you think to be different and which is your potential refering to audiovisual artists working with audiovisual art?

Esther Mañas / Arash Moori: The foundations of our practice draw on parallel interests regarding perceptual and cognitive mappings of space which we believe transcend our chosen media and perhaps bring a coherence to our working methods and aims. Our practice seeks to explore the boundaries between which the experience of our work can be received and its recognition as an art work blurred by creating intimate immersive environments in which participants act on some level as co-creator, through spatial investigation and encouraging open ended readings of the work.

We appropriate numerous materials and found elements culled from our immediate environment altering and reworking them via various techniques of augmentation, amplification and magnification these strategies as well as the ephemeral nature of our installation work can be read as a reaction against an ever increasing commodified and market driven art environments.

At times we see our work as a form of expanded/personal film which perhaps takes some cue from structuralist/materialist film traditions, other times we see our work leaning towards certain tendencies in areas related to that of sculpture. It becomes quite a slippery thing for us trying to define our work as the parameters can vary depending on the nature of the site and the objects we find and appropriate, but there is a definite interest in creating malleable and personal works which are perhaps shared concerns echoed by some artists working in current audiovisual fields .

Marco Mancuso:  Your record player installations are complex works with a painted record, turning around a painting on the floor, with a strong optical and kinetik art attitude and aesthetic. Could you speak me a little bit more about it and what inspired the piece?

Esther Mañas / Arash Moori: Our record player installations are some of the earliest works and attempt to draw together various aspects of our individual practice through investigating a dialogue between elements of architecture and sound.

There have been numerous variations of this work as each one is dependant on certain architectural details of the site they have been installed within, informing the various sprawling geometric drawings that interrupt the path of working vinyl record players. It is also possible to relate them to an expanded form of cinema and early optical experiments with moving image, as rotating discs whose material image generates its own soundtrack.

These initial works can be seen to have informed the direction of   works such as ‘ Inside the Beehive’, 2009 in which architectural elements of our installation are utilised to generate sound, a  scenography creating its own soundtrack. A record player reappears in this recent installation this time reading a broken section of ceiling.

Marco Mancuso:  The use of light, the immersive audiovisual light environment, are not so common within the world of digital audiovisual art: I can remember the LSP project by Edwin van der Heide, the Feed project by Kurt Hentschlager with the use of strobo light, the one presented at Sonar last year, the one presented at Transmediale last year, Punto 0 by otolab and few others. Which are your references in the past and which are other inspiring artists for you today?

Esther Mañas / Arash Moori: References come from a variety of seemingly different sources and experiences and inform many aspects and directions of our working process,taking inspiration from a varity of areas and media which exisit outside that of various artistic frameworks. These can range from titles or lines appropriated from literature or musical sources. For instance our interactive sculpture of flourecent tubes ‘Every Man and Woman is a Star’,2007 was initialy concieved and based around a quote taken from Alesiter Crowleys , ‘The Book of the Law'(1904). Other such experiences and inspirations may come from just listening to a record or finding discarded materials in streets or markets.Work presented for Expanded box, Arco09 draws upon disparate sources such as the films of Victor Erice, Constant Nieuwenhuys’s ‘New Babylon Project’ , a satirical poem by Bernard Mandeville to found structural materials.

Also an important inspiration for us are the personal interactions with people whom we meet and whom are active on some level in realising various independant artistic activity’s. Some direct artistic references and inspirations both past and present would be Christina Kubisch, Erkki Kurenniemi, Stan Brakhage, Æthenor, Thorsten Fleisch, Peter Tscherkassky, Andrei Tarkovsky to name a few.

Marco Mancuso: You usually work with the space. With a specific site in which the artwork will be installed. For this reason, you use dark ambients, you work with interactivity and proximity, you distribute speakers in the space, you use strobo and flash lights to create an augmented light ambient , and so on. How is important for you the concept of space, and the ability to play with it and make it a part of your artistic process?

Esther Mañas / Arash Moori: Almost all works we make are reliant on the sites they inhabit in order to inform certain directions of the work either utilising found structural or material details, to the social-cultural connotations ascribed within a site.

Its an integral part of our work to utilise such concepts of space that you mention, especially regarding pre-conceptions pertaining to how a site may be perceived or utilised culturally. Thus for us it is always necessary to allow a certain elasticity within our working process in order to allow for these elements to inform certain directions of a work. Its a similar process adopted when working within our studio, in which a host of unexpected possibilities and working directions appear when working with or augmenting found materials.

More recent works can be seen to take a different route via seeking to construct sites within sites, which on some level are parasitic in nature and strive for a certain amount of autonomy or independence from the site they are installed, ultimately though the working process is quite similar as space for us is utilised as a material element of within our work.