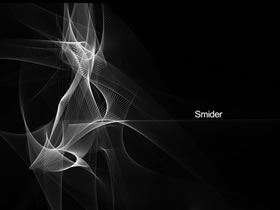 The “Do-it-yourself” practice amongst young electronic artists seems to be increasingly popular, as is the crossing-over of expression and the convergence of media used. We could say the result is something that always has an aspect which is virtually three dimensional, configured as a usable space, created by the convergence of sound, images and live influences.

Those who are passionate about and work with music, therefore, who adopt digital instruments, with an obvious spirit of shrewd desire and experimentation, cannot conceive sound connected directly to its visual influences, through its capacity to create spontaneously in a vital almost organic space, most of all in the case of those who work with music and applications generated in real time. Sound, images, live influences, the search for spontaneity of synthesis of these elements, build terms of a new modality in the way to approach “music”.

his is clearly visible in the work of a young Italian artist, Guido Smider, who deals with sound in a coherent and confident way, working with sound on video, researching new chemicals of synthesis and creating new software for the generation and elaboration of these elements. Guido Smider, after a first approach with analogical music, is interested in the synthesis of sound and sound samples, as well as applications in real time, creating software and installations based on randomised and generative music. With his vocation for developing do-it-yourself ways of creating software for the elaboration of audio/video, we suggest his most recent work, “Noiseplug”, and the exhibition installation work “Neural” is just as interesting, created with Lorenzo Fernandez. He has recently published an EP with Belgian label Anoise, a soloist with Beatpick and another with an American Net Label called Noise Joy. Without further ado, let us speak directly to the artist in this long interview.

Teresa De Feo: Your profile states that you started with purely analogical rhythms. Where does your interest in electronic music, especially randomized and generative music, come from, which pushed you to create new software in order to compose your songs?

Guido Smider: After some years of studying drums as a teenager, I was forced to quit because I had acoustic problems connected to my domestic situation. So I began to get passionate about synthetic rhythms and electronic sounds thanks to having bought an analogical synthesiser and a computer. I applied to the faculty of Music & Computer Studies in Milan and I gave way to my passion for DSP and synthesis of sound through the help of theory.

In fact I believe that the computer is a fantastic means to generate shapes in sound waves and complex sounds, but the commercialisation of software and sample packages is ironing out the world of electronic music; in a way it gives everyone the possibility to make music, but on the other hand it is detrimental to any kind of originality.

I think it’s difficult to surprise someone with an attentive attitude to music today, much has already been said through musical language. In this sense, I try to build myself applications mostly so that I can create particular and noisy sounds without the use of pre-fabricated samples.

Teresa De Feo: Would you like to tell us about Noiseplug, the software you created, which is already well-known and appreciated by professionals of the sector?

Guido Smider: Noiseplug is a standalone application for the elaboration of sound in real time and for the creation of glitch and noise sounds, which are completely randomisable so that they can become semi-generative. It contains four samplers and some DSP plug-ins that elaborate the signal and give the freedom to play around with sound very easily by simply having a little knowledge about digital audio theory.

t was created for real time live performances, it cannot be preset and it behaves as if it were a musical instrument on a computer. I thought it would be more interesting to create live electronics where nothing is pre-fabricated, but everything is created by the musician at that time. I can tell you that the next version will be remote-control activated through the Nintendo Wiii remote.

Teresa De Feo: In your work your synchronic and influential excellence between sound and video image impressed me, in my opinion this is the area where your expression is at its highest potential. For a musician like yourself that comes from analogical music, in what way is the relationship between sound, image and sound environment interpreted and experienced?

Guido Smider: My work leads me to confront myself with the society in which we live in, which unfortunately is a society made up of images and not sound. It is therefore necessary, but also interesting, to work with unconventional images. The relationship between sound, image and video, in my opinion, must be synchronic and perfectly timed: it is important that the sound gives the maximum effect of the atmosphere and temporal evolution of the images in order to create surprise in the spectator.

Teresa De Feo: Sound is not just a temporal expression (as the first aesthetic indicated), but has its own space, a single capacity to create multidimensional and multi-sensorial territories and to establish this cross-over seems to be, in my opinion, the only principle objective of someone dealing with sound design and who works with generative and electronic music. Do you agree? What does this add to analogical music in terms of expressive possibilities open to new media in the music field?

Guido Smider: I certainly agree and I can add that the sounds and many of the exhibitions that we do today are possible thanks to digital music. The accessibility and programming of objects have given a strong push to the creative technology of the year 2000. If you think of Arduino for example, or the development through languages such as MAX/MSP and Processing there are infinite possibilities of creation that new software put at your disposal.

Teresa De Feo: This music, generated immediately, suggests a relationship with temporisation, through its spontaneity and its chaotic and unpredictable lines, which is not just dynamic but also morphological and exists in living organisms. How do you feel about this?

Guido Smider: In generative music, the composer plants a seed that then develops independently (Techstuff) and this is closely connected to the evolution of living things. I think that chance events in time and in space are random, in part retraceable to a series of events that are closely related to one another. It was interesting to analyse the complex theory of stochastic processes simplifying it for my own purposes and imagining a close correlation between temporal events that follow one another, so that I could try and create two generative modules that can sound out in unison through a controlled fortuity.

Teresa De Feo: Staying with this subject, the relationship between generated music and living organisms, can you tell us about your most recent project created with Lorenzo Fernandez? I’m talking about Neural, a generative audio-visual installation, where you assimilate the spectral lines of sound through the activity of nervous networks modulated electrically

Guido Smider: The most recent work I created with Lorenzo Fernandez is a generative audio-visual installation based on the current OSC protocol to be able to communicate on two computers in a LAN network through control messages. The generative evolution of the video is connected to forces that attract the “cells” on the borders of the screen whereas the sound generates itself based on the calculation of the probabilities and some temporal counters.

The unpredictable evolution of the video and the sound generates simple shapes, connected to spectral sounds, which interlace through connections that emulate a nervous network. In the video there are light pulsations between these connections that are created through rhythms in impulse trains. The function of the Dirac is at the base of the modulated impulses and is strictly connected to the synthesis of the sound and the electric transmission between the cells of our nervous system.