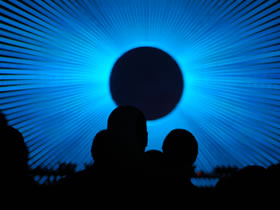 We are almost there. Next May it will be held in Montreal, French Canada, the tenth edition of the Elektra festival, not only one among the longest-lasting but also most interesting and impervious to time within the audiovisual art and live media festivals.

Those who follow and are interested to the festivals scene, especially those crossing various disciplines – experimental cinema, video, music, live media and digital audiovisual art, know well what I mean: although festivals remain in fact the most “comfortable” platforms where to attend concerts, experimentations and installations which investigate the artistic relationship between sounds and images – as well as to meet and confront with other artists, critics and curators – it is also true that this formula seems to have entered a crisis a few years ago, excessively contaminating itself with mainstream-event and popular exposition ambitions, and often inserting the artists in a perverse circuit made of tours and presentations of new projects, too dangerously similar after all to that of pop and club music.

While not sharing, in the meantime, the connotation that the appointments of contemporary art give to the “use” of the audiovisual experimentation, mainly for its spectacular and performative component, almost like an opening or like a “happening”, some festivals in the world are the exception because they have been pursuing for years an accurate journey of research, never trivial, crossing between storicization of an artistic movement of research about sound and visual, and analysis of the ultra-contemporary. They are not many, but they exist: from Sonic Acts to the Av Festival, to Futuresonic to Netmage in Italy to Elektra in fact.

I have always been bound to this festival – if we can still call it so, from their invitation in 2006 to the first International Digital Art Market (other extremely interesting and innovative initiative where critics and curators coming from the whole world, would meet for a few days in Montreal making contact with the centers of research in the city and comparing the respective projects and paths, thus creating possible collaborations), passing through last year’s partnership up to this important 10th edition of the festival.

10 intense days therefore, from May 1 to 10, for an articulated event through the 2 historical locations of the festival (the beautiful ex-factory UsineC, center of one of the most beautiful and well equipped black boxes that I have ever seen in my life, and the Cinémathèque québécoise) and 5 new galleries (articule, La Centrale , Skol, Pierre-François Ouellette and Lilian Rodriguez) and with the presence of over 30 artists that will be announced briefly. In  such a complex and articulated context, I will write in the name of me Digicult a critical revision of the event, through video recordings, interviews on the spot to organizers, artists and invited critics, as well as to illustrate the research and study activities of some productive realities of the city of Montreal as SAT (Societè for the Art Technologique) Hexagram, Oboro and others.

It will be finally interesting to activate a direct channel with Gregory Chatonosky, critic and Canadian artist, on the critical texts collected in the essay Angles_Arts numériques, which historically represents the first publication of Elektra on the thematic of digital art and of the audiovisual.

Multimediality therefore, but not only, electronic music, sound art, graphic design and video, audiovisual, installations and immersivity: all themes that have characterized Elektra since the beginning, and that from May 1 to 10 will be concretized as always through an out of the ordinary and brave program, that is inserted in a cultural and artistic tradition that makes of the Canadian city a neuralgic centre worldwide for the research on the new media and the expressive forms of audiovisual and multimedia works.