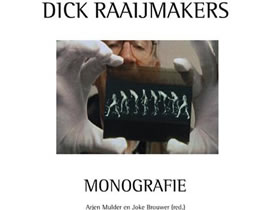 Rotterdam’s V2, together with Nai Publishers, recently published a monograph which presents an important in-depth examination on the Dutch composer, conceptual artist and theatre director Dick Raijmakers to the international public.

The work is called “Dick Raijmakers, a monograph”, and it is edited by Arjen Mulder (editor and author of plenty of books published by V2, such as “Understanding media theory”, one of the most precise books about media studies, published in 2004) together with Joke Brouwer. The monograph is a translation into English of a Dutch book already published by V2 in 2007. It is really a great opportunity for those who are interested in the trespassing of art into sound and technology, to enter the Dutch environment and piece together  through the story of of performances and visual art works realized Raaijmakers from 1965 up to now  a network of relationships and contacts which can explain, as a background, the artistic Dutch tendencies of the last 25 years, in particular in the area of digital cultures.

Maybe the book is not the first monograph published in the Netherlands about the pioneer of electronic and vanguard music, born in Maastricht and active from the Sixties’ in Hague, but it is surely the first important volume which collects all the documents and reconstructs the chronological path of his career, in particular concerning projects in the field of visual arts and theatre, as Mulder and Brouwer themselves underline in the introduction.

Born in 1930, Dick Raaijmakers is generally acknowledged as the father of electronic music in the Fifties’ but also as an ante litteram multimedia artist, specifically for his multimedia installations, which used music, dance and moving images, but also for his compositions and his theatre plays which were halfway between performances and scenic arts. From the second half of the Fifties’ up to 1960 Raaijmakers worked as a researcher in Royal Philips Electronics in Eindhoven, historic laboratory that, working for the famous electronics company which was not yet a multinational, accomplished and supported in the Fifties and in the Sixties’ all the cross field experiments by technology freaks, artists and musicians, and became the reference point for pioneering projects on the border between visual, musical and environmental installation.

Among them is worth remembering, a bit asynchronously if we consider the celebrations for the fiftieth birthday in 2008, the “Poème Electronique” by Edgar Varese, realized for Bruxelles International Expo in 1958 for Philips Pavillon. Since 1963, Raaijmakers has opened his research study on electronic music, and then he became, till 1995, Electronic and Contemporary Music Professor in Hague Conservatory.

His name is also linked to other events which are now history and urban legends. He and the Electrosoniks duet, founded as a game together with Tom Dissevelt, produced in 1957 with the name of Kid Baltan the first electro-pop hit in the history of music, “Song of the Second Moon” (http://www.youtube.com/watch?v=MSoAzONw-a4&eurl=http://video.google.it/videosearch?q=Song+of+the+Second+Moon&oe=utf-8&rls=org.mozilla:it:official&cl) , that was later defined by David Bowie as a “song that oriented my life as a listener”. It’s also David Bowie who some months ago asked V2 for a copy of the book, glad to have in his hands a monograph which collects the opera omnia of the artist.

The funniest story, anyway, is probably one which dates back to the Sixties and to the making of a science-fiction movie. According to the chronicles, one night in the composer’s house -who preferred a sheltered existence, away from the jet set and all the possible bothers coming from the external world, so as to have a life completely dedicated to his machines and his ideas – the telephone rang. Raaijmakers answers and there he heard his producer’s voice, who offered him to take part as a composer in the production of a movie for which they were going to start the set. A science fiction movie of a then still young director. That evening the director’s name didn’t suggest anything to Raaijmakers, who answered to this unexpected break-in of the external world into the quiet space of his laboratory, and definitely declined the invitation because he did not have enough time and because he was tired of making soundtracks. The director’s name was Stanley Kubrick and the movie was “2001: a space Odissey”. This is why, after 40 years, we can remember him as the man who said “no, thanks” to “2001: a space Odissey”, and who at the same time contributed to the creation of the science fiction imagery through his own music.

The book’s editors worked for years for the Institute of Instable Media in Rotterdam in Raaijmakers archive, in Hague, collecting old volumes and descriptions of works, photos, correspondence, draft works, documenting the steps of the projects’ development and above all drawings and scores, that the artist used as primary models for his works’ development. Pages and pages of geometric signs similar to scores, where the musical language is substituted by successions of signs and sequences of symbols which make the artist incredibly close to other contemporary artists who in the Fifties’ worked on signs in the field of Informality.

After a short introduction in which Mulder and Brouwer explain why they made such a huge research, in particular relating to the present time, the book  rich in graphics, manuscripts and photos- offers in chronological order a set of files on Raaijmakers’ main works in the area of what can be called “extended performances”: a stage, dancers and actors, machines producing music, animations somewhere between traditional and abstract cinema. Body, sound, movement, light and images are the constitutive elements of the “real artistic work of our times, which enters the empty space of the world and becomes transparent, in the sense of “not closed” and “open””, as Raaijmakers himself writes in one of his theoretical texts, that is to say “The Great Plane“, published in 1992. “An interested observer can enter this open work without leaving his viewpoint. He shouldn’t move around the work, because the work itself moves in front of the observer’s eyes. Real art unblocks space, it creates space.”

An almost didactic volume, actually offering as its most important and central part the work’s descripition, sometimes with the help of English translations of critics texts written by Raaijmakers himself. The second part of the book, together with a wide, discussed bibliography and an artist’s biography, ends the volume’s path with a set of critics texts by musicians and historians, which are the only really theoretical contribution to a full-bodied and important volume. Among them there is Frans Evers’ text. Frans Evers is a psychologist, vanguard educator and scholar of the synchronic relationships between sound and image.

The Netherlands, in the last two decades, have been developing a fertile and prolific research in the field of art, technologies, music and media, widely supported by local institutions from an economic point of view and as for cultural politics, and this is mainly because starting from the Sixties’ and up to nowadays Raaijmakers has been researching, experimenting, producind and writing in his studio in Hague. Evers in person is the one who states this, during a long chat about Raaijmakers I had with him when I was working for this book’s review.

In 1990 Evers established and managed with Raaijmakers The Hague Image and Sound Interfaculty, a department which would have been active till 2007, and which was born from the collaboration of Royal Conservatory and of Royal Art Academy of the Dutch capital, as an innovative educational project intended to train artists who would have worked in the area where visual and musical research melt together. A study centre where music education is joined with visual art education, supported by theoretical studies which focus on the synesthetic interaction between sound and image, its environmental, spatial, almost architectonic characteristic, which is able to involve the observer’s senses.

For almost twenty years the Department, which is now known as Artscience and is directed by the artist and curator Joost Rekveld, has been training generations of artists, composers and producers in Hague, who work in the field of media, in the experimental and creative use of technologies and in the synestethic union between sound and image, in the construction of environments in which the intermediate state of the creative process generates a physical and psychological involvement in the observer. It’s enough to say some names to connect the context to projects and people, in order to know why the Netherlands are the hard core of experimentation in the field of art and technologies, in a traditional cultural context where industries like Philips and artists like Raaijmakers have actually directed our attention to these themes, the first one by supporting creativity and the last one by training

Telcosystems, Gideon Kiers, Lucas Van Der Velden (also Sonic Acts Festival Director), Joost Rekveld, Edwin Va der Heide (who is also a Department’s Professor), the founder and curator of Transmediale Club Schuurbiers, Boris Debackere and others : an entire generation of artists, curators, promoters from Benelux’s area who are now active in the main contexts concerning new media in Europe have been to the Interfaculty founded by Raaijmakers and have learnt to think audio-video, to work in collective and laboratory contexts, to imagine through senses.