Cristophe Bruno: From Dada To Google 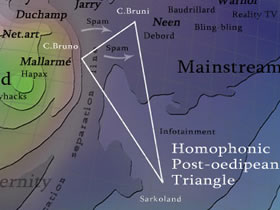 Christophe Bruno – whom I previously interviewed in Digimag 25 (http://www.digicult.it/digimag/article.asp?id=836), is one of most known net.artists worldwide. Lucid, ironic, desecrating, he has faced since a long time issues related to language commodification and control by late-capitalism, from “Society of the Spectacle” to “The Age of Access”.

For the “Google Adwords Happening” , online performance consisting in a poetry advertising campaign through the renowned adwords system, he won a honorable mention at the 2003 Ars Electronica. The project, whose subtitle was “How to lose money with your art” , tried to subvert the crux of contemporary art, increasingly market-oriented in the controversial “age of mechanical reproduction” currently in its advanced stage. He was censored by Google – he will explain why in this interview – and his advertisements remained online only for 24 hours. Nonetheless, 12.000 visitors saw them. Words are cloned, emptied, monetized. Words are controlled, induced, counterfeited. Welcome to “semantic capitalism”, last step of a society which seems to vampirize all of our thoughts, dreams, desires.

“Dadameter” is the title of his last great project, currently exposed in the virtual space of Jeu de Paume gallery in Paris ((http://www.jeudepaume.org/?page=article&sousmenu=107&idArt=788&lieu=9). It is a satyrical display of the “decay of the aura of language” – as the subtitle recites, with a clear tribute to Walter Benjamin – elaborating a cartography of words stored in the Internet to measure our distance from Dada. It was indeed Raymond Roussel , eccentric writer much loved by dadaists and surrealists, who inspired Bruno. His theatrical works, entirely based on combinatory word games which reveal the ambiguous, evocative and playful side of language, seem to precede somehow the mechanization of language that would have acquired different meanings after a century: “from Dada to Google”.

This project stems from a six-years process and it required the elaboration of a complex software, realized by the mathematician and programmer Valeriu Lacatusu , Bruno’s co-worker also for Logo.Hallucination. The engine scans the entire database of Internet language – only in English – and analyzes it in terms of homophony, equivocation and semantic relatedness (this is also called Google Similarity, because it measures how many times a couple of words appear in the same webpages in Google searches).

The result is a Dadamap that visualizes and interpretes our language from a satyrical standpoint, trying to measure our distance from Dada. In other words: how much energy, evocation, ambiguousness, poetry remains in the pay-per-click language of our times? How much time do we have before being definitely swallowed up by the universal boredom that leaves no room for irony? We talked directly with Christophe Bruno about “Dadameter” and its conceptual and political aspects.

Giulia Simi: Can you tell us how Dadameter was born? What was the starting idea?

Christophe Bruno: The idea of the project goes back in 2002 after I did a performance called the “Google Adwords Happening” where I realized that our ultimate atoms, words, had become a commodity: any words of any language has a price fluctuating on the global market of “semantic capitalism”. It became clear to me that the economic dynamic of such global corporate structures was to build cartographies of thought in order to be able to predict our behaviour as consumers and optimize the Adwords system.

I decided to try to see if it was possible for me to build such cartographies but that time it was too difficult an enterprise because it involved quite complex mathematical and computing tools. Later I met a mathematician and programmer, Valeriu Lacatusu, thanks to whom the project became feasible.

But it’s only in 2006 that I had the idea of linking the concept to the birth of Dada, through the key character of Raymond Roussel. The mechanisation of literary production developed by Roussel in the fields of homophony and equivocation, was echoing the enterprise of “taylorization of discourse” that Google had started in the field of meaning.

started to ask myself crazy questions such as what is the density of dadaism in language? The size of the region of language where homophony and equivocation are important, would in a way provide a measurement of our distance from Dada. That was the starting point of the project.

Giulia Simi: As you well explain in your video interview for Jeu de Paume gallery, the mechanisation of language (crucial concept in many of your works) has passed from a literary production – in Dada – to monetary one – in Google. What do you think about the future of speech?

Christophe Bruno: The “Dadameter” is subtitled “global index of the decay of the aura of language” and indeed my feeling is that there has been a paradigm shift in late capitalism in relation to the question of speech. The general picture seems to me as follows: in the sixties there has been a shift from the object to relations and flux, accordingly to the concept of “transfiguration of the commonplace” as well as to the transition towards the “age of access”. Language, as it is stored on the web, is nothing but the coding of all existing human relations and this panoptic structure has become part of a dispositive of global surveillance and post-control. This decay of the aura of language, or zombification of speech, may also be seen as a decay of the aura of the relational, and there is a paradoxical interplay between this “global text” and the performative aspect of speech. The future of speech has to be understood in this context of a global articulation between spectacle and post-control, between an absolute fetichisation of the relational, that counter-balance the decay of its aura.

he paradoxical fact that I was censored in the “Google Adwords Happening”, not because my speech was too meaningfull and outrageous, but because I had nothing to say (the clickthrough rate of my Adwords poetry was too low and therefore imperilled the market of language) is also worth to be noted here.

Giulia Simi: Google is often directly or inderectly present on your works, like in many net.artists’ projects. Maybe we can state that nowadays Google is almost a synonym of web. But did Google kill the web utopia? What the web would be without Google?

Christophe Bruno: The web utopia was killed quite soon, a bit before the burst of the Internet bubble, before the advent of Google. Google was one of the most important actors in the transition from web 1 to web 2 and what Google achieved is not the death of the web utopia. Instead they were born in the context of this utopia and tried to revive it ; because they used and perverted this very utopia in order to reach the ultimate stage of commodification. Indeed the ecology of free speech promoted by Google is nothing but the core of their economic dynamics.

Giulia Simi: This project has required a long and complex elaborating process. At the end, thanks also to the mathematician Valeriu Lacatusu, Dadameter’s engine is an interesting tool scanning the huge database of language on the net. Have you ever thought to use it for other purposes – sociological/political for instance?

Christophe Bruno: Yes, and I’ve been contacted by companies working in these fields. But the main purpose of the Dadameter was satirical. So I don’t know what is going to happen in this schizophrenic context.