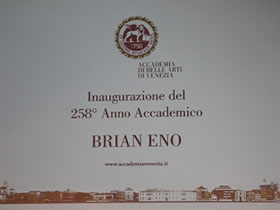 On Monday 16 February, Brian Eno has inaugurated the 258 th year of the Venice Academy of Fine Arts on the island San Servolo , where the principal courses of the school ‘New technologies for the arts’ are transferred.

I re-discovered Brian Eno as a future thinker, Brian Eno as composer and visual artist, Brian Eno as experimenter of art with his free-standing vision, the multi-disciplinarity, the meeting and integration between different arts. An example of this is his work in Long Now Foundation , a cultural institution born for promoting and diffusing the mentality of ”the slower/better” confronting the present mentality of ”faster/less expensive” in the arch of next 10.000 years. The foundation, in fact writes the years using five digits instead of four: 02009 instead of 2009.

I comprehended the success of an artist, which navigates through various disciplines without any subscription to a particular category and without having to judge loyalty to itself. A man who has always observed the world by his installations reproducing it by his meticulous orchestration of lights and sound layers weaved for creating a unique experience, for becoming an integrated part of a place, of a space ”Mental places in which, one may immerse”. Pioneer in tape-looping and of the other forms of sound manipulation, Brian Eno has worked with Rober Fripp in the early 1970’s , watching the traditional ”song” there, extending the composition to the act of the construction of sound itself. In 1975 Eno releases ”Discreet Music” , making the vast pop public meet a new musical genre called ”ambient”. He observed that the ambient music  different to the ”narrative” with a beginning, a half and an end  presents a stationary state . ‘It’s like watching a river. Music in which one can swim, float, loose him/herself. ‘

In the early 1990’s the ambient music exploded in lists, then evolving into new musical hybrid forms. Eno, has also been the pioneer in his research in sampling and in the use of the found sounds in ”My Life in the Bush of Ghosts” a collaboration with David Byrne (1981), years before that the world has been ready for all these . (I used the voice of an anonymous person, found voices were only voices transported in the atmosphere of that moment. (My life in the Bush of Ghosts)  Brian Eno)

Many years before, in the era of Margheret Thatcher  the English version of Silvio Berlusconi  the government has reduced the financing for the art schools saying: ”The artists are not important, the science, the technology and the defence, these are the important subjects”. Everytime a government makes these choices its message is ”We have to give up thinking the future”. It’s the beginning of the end of a society. This really means that the use of art, its aim and its function are not comprehended. Naturally persons that come from art schools, not only become painters or sculptors but also architects, graphic designers, textile designers, industrial designers. They become teachers, musicians – this happens very often in England.

I’ve calculated that as the system of education, the art school is probably the most efficient than any other means in creation of the income for a country. Therefore, I believe that, the existence of institutions such as Venice Academy of Fine Arts can be justified in economic terms. For this reason, I think that the real motivation is naturally different and has to do with ”imagination”. That’s what keeps that man different from other creatures of the planet, it is the capacities of imagining a future, which doesn’t exist yet, and this is so-called Imagination gift. We can constantly create new realities in our minds, we can experience and live in these realities. When a society looses its respect for this gift, development gets interrupted, progression stops.

The ”active” imagination is the thing, which makes us human, and it makes us capable of thinking a better future, of thinking the world in a new, different way. What’s we are asked to do is to try to convince the folk, and the government particularly, that all of this is important. It cannot be easily said that ”ok, Venice has always been a marvellous place where the arts were developed”. For the future of your imagination a place like the Venice Academy of Fine Arts doesn’t only mean 258 years of tradition, but also really means a hope for how it can be thought in future.

I like all the images related with the water, like being on a boat, this shell which we construct, enables us to stay on that magnificent material, which is the water and which enables us to float and to move opposite to it. I like all the places which are penetrated by the water and Venice naturally is a grandioso example of this. ‘, Extract from ‘Imaginary Landscapes’  Brian Eno

I started my life as a painter. Like the most people in England who studied painting, art and art history, I played in a band (Roxy Music). It’s for this reason that the English art schools really exist: sn order to create pop musicians (smiling), but this is a secret that the majority of the persons which work in art schools don’t know (!). I’ve never abondoned the painting experience, which probably always became my greatest inspiration.

At the end of seventies, I’ve started experimenting with the video and the light using both in a musical way, rather than simply as images. Slowly, I’ve taken the compostive process closer to the picturestique experience. Today,I’ve the possibility to say thanks to Gabrielalla Cardazzo, who gave me the possibilty to exhibit in Venice, for the first time.

‘I’ve never made a music in which I was interested only in an intuitive point of view. It has always been related to a certain theoretical position that I retained in that moment. But I believe that the music doesn’t have to show this and when you listen to it you mustn’t realize this. The real importance of the theoretical positions is that, they make you take decisions, which you wouldn’t take otherwise, which is the nice sense of avoiding to take. I wanted to separate the music from being an abstract collection of sounds and I wanted to keep it as a place where you have already been to, a place that you’ve known. In that period, I called these places as Imaginary Landscapes’  Brian Eno.

My work today, is supposed to be the half-way between the music and images. I continue to make hybrid experience in these sectors every day. From time to time, I teach in London at The Royal Collage of Art. The department of ‘illustration’years before. when the first computers appeared, suddenly it started to get bigger; and then it has been renamed as department of ‘communication’. Now it is studied by hundreds of students and it’s oldest and the biggest department of the Royal Collage.

This is before whoever decided to do something which is not considered in the category of painting, sculpture, art history, industrial design and others ended up in this department. It continues to grow. One of the things, which is always worth paying attention, is not to impose rigid borders when we try to make a new course. In fact, ‘Communication’ is only a word covering all the rest. And all the rest is what I teach now. All the rest is what I do now.

‘I create a completely imaginary environment for the music. The film  the thing around the music  rewriting the music itself. The consciousness which makes a music, a film music stimulates the imagination to think in a picturesque and scenic way, in order to connect the emotions of the film to the music. Giving up listening to the abstract piece and images that the situation belongs to. ‘ Brian Eno.

In one of my lives, I’m a discographic producer. This means being next to some of the best living musicians, persons that also use the traditional instruments like guitar, battery, bass, and so. Furthermore, in the recording studies I work with some of the most sophisticated computers on the market. I am very conscious of the possibilities of both: the musicians who cannot substitute computers, likewise; the computers, which cannot substitute the musicians. They have different tasks.

One of the interesting things, which I’ve learnt in 35 years of recording-studio work, is the expanding the possibility with the available technology. Let’s imagine a guitar with numberless switches we would pass most of our time exploring the billions of options on the instrument without playing the guitar. This is what usually happens with the technology, the persons try to learn what’s available instead of learning what can be done with it. Options mean the number of available choices. It’s very difficult to relate oneself with an unlimited number of potentialities. It would be like having a friend who behaves like a different person every time you meet him/her. With limited instruments, it’s possible to develop the relation with them, investing more time in the exploration of emotional possibilities. This is also valid for all traditional instruments of visual art.

In music, we’ve made an enormous step forward in the 20 th century with the intervention of the ‘recording studio’ comparable to the invention of the orchestra in 17 th century. A new form of art was born. Maybe we mustn’t call the ‘music’ by this name any more, we must re-baptize it, we must accept the fact that now different skills are necessary, different ways of listening. In the ‘digital’ world, now it’s like being in a tropical place made by ideas. In tropic places new forms of life come into the light: some of which survive and reproduce itself, others exist for a limited period and then they transform themselves into a different thing. In the same way, in the art there are always new proposals, some of which are destined to an important future, others to small niches. The good intuitions never get lost.