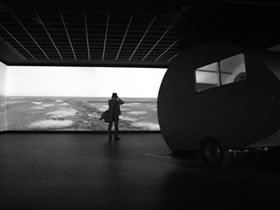 Transmediale’s 09 theme “Deep North” rotates around the concern about the planet’s climate change, and how this inexorable process inevitably has an impact on every aspect of the contemporary culture and society. “Deep North” is the starting point that opens the doors to diverse artistic interpretations, raising a whole range of issues translated and relocated into the language of digital art.

Second paradox: Where are the emotions?

In the exhibition hall, and in the foyer of the huge space, perhaps too dispersive, of the Haus der Kulturen der Welt (HKW – House of World Cultures) arranged for the occasion by the Berliner group raumtaktik (http://www.raumtaktik.de/), are exhibited the numerous artistic projects coming from multidisciplinary backgrounds. For an entire overview on the productions I suggest to check the Transmediale’s website that offers the necessary information about the artists and the artworks showed, which range from the mobile kitchen of “Specialità di Silicio”, to the equipment for the perfect squatter of “Field Notes: Forays into Cocoons”.

Among the projects I would like to highlight “Post Global Warming Survival Kit” by Petko Dourmana (http://www.dourmana.com/), an interactive installation that walks the visitor, through the use of infrared binoculars, inside a disturbing post-apocalyptic scenario, simulating a sensorial and introspective experience. A huge part of the programme is also dedicated to film and video curated by Marcel Schwierin and Florian Wüst, with about seventy productions chosen for the Transmediale 09 Award.

The festival turns around the conference (for those interested it may be listened on stream on the Transmediale web site), the debates, and the presentations that take place in the auditorium of the HKW, in the Cafè Global, and in the space called Digital Greenhouse, creating a forum for critical confrontation on the themes related to the healthiness of our planet, and in particular how art and technology could contribute to bring in the front page what before was just a prediction, and today has become reality: the planet Earth is in serious danger.

Transmediale and Club Transmediale jointly present the awaited audiovisual performance “Parallel Head”, the latest work of the Japanese artist Ryoichi Kurokawa (http://www.ryoichikurokawa.com/), interviewed by Bertram Niessen for Digimag17/September06 – http://www.digicult.it/digimag/article.asp?id=627). Ryoichi pervades the audience with images and sounds in perfect synchrony, creating a dreamlike and celestial narration of unique elegance reflecting the standards of the Japanese culture and style. Ryoichi plays with the inextricable interlacement between audio and video, gently wrapping the auditorium of the HKW in a soft and muffled cocoon.

Big expectations also for the Dutch trio Telcosystems (http://www.telcosystems.net/), creators of the official trailer for Transmediale 09; this year they also present at the auditorium of the HKW their recent work “Mortals Electric”. The performance is developed around a sonorous cathartic crescendo, accompanied by graphics that take different nuances, until it reaches the final part where the acoustic and visual impact charge the ambient of power, until it becomes quite unbearable for the human body.

Fourth paradox: the gift of ubiquity.

Transmediale crosses, with the risk of a crash, the programme of Club Transmediale, which this year celebrates its tenth anniversary. The festival, primarily focussed on electronic music, offers also a wide daily programme, with debates and workshops, under this year’s theme “Structures”.

The Club gives a dynamic impulse to the general bourgeois atmosphere, and a bit sleepy of the elder sister Transmediale, which seems to suffer, like many festivals of the same genre around the world, of a tiredness probably owed to the consolidation of a formula that now it’s almost obsolete.