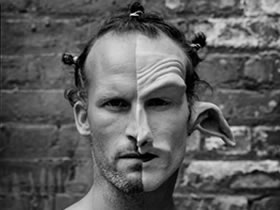 In Turin, at the Fondazione Mario Merz, a retrospective of one of the most visionary and discussed contemporary artists, Matthew Barney, has just ended. In a site-specific set, composed by 5 screens arranged in a circle and others following the site’s perimeter, Barney’s work was exhibited in all its spectacular mood and in its entirety, together with sculptures and drawings which guided the visitor to a better comprehension.

Matthew Barney is one of those few and long-awaited cases in which the difference between theoretic and artist becomes irrelevant. In some way, it grows rapidly into something aseptic and dull. Matthew Barney’s analysis has a plasticity and a mobility which makes it very similar to those books full of symbols and with mythopoietic orientation, in which the artist’s performance moves on the tracks of “Gesamtkunstwerk”, the total work. It is a space where funambulism is worthy and well tolerated, where imagination awakes neurotically among the references it has to start from. A space where, if you have not been warned, image’s description increases awkwardly the work’s structure.

As it should be done in every wide-spreading environment, and with all the risks that it implies, I will only point out the central aspects of the artists’ work and career.

The universe created or described by Matthew Barney starts from the idea that the mainstay of all its artistic evolution is the artist himself and his Body. Since the beginning, the Body, as an evolving machine, as a system in which the pivotal points of his poetics are realized, is the element from which everything starts and is realized. The Body’s continuous training, its exceeding among self-imposed forces, creates an hypertrophic state, where the matter it is composed of grows as an indeterminate and asymmetrical mass, out of its natural control. In this state of coerced evolution, Matthew Barney connects the metaphor of creation.

A work is created among psychophysical resistances of the artist. Every initial impulse (a raw and impure state) is followed by some opposing forces, which mediate and discipline this initial state. In the series “Drawing Restraint”, produced during the early years of research and study, the artist, physically “restrained” in different ways, creates drawings (or marks, at least), recording these operations with A/V instruments, as they did for performances in the 70’s, when they analyzed the frontiers of language in similar ways, though with different objectives.

In these video tapes the artist himself climbs on walls tied up by partially elastic ropes, he bears weights and body building equipment, so as to put himself to harder and harder tests, with the only objective of producing a drawing.

This early period’s production is not limited to recorded (photo and video) performances, but there are also drawings, sculptures, collages, notes. The elements’ complexity grew as the artist’s research thickened with references, following the body’s cult as a model of universal knowledge. “Field Dressing (orofill)”, dated 1989, represents a first step towards the construction of a personal mythology, initially linked to the work’s material (body- vaseline – resistances). In this dissertation, his last production from his education in Yale, Matthew Barney builds an action, in which the athletic activity is connected to symbology and rituality.

The artist crosses a room hanging from ropes, completely naked, so as to reach his own emblem realized in Vaseline, that he’s going to spread on every orifice of his own body. This work is the foundation for another work that will become the highest realization of his personal mythology, the work that defines in an “esoteric” way the theoretical and symbolic system of the “Path”. The “Cremaster Cycle” is Matthew Barney’s opera omnia, his most significant work. There are plenty of exegesis, theoretical dissertations and important re-readings about this work. It is the reconstruction of a visual universe, under the artist’s and his sign’s total control, where lots of characters are involved.

The “Cremaster Cycle” is a set of myths and models of the American culture, but, as well as it happens for the greatest post-modern reports, such as Pynchon, Delillo, David Foster Wallace, it is supported by any kind of cultural extract, such as Greek mythology, kabuki theatre, Freemasonry, vaudeville, shintoist ceremonies, esotericism and Nordic mythology. The biologic being, the artist, Matthew Barney, grows and models himself through fragments of modern and mythological history, among physical resistances, among energies invading his organic structure so as to become myths, example, human being.

Gonads’ initial movement is the cause for the initial choice of genre. Their movement decides the sex, their movement is the example for a resistance on which life is placed on since its beginning. Matthew Barney’s Cremaster represents the initial resistance during the moment of creation. Existence matures after this passage has been concluded and the unborn child’s genre is finally defined. He has been given all the raw material which will be the foundation of all his existence.

“Cremaster Cycle” is a huge fresco about the development of an a priori existence, the “es” central region, the principle of shape. In the five episodes it is made of, Matthew Barney as an actor plays lots of transformations, embodying emblematic characters, made up of lots of references. Beside the vastness of content, the “Cycle” utilizes a specific cinematographic grammar, shaped by a decidedly sculptural and rarefied use of time, by optics which alter perspective so as to get a greater involvement in the performance, and by a suggestive music, redefining the sound’s space.

The audience watches, beside the moving images, according to Barney’s initial production, a variety of sculptures deriving from movies’ set designs, some still inedited, drawings, display windows with objects linked to Matthew Barney’s imagery, such as ruins and extracts of an imaginary universe. These worlds’ traces left form the artist in galleries and museums, are the most vivid necessity of representing a universe, instead of making it live, of symbolizing a mythology, that is moving towards common directions but is anyway a closed, hermetic system, where reading can only confuse, rarefy, to the most rational definition.

Matthew Barney’s art is suggestive and leaves interpretation free to move, but at the same time, it keeps interpretation distant, disorienting it as it happens in the interpretation of a myth, the strength of which is in believing and seeing, more than in understanding.