The Artist As Artwork In Virtual World – Part 2 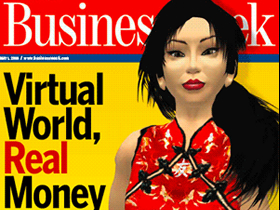 This concept can affect all sectors, not just the artistic one. And the good results depend on how people can work on their virtual (or avatar) alter ego. Aimee Weber and Anshe Chung (one of the most popular designers and the first millionaire of Second Life respectively) were successful not only thanks to their work and the contracts they signed: they’ve been able to play in an excellent way the role of popular designer and millionaire building speculator. A bad painter is a bad painter in Second Life too.

However, it could be an interesting project to create the character of a bad painter able to infest with his bad works the citizens’ houses.

Playing a specific role has been a popular strategy in contemporary art. Giorgio de Chirico, in all his life, played the ironic role of the conservative “Pictor Optimus”, enemy of every kind of modernism. Andy Warhol was able to successfully manage his public mask, like Jeff Koons and Damien Hirst. With Second Life you can create real identities that can become independent.

Here a Marcel Duchamp could create different and several Rrose Selavys; he can make them interact with us, and make them more real than himself. He can give them a (human, humanoid or totally abstract) body, a story, a behavior. In SL art what is important is the artist creation. Let’s see some examples.

Once upon a time there was an artistic group called 0100101110101101.ORG: a misleading name, that hid an ambiguous group of people. They plagiarized websites, misrepresented some organizations (such as the Vatican or the Nike), created new ones (Darko Maver), and interacted with people under different names every time. With their group of projects called “glasnost” (the first one was Life Sharing in 2000), 0100101110101101.ORG chose the digital transparency. Life Sharing allows everybody to enter their computer, shared online through a file sharing system, and to interact with their data: you can read their e-mails, copy their data and see what’s inside their folders. Someone considers it a “digital pornography”. The following project, Vopos (2002), allows to monitor their movements on a world map through a GPS system. 0100101110101101.ORG is now more transparent, but its identity is still incomplete. We have just some clues, some documents and data about their Darko Maver: but is all this enough to prove their existence?

In the following projects, 0100101110101101.ORG introduced two new names: Eva and Franco Mattes. Are they husband and wife? Are they brother and sister, or cousins? They have the same surname, but Eva Mattes is a German actress and singer, one of Werner Herzog’s muses… All these doubts about the new identity mean that it is still a “cultural construct”, an identity mask. They said: “Eva and Franco Mattes are a construct just like 0100101110101101.ORG, maybe even more” [14]. With Portraits, the Mattes became aware of the huge power of virtual worlds, the chance to make real these masks. And they became aware of their power. Watching Lanai Jarrico wearing the clothes she was wearing in 13 Most Beautiful Avatar s is like a revelation: she is saying that the portrait proved her existence. An avatar is real and not a projection of something.

Even Eva and Franco, in SL, need an avatar. This could seem bizarre, but it is a logical choice: “Since within virtual worlds you can be whoever and whatever, we find more interesting to be ourselves [15]”. Ourselves? They create avatar so similar to Eva and Franco Mattes that sometimes you can meet them in the real world: average height, thin and nervous body, a sober and dark outfit, black and unruly hair for him, long and blond hair for her. Does this mean “to be ourselves” in SL? I don’t think so. This means to transform your own body into a mask, and this mask into a new body.

In SL, Eva and Franco Mattes show the performances by Chris Burden, Vito Acconci, Marina Abramovic and Ulay, Gilbert and George [16]. They need it, otherwise they wouldn’t exist. For this reason the performances are a reflection about what happens to a performance when it is interpreted by virtual bodies, and about such physical elements as violence, decency and sexuality in a virtual world.

“My body can go barefoot, but my avatar needs Prada shoes.” [17]

Gazira Babeli is one of the many Second Life avatars who decided to hide the identity of their “real” alter ego: it is really frequent for ordinary people, but not for popular people who usually want to make clear who they really are.

This is because their popularity in SL can be a promotional means in their real life. It works for artists, and this is one of the reasons of Gazira’s interest in it. She is one of the most popular and estimeed artists of SL. Her ambiguous identity is one of the reasons of her popularity. She doesn’t use SL as a promotional means: it is her own place, the only place where she can exist. Her works help to draw her portrait and her personality  it is a rare case, since the avatar is often considered as a mere tool to interact with people and create works. Gazira is the irascible witch who unleashes earthquakes, throws pizzas and records, imprisons her audience in cans of Campbell’s Soup; she is the rebellious artist thrown out of the official art places. She is the only artist who broke SL taboos, she deformed avatars, literally “giving” her own body away and stealing other avatars’ skins.

n her isolated island (Locus Solus), Gazira is not so different from Martial Canterel, the bizarre inventor who  in Raymond Roussel’s novel [18]  creates new objects from creative manipulation of language. Gazira manipulates scripts and calls this “performances” (even if it is a sculpture, a painting or an installation). She experiments on her own skin her actions.

Unlike Gazira, Dancoyote and Juria are really different from their own avatars. These two artists developed, in different ways, a similar “formalist” work, focused on the exploitation of aesthetic and multimedia potentialities of this tool. They think SL is a kind of exploitable software and not a social universe to interact with. Maybe, unlike Gazira, they couldn’t understand that in a virtual world software and social universe belong to the same concept: creating an installation always means interacting with the world. Anyway, their work is appreciated by SL cultural elite and by the Lindens themselves, who think it’s the way to make their creativity dream come true.

In real life, Dancoyote Antonelli is DC Spensley, a not too young artist whose work looks like the late “cyberart” of the first 1990s: digital creations and three-dimensional software. However, in SL he is an avant-garde artist, and he recently collected his most important works in a futuristic museum. But we can’t say that his work improved just thanks to SL. By creating Dancoyote, DC Spensley made Philip Rosedale’s dreams come true. Dancoyote is a creative, imaginative and dynamic boy; he is aware of his own role and he can make his dreams come true because he understood that in SL “the only limit is your own imagination” (Does it sound a bit rhetorical? Well, it is one of Lindens’ mottos).

Juria Yoshikawa is definitely more modest. He appeared in SL for the first time in 2007, presenting her works almost everywhere. She transformed the three-dimensional spaces of SL into translucent panels and coloured lights losing the space sense, in a sort of visual digital nirvana. She is small, with Oriental features and light blue hair. For this reason some months later it was a surprise to find out that Juria is the digital artist Lance Shields, popular in the Japanese new media art scene since the first years of the 1990s.

Shields speaks of Juria in third person: “She inevitably chooses scales larger than conventional gallery work because she is interested in people experiencing the work in a physical way  flying through them, riding on them and socializing within the art. To Juria virtual art is about freeing oneself up to create in ways she finds impossible in real life.” [19]

Juria Yoshikawa and Dancoyote Antonelli don’t depend on their own creators anymore. It seems they have created a new kind of art. Actually, Juria and Dancoyote are the best work by two artists who understood the potentialities of a second life.

[16] – I’m referring to Synthetic Performances , a collection of re-interpretations of classic performances. Eva and Franco Mattes are developing it in Second Life.
Cfr. http://www.0100101110101101.org/home/performances/index.html

[19] – “She inevitably chooses scales larger than conventional gallery work because she is interested in people experiencing the work in a physical way – flying through them, riding on them and socializing within the art. To Juria virtual art is about freeing oneself up to create in ways she finds impossible in real life.” Cfr. http://memespelunk.org/blog/?page_id=39