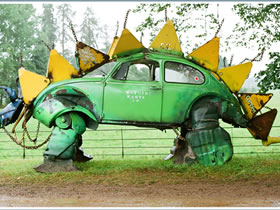 Santarcangelo is the venue of the most important and historic festival of research theatre, which was once just the festival of street theatre. And we were there! Also (and mainly) during this precarious edition, with no artistic director for the first time in its long history. We must report the valiant resistance of the actors of the now famous and historic 90s’ generation (Teatrino clandestino, Fanny & Alexander, Motus), but also of the 80s’ generation (first and foremost, Socìetas and Le albe).

The sensational withdrawal of artistic director Oliver Bouin, who was elected two years ago with a questionable competition and didn’t come up to the expectations and, even before, the voluntary withdrawal of vice-director Paolo Ruffini, left the festival in a fix, at the risk of cancellation, just a few weeks before its beginning. Part of the schedule had already been set up at the time of the withdrawals, but the general coordination, the organizing and technical supervision were missing. Someone had to intervene soon to decide what to do with the festival, which new advertising campaign to conduct, which criteria to use for the selection of a new supervision team.

Sandro Pascucci, the mayor of Longiano who was elected president of the board of directors of Santarcangelo, took bravely upon himself the burden of direction: in this situation of instability, he tried to involve the municipal territory and, above all, not to deprive the theatrical groups (that had been working for months on projects of production and co-production for Santarcangelo) of the love and support of the festival. Pascucci was an excellent host, beloved by artists and intellectuals, critics and journalists who rushed from all over Italy to support a monument to Italian avant-garde theatre such as Santarcangelo. All this happened in an edition that recalled the year 1978, an historic season, characterised by “third theatre” and the direction of Roberto Bacci.

The tenacious resistance that the groups put up on the field made the journalists take their side and intervene in an unusual way, with a cry against the logics of institutions and bureaucratic fetters, the same that would have decreed an inglorious end in Santarcangelo.

In a section named “Power without Power” and renamed, in an amused tone, “slow release”, before each performance in the two weeks of scheduling, a microphone was switched on and renowned critics or artists could give their personal opinion on what to do with the festival, on its meaning and on how to work for a new artistic direction. The voice of critics and their presence influenced this season more than expected. Somehow it was “their” festival as well.

Oliviero Ponte di Pino, before the Teatrino clandestino’s performance “Candide“, declared that within the Italy of festivals, where science, maths, art and mind are celebrated, Santarcangelo should host a festival of freedomIn a polemical tone, he asserted that, since the budget allocated for real, important festivals such as Santarcangelo’s grows thinner and thinner (sometimes the budget is cut by 70%), we should have the courage to close the unnecessary festivals, “one out of five will already be a result”. Roberto Latini, in his “slow release” in piazza Ganganelli, declared instead that there is no more need for a “direction” in the original meaning of the word, that is to say that the power shouldn’t be concentrated in the hands of one man who decides motu proprio the destiny of a festival. The collectivisation of executive functions as an alternative to centralising power is a beautiful utopia coming from far away, I don’t know how much it can be applied to a festival of theatre. A heated debate opens and spreads to the web with a radio live broadcast. Santarcangelo is on line from piazza Ganganelli thanks to the very active group Altre Velocità, which follows from close-by the most important research festivals. But, of course, which war can you fight with these technological means against some media giants! And still, this is resistance as well!.

In this situation, what is the use of avant-garde? When is the alternative culture that we follow, support and represent going to be more and more the culture of a silent minority, of an intellectual self-referential niche? These are the question Ponte di Pino asked in a polemic tone to the public in Santarcangelo. “Holiday festivals” host performances that would never see the light on the important stages of weekday periods; productions are born and die in the course of a few months; town theatres are hardly able to find their audience; the directors have goals based almost exclusively on the number of tickets they sell; market economy is the law, considering that the system keeps on using questionable methods for the allocation of funds and artistic directions and that some privileges and some privileged people remain unchanged; considering that we witness powerless the fact that the equality of opportunities is never considered, we can tell that the principle is past and it is though obvious that there is a need for new reference models.

From tomorrow on, we should try to understand, to tuck up our sleeves, to salvage whatever possible and to face the issue of memory at the festival, but also its present meaning. There are rumours that a plausible hypothesis is to entrust the main groups with the direction, year after year, in rotation: but will a year be enough to start a serious festival project? We strongly doubt it, as much as we doubt that a group could be super partes in the choice of the works and the companies to host. Personally, I still believe in the figure of the director with the right skills, with experience coming more from criticism and organisation than from being an actor, in order to resist the obvious temptations of the clash of interests. Of course, (s)he should be a person who accept to be introduced to new external realities, to start collaborations with international festivals, to guarantee continuity and life to the selected shows, beyond the period of the festival. Her/his commitment will concern also the visibility of the productions in the neighbouring areas, from Ravenna to Mondaino, which is at one hour from Santarcangelo. Of course, they are corners of paradise with little or no equals in Italy : long residences, funding availability for companies, guest quarters and every type of logistic and technical support.

L’Arboreto [The Arboretum] in Mondaino, with its charming theatre in the wood which has been specially built for this project, has been decisive for the construction of new national theatre realities. The theatre in Mondaino, which has grown exponentially in the last years as far as workshops, residences and scheduling suggestions are concerned, was born on the express will and passion of Fabio Biondi, a director really involved in facing with passion the issue of co-productions, of permanent training, of territorial and extra-territorial collaborations. In my opinion, he is the most suitable for directing Santarcangelo. The presence of days of meeting, debates (among which the one on moderate residences held by the extraordinary Piersandra Di Matteo di Artò) and discussion groups have increased the offer of this transition festival. The meeting on residences showed a beautiful model of productive hospitality and artistic sharing among Longiano, Mondaino, Santarcangelo: React!, which support the group Aksè coordinated by the Nanou group and ” Emerald City ” by Fanny & Alexander.

Beyond the opinion on the single productions presented at the festival, we saw a numerous and participating audience, a recovered crowd which sang with Gianni Casali the songs of the 1968 protest movement. Casali’s performance was lacking in rhetoric and derived from a smart theatre-song rendering of Mario Capanna’s book “Formidabili quegli anni” [“Wonderful, those years!”], enriched with songs by Boris Vian, Giorgio Gaber, Fossati. During the two days I was at the festival in Santarcangelo, Motus, Teatrino Clandestino, Mk and Simona Bertozzi, Pathosformel, Ooffouro were the groups that won the most praise.

But the whole scheduling, in spite of the precariousness of the situation, was really interesting, with Fanny & Alexander performing their new work for the first time, Kinkaleri, Paola Bianchi, Carloni and Franceschetti’s video-installations and Mutoid Waste Company‘s sculptures.

We report Motus’s continuity in the work of theatre/film creation ICS, a lacerating story of generation rage that is also the cry, not only symbolical, of this festival, orphan of a director but with still ideas, vitality and positive energy. God bless the festival!.