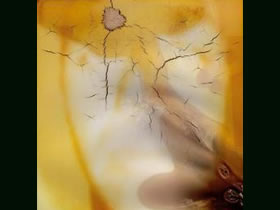 The Seven Words project was recently presented at the Chelsea Art Museum of New York, as a part of the Sound Art exhibition, The Sonic Self , with some guests as David Marcus Abir, Mikhail Acrest, Damian Catera, DJ Olive, Phil Dadson and Fiorentina De Bia.

The project is a musical work divided into three different moments ( 1.Untitled / Queer Space Symmetrical; 2.Kriya / At the End of Time; 3.Ophiuchus Improvisation / Queer Reflection Harmonic Minor ) with Robert Fripp‘s soundscapes recorded through Paul Amlehn‘s words. The new digital technology included digital delay devices, digital audio processors, and guitar synthesizers. The audio flow would typically be: A guitarist (e.g. Fripp)… The energy of which is transmitted to an electric guitar with a guitar synthesizer pickup/interface (e.g. the Roland GK-3) connecting to a guitar synthesizer module (e.g. the GR-33). The output of this being routed to a digital audio processor to add guitar effects to the sound.
This then is routed to an array of digital delay units (e.g. TC Electronic TC2290). The digital delays are used to create audio loops of various lengths of time. The common method being that one unit would be used to create one complete loop, then another unit to create a different loop. These loops would then be combined into the final audio output, being faded in and out by Fripp during the performance. The loops might not necessarily be heard during their creation, but may be faded in gradually. The audio from the digital delays would then be processed by more digital electronics (e.g. the Eventide Harmonizer), then becoming the final composition.”

The artists’ purpose is to create a perfect and powerful mixture of voice and soundscape, in order to catch the listener’s conscious and unconscious levels. The project was broadcast on several radio stations in UK, Australia and USA. We can’t fail to mention that this project has also an important humanitarian value, since these two artists decided to donate the earnings from the sale of a CD in limited edition to the Cork Street Charity Open Art Exhibition , that this year will help children infected with HIV virus.

Paul Amlehn is currently focusing on a new photographic project, Traum and Trauma, used as the visual part of his collaboration with the music of Robert Fripp. We asked him to tell us something more about Seven Words.

Giuseppe Cordaro: How did the The Seven Words project start?

Paul Amlehn: Across the sea of time and space. Along a thread of spirit and blood

Giuseppe Cordaro:  And how did you develop it?

Paul Amlehn: The project was developed according to its own laws, dictated to me in my various roles as servant, high priest, and receptacle, of the Magnum Opus

Giuseppe Cordaro:  How did you manage to work so far from each other? How was it working online?

Paul Amlehn: Any distance was transcended with the inevitable convergence of affinities.

Giuseppe Cordaro: Your purpose was to create a powerful mixture of soundscape and voice. Paul, did you enjoy working with sounds?

Paul Amlehn: Anything I said in regards to this question would only be a finger pointing at the moon

Giuseppe Cordaro: Robert, what is the positive element that voice could bring to your soundscape?

Paul Amlehn: In Robert’s absence, I’ll take the liberty of fielding this question, and my response is: a structure, configuration, or pattern of physical, biological, or psychological phenomena so integrated as to constitute a functional
unit with properties not derivable by summation of its parts.

Giuseppe Cordaro: How did you decide to broadcast The Seven Words on the radio too?

Paul Amlehn: Radio dissemination was one of the organic outgrowths of the project. The Seven Words will also be installed in galleries and museums; broadcast from an automobile mounted with bullhorn speakers driving through the streets of Yeosu in South Korea during the arts festival there; installed in sensory deprivation chambers and isolation pods in New York (at Blue Light Floatation) and London (at The Floatworks) so that individuals can experience the work in a theta brain-wave state, free of external sensory stimuli. I am also talking with scientists about transmitting the work off-world, several light years into interstellar space, an extreme gesture outwards as a counterpoint to the inner journey experienced in the isolation tanks.

Giuseppe Cordaro: I think it’s amazing that the earnings from the sale of a CD in limited edition will go to charity. How and when did you develop this initiative?

Paul Amlehn: Its immensely gratifying to be able to contribute something, in a concrete sense, to allay the suffering of others, especially, in this case, children with AIDS. Hopefully the work raises some money for what is a very worthy cause. The idea of the donation arose much the way the work itself did, out of a humanistic impulse

Giuseppe Cordaro: Are you working on some new projects, together or individually?

Paul Amlehn: At the moment, two projects: the first, an experimental film work, titled: Traum und Trauma (Dream and Trauma), which consists of still images from my photographic work and one of Robert’s soundscapes. It is in the final stages of editing as we speak:

Robert, as you know, is the founding member of King Crimson, and has played with musicians such as David Bowie, Peter Gabriel, and Brian Eno. Joan was the cellist for The Kronos Quartet, and has worked with composers such as John Cage, Morton Feldamn, and Philip Glass. Jim is the drummer from The Dirty Three, and has also played with Nick Cave, and PJ Harvey.