Nico V From Close Up 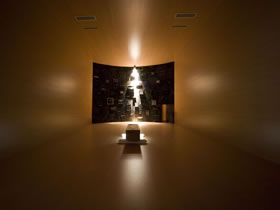 Nico, I don’t know what you think, but I quite liked the interview with Tom Waits, or rather the auto-interview, which was published a little time ago on the Corriere della Sera . Possibly, when in front of an artist, questions are often bounding, you always talk about the same thingsThere, I would avoid doing that with you.

Important magazines in the field, influential critics, successful artists have already talked about Nico Vascellari, pointing him out as one of the best artists of promise in the Italian creative panorama and one of the most original protagonist, destined to get on in life.

Born in Vittorio Veneto ( Treviso ) in 1976, at present he is one of the artists presented by the Monitor Gallery in Roma, one of the most interesting galleries attentive to the research in contemporary art. Active and ubiquitous performer, founder of the noise-punk band With Love, he skilfully mixes physical presence and conceptual elements. He stands out as an artist that works with materiality and sound, blended with the installation and visual aspect of art. In his works, he achieves the co-presence and collision between different media, which represent different potentials in conditions of co-presence and dissonance. Thanks to his ability for inclusion and stratification, Vascellari’s works are already part of key collections and have been presented at prestigious venues, such as the Biennale in Venice , the MAN in Nuoro, Viafarini and Spazio Lima in Milan , the Tent in Rotterdam , the Palazzo delle Esposizioni in Rome , the MAMbo in Bologna and many more.

In short, Vascellari has already made his way in life (from the Fondazione Ratti , to the New York Award , from the Biennale in Venice, to the Italian Academy at Columbia University), but we decided to make a clean sweep of critiques, positive or negative, of all the opinions and comments on him going around in the world of art.

Nico Vascellari‘s approach is genuine and spontaneous, sat at a café on the occasion of Riccione TTV , we examine the reasons that generate artworks, how an artist grasps the needs of his time, where this creative immediacy, which feeds on work and passion, instinct and consciousness, comes from. Because, at thirty, in Italy , you can come out

Silvia Scaravaggi: How is your work born, where does it come from?

Nico Vascellari: My work usually generates from a lack, an absence. A great circle (2003-2004) was definitely my beginning. What I do comes from an inner need, always and anyway

Silvia Scaravaggi: What you do is very deep, very visceral

Nico Vascellari: Yes, but not only. My works are often the result of projects developed for years. This research often generates actions too, as for example in A Great Circle, Cuckoo or Revenge . Actions that consume in the space of few minutes.

Silvia Scaravaggi: Nico, let’s talk about your newest performance Revenge , presented at the Biennale in Venice (which we already talked about in Digimag No. 27, in an article by Massimo Schiavoni). In the meanwhile, Revenge has undergone metamorphoses and, at the TTV, you presented the video version that you developed after the Biennale , with an ad hoc schedule with four live performances. How was this idea born?

Nico Vascellari: I wanted the first presentation of the video to maintain some of the peculiarities of the performance. This video is a complete artwork, an artwork on itself, it has its autonomy and strength. I don’t worry about documentation, even if in this case, the video in a real video-installation, with a projection on a wooden panel that is painted and then burnt.

Silvia Scaravaggi: The original idea for Riccione was thought for an open-air location, in the area of the abandoned Colonia Reggiana. The video and the performers among the tamarisks, immersed in sand and water, in the darkness of the night. How did you conceive the interaction between the video of Revenge , painstaking and incisive, and the live show and sound manipulation?

Nico Vascellari: I try as much as possible to avoid a rhythmic and didactic interaction between sound and images. Kam Hassah, Ottaven and WW have been working in these days, using the sounds uttered by the video to create something else

Silvia Scaravaggi: How did you work, in particular, on the video of Revenge?

Silvia Scaravaggi: The audience is an essential part of your happenings. What do you think the audience understands of your works?

Nico Vascellari: I don’t concentrate much on the audience, I focus more on the art work. Though, the reaction of the audience is definitely essential. But, in order to produce a significant artwork, I try not to think much at what the audience “would like” from me, but rather I concentrate on the work and what I want it to express

Silvia Scaravaggi: Is there more reply to your work in Italy or abroad?

Nico Vascellari: Actually, I can’t answer this question, but I imagine that in Italy there must be some reply, if we’re talking about it

Silvia Scaravaggi: How much has the experience gained at the Department of Design at Fabrica and at the Course in Visual Arts at the Fondazione Ratti helped your artistic education?

Silvia Scaravaggi: In your opinion, why is your work appreciated and why not? I’m not going to ask you what is the meaning of Revenge according to youbut let me understand it.

Nico Vascellari: I have no idea of why and, believe me, whenever I suppose a why I immediately try to forget it. Art must come from inside.