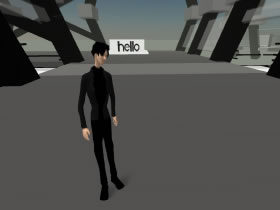 Having achieved presence, the research systematically proceeded through the study of identity, following two directions: on one side the inversion of the strategy designed for “Talker” and “Talker Performance” and, on the other side, the creation of a totally virtual identity. Ex-novo. “Dead on SecondLife” inverts the process created for “Talker Performance”. The direction changes: body shifts towards virtual.

The technological engine behind the “Talker” is used to bring famous, iconic, characters from the past back to life in Second Life’s virtual world. The texts (in their native languages) by Franz Kafka, Carl Marx e Coco Chanel have been gathered and loaded in the “Talker”’s linguistic engine; avatars have been designed to look as closely as possible to the selected characters; a software has been designed to allow the avatars to independently move through the virtual world and to interact with other avatars.

Second Kafka, Second Marx e Second Coco (5), with their thin aureole above their head to point out their existence as artificial zombies, freely stroll around Second Life, talking to other curios – and often, upset/scared – avatars with a remix of their own writings. The “Talker” leaves the abstract dimension to acquire an autonomous life and its own identity, using the memory and the iconic/evocative power represented by these cult characters to a higher level: a revisited version – and a totally realistic one – of the constructs found in William Gibson’s books. “Angel_f” (Autonomous Non Generative E-volitive Life Form) implements the complete digital being.

In “Dead on ScondLife”, history and identity are inferred through the ones of the iconic characters. In Angel_f the Talker assumes a completely independent life and identity. The personification process takes place through the application of a strong narrative line. The Talker is used to crate the identity of an artificial kid, Angel_f, initially evolving in his mother’s – the Biodoll (6) – website.

• the conceivement; Angel_F is the product of the loving relationship between the Biodoll and her lover Derrick de Kerckhove;

• the gestation; the life form evolves in its mother’s website, feeding on her interactions, eating the texts that she offers it, and following visitors around the internet as a spyware;

• the birth; its first real-world manifestation was the Bloki FreePrexxx (7), an experiment in generative publishing;

• the first explorations of the world through the context of its family relationships; Angel_f follows its mother around in her digital storms around blogs, posting her messages;

• the progressive separation from the family environment; Angel_f starts to act on its own and to define its own context and relationships;

• going to school; the Talker is used to create a blog structure through which 5 professors could load texts and articles, contributing to the education of the child:The Talker_Mind (8).

The identity grew stronger through the a large use of aesthetics and iconicity: the icon of Angel_F, the face of an indian child stolen on Flickr, is used to create a logo applied to 2 production lines (the USB pen-drives and the Bangel (9), a line of open source chocolates built around the design of the “Baci di Perugina”, replacing the romantic sentences with the sentences generated by the Talker). The narrative structure grows in complexity: Angel_f starts interacting in the real world, appearing as a relator in congresses and conventions, and even ending up in a case of international censorship. A blog is created to keep the narrative line up to date (10) telling the stories of the young AI, in first person.

The performance is in continuous evolution, bringing young Angel_F to participate to the Internet Governance Forum in Rio de Janeiro, as the only representative of the Digital Beings at the planetary discussion of the rights of Internet Users ( the IGF is an open forum promoted by the United Nations to discuss such issues), and to participate to public events on sexuality, family and digital arts.

Lately, Angel_F has been seen at the Computer Art Congress (11), to tell its story to a delighted audience. Seen the dynamic essence (life!) of this research, we don’t like to draw conclusions. It is our wish to denote the ways in which a research on our identity (and on the ones of the new forms of life) is an excellent research platform on anthropology, culture, technology, politics. Truly contemporary. The use of a narrative approach is, possibly, the single factor that was able to efficiently communicate the concepts assessed by the research: these, formally, completely and realistically defined, are still far from the perception of the general public.

By “telling stories”, the message becomes accessible and desirable. And this is a great lesson to be learned by new media arts. This integrated approach to research and narrative, in this anti-dualistic and post-human perspective, is forming under the name of Virtual Neo-Realism, Neo Realismo Virtuale (NeRVi). And this will, possibly, be the story of an interesting subject to be told in a future article.