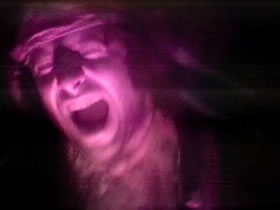 “I’m not David Lynch… but I think I deserve a better space… I’ve been working for forty years in the underground… I am an underground artist!… but since some years I’m considered an important artist. Why Triennial Design Museum of Milan doesn’t even meet me? Nobody greeted me, nobody welcomed me… my video exhibition, and it is really rare, is relegated in a marginal room of this fucking structure, with too much light and in one hour’s time… What can I do in one hour? Thirty five years ago I started to film my performances in Italy… in the 1970s we came here from the U.S.A. because you had a fertile ground, a really interesting cultural excitement… you were in the lead: what’s happening to you? You should complain to your Institutions, to the Triennial, that is your space… I tell you this because it is your city”.

These were the words of Charlemagne Palestine at the presentation of his video exhibition on Sunday May 25 th 2008 (that was preceded by a concert, at the Triennial, on May 23 rd ) organized by O’ (now O’artoteca) during inContemporanea numero due, a (polymorphic, polythematic and polyphonically dystonic) event, promoted by Milan Province, that “gather in the same place and for three days the projects of those Associations that constitute this network. Thanks to the collaboration of the Triennial, the support from Milan Academy of fine arts and the art direction of Gabi Scardi , the 15 associations, members of Milan non-profit network interested in art and experimenting in the context of contemporary visual culture (aMAZElab, AR.RI.VI, Assab One, Atelier Spazio Xpò, Careof, Connecting Cultures, FreeUndo, Isola Art Center, Museo Teo, Neon>FDV, O’, Reporting System, Viafarini, Wurmkos, Xing)”, could take advantage of this event in order to become more and more known in a potentially interesting context.

It is an explicit effort to bring joy to everyone in a city that is unfortunately accustomed to a really different Letizia (in Italian it means joy, but it is also the name of Milan mayor).

Charlemagne Palestine came to Milan and turned the knife in the wound of a city, of a country, where culture has become (as Loos would say) just mere appearance. Milan Triennial represent the era in which we live; Milan Triennial hosts but snubs, contains but isn’t: Gabibbo teaches! (don’t forget that the worst “exhibition”, organized by an Institution born during the Fascism, was “Venti di Striscia”, that lasted for one month!!!).

A video retrospective introduced by the author in just one hour time is like a Guinness world record, it seems to be impossible and infeasible: an audiovisual aperitif. In the program there were six videos, selected by the author, of his 1970s works, but, for lack of time and for the incredible improvisation of the artist, everything changed: the number of videos (abridged versions) was cut, and more importance was given to the presentation of the author who, as you will have understood, expressed his opinions about the condition of art in Milan.

Charlemagne Palestine is considered the rebellious son of musical minimalism and, in his artistic career, he often used moving images to create his own style. Since the 1970s up to present days, he created some documentaries and shorts, homogeneous from a technical and thematic point of view.

In Body Music I (1973) what is filmed is Palestine himself who, in a sterile room without any decoration, sings a mantra in a trance. In this performance what resonates in the room is the body of the artist/subject through voice and sounds produced with his own body. It was filmed in Florence in 1973, Charlemagne Palestine paid just to develop the film but earned 100,000 dollars, and in 1974 its sequel was filmed, Body Music II , where sounds and images reverberate in the hallways of a villa in Tuscany.

In this work the hand-held camera follows the artist’s movements and the sound, produced through the improvisation technique we already saw in the preceding video. The sound physicality becomes real with many details and, in this way, the public can understand how much sound can be concrete: sound is the main active character in this space made real through images.

In both videos we can find what Palestine called “les animaux” , stuffed animals that are always with him, even during his exhibitions. Then, Charlemagne Palestine showed two excerpts from two recent videos, Sonorious Lariat (2003) , Rituel dans le Vide (2001) , filmed with better techniques and less worn out than the preceding works, but with the same aesthetic features. The first one shows, in a few minutes, an Andean cowboy using a luminous lasso; its soundtrack is the usual ancestral dirge. Rituel dans le Vide is a more complex work; it lasts for 40 minutes, but in this case the artist showed just five minutes. In this video you can understand his aesthetics through images.

It seems that in these works there are all the elements of his style. In a huge New York loft, Charlemagne Palestine follows a path in quite a idolatrous way, in front of a sort of altar with two of his loved stuffed animals (a bear and an elephant, that were at the Triennial in a suitcase with other 30 fellows). So, the elements are always the same, what changes is the running time, but, there, this wasn’t evident.

So, this video retrospective about Charlemagne Palestine was like a taste of his work, it intrigued the public, but it would deserve to be more analysed.

And now (just to be paradoxical), a preface. O‘ curators (Sara Serighelli and Angelo Colombo) were really important because they brought to Milan a remarkable and interesting artist that, otherwise, would never be seen and known. Milan is still a small and provincial city; it is not its fault, but it is joy (Letizia) and similar feelings fault.